THE MURDER OF JOHN CORCORAN....

Dick Spring aptly characterised the statement in Leinster House on Wednesday , January 28th last , by the minister for justice , John O' Donoghue , on the 1985 murder of John Corcoran : Dick Spring said the reply was "...an absolute disgrace.." . The whole conduct of this case has been an 'absolute disgrace' all along. Those implicated in that disgrace are the Garda Síochána right up to the highest levels , the Department of Justice (of course) and , now - most spectacularly - Mr John O' Donoghue.

In his reply to Dick Spring in an adjournment debate on January 28th , John O' Donoghue made an intriguing disclosure - that in late 1988 or 1989 "...a garda investigation file was forwarded to the director of public prosecutions with a view to prosecuting the person involved [Séan O' Callaghan] in Northern Ireland (sic) under the provisions of the Criminal Law Jurisdiction Act 1976."

Mr O' Donoghue went on to say that "....this aspect was subsequently overtaken by events when the person was convicted on a charge of murder in Northern Ireland (sic) and received two life sentences there.....". But if in 1989 the gardaí wanted Séan O' Callaghan prosecuted for the murder of John Corcoran , why was it that they showed no interest at all in the case when Séan O' Callaghan was released from prison in the North in late 1996....... ?
(MORE LATER).

APRIL 19TH , 1970 :
" The Taoiseach was not in Dublin until late , when I made an appointment to see him next morning. I had a visit at my home later still from the Head of the 'S Branch' who gave me a copy of a report which he had submitted to the Commissioner who had directed that I should get a copy immediately."


APRIL 20TH , 1970 :
" I saw the Taoiseach shortly after noon , handed him the police report to read and gave him a full account of the events of Friday , Saturday and Sunday . He instructed me to have the matter fully investigated and to report to him at 9.30 the following morning . During the day I was kept informed from hour to hour of the progress of the police investigations and late that night the Head of the 'S Branch' delivered a continuing report to my home. My discussion with the Taoiseach that morning was restricted as the British Ambassador was waiting to see him. "


APRIL 21ST , 1970 :
" I delivered the police report to the Taoiseach and had a lengthy discussion with him. I told him that there was no danger whatsoever that a cargo of arms could be unloaded suddenly at any of the airports , that surveillance was continuing just in case , and I explained my reluctance to go over my Minister's head to him and I said , indeed, that I had qualms about approaching him, as I might be intruding on a secret Government mission. I said that in my dilemma I had spoken to the President who, without being told the nature of the subject, advised me that it was my duty to speak to the Taoiseach. The Taoiseach made no comment......."
(MORE LATER). 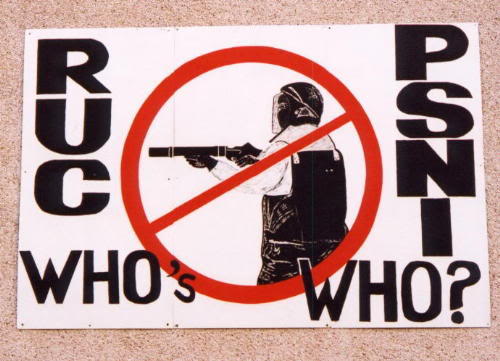 Following a meeting of the Ard Chomhairle of Republican Sinn Féin on November 19th 2011, the following statement was issued:

"The announcement on November 11 that the RUC/PSNI is to play in Croke Park on November 25 shows that the GAA is once again being used to normalise British Rule in Ireland. Bringing the British Colonial Police into Croke Park - like the visit by the Queen of England in May - contravenes the principles upon which the GAA was founded, namely the essential unity of Ireland as a nation.
This principle is reflected in the fact that the GAA has never recognised the British-imposed border but has remained an All-Ireland Association. Faithful Irish Republicans, many of whom are members of the GAA, will oppose this visit and will use it to highlight the fact that British rule/occupation in Ireland is not or never will be normal or acceptable.
Like James Connolly we say ‘England has no right in Ireland, never had any right in Ireland and never can have any right in Ireland’ . Republican Sinn Féin will be holding a protest on Friday. We will assemble at Quinn’s Pub in Drumcondra at a time to be confirmed."

The Republican Movement is to be congratulated for the stand it is taking on this issue - the political 'Establishment' in this crooked State will use any and all means to project itself as a normal , democratic leadership attempting to govern as best it can over a recession-hit electorate when the actual reality of the situation is that they are a bunch of wealthy unprincipled lying and cheating con artists , ever-ready to renege on election promises : now , again, they seek to present themselves as 'trustworthy' to those they admire in Westminster by showing how 'politically mature' they are in welcoming to Dublin members of the same British paramilitary 'police force' which enforces a British political and military writ in six of our north-eastern counties !
Republican Sinn Féin are to be commended for the stand they are taking in the face of this injustice ; to quote Oscar Wilde - "If one tells the truth , one is sure, sooner or later, to be found out."

Trade unions in this State are - in the opinion of this blog , that is - (mis)lead by a 'Top Table' of 'pet rebels' : millionaire or extremely wealthy individuals who , once upon a time in their distant past , (probably) had a social conscience and might have genuinely believed that they could effect some change for the better for the employed and the unemployed by throwing their lot in with what they believed to be like-minded men and women who claimed to be trying to improve wages and conditions for fellow workers.
We are 100% in favour of the stated objectives of trade unionism but , equally , we are 100% opposed to the weak and watery methods used by the trade union leadership in attempts , they claim, to obtain those objectives. With this 'health warning' in mind , we wish to bring this SIPTU-organised Dublin protest to your attention , and will record the fact that, in our opinion, such a protest should be held on a weekly basis , mid-week, in various cities in this State , and should end in a mass sit-down protest in the centre of that particular city. But this is 'Free State Trade Unionism' we're talking about here.....
Thanks for reading,
Sharon.