LEGAL DRUG TRIALS : ROOM FOR IMPROVEMENT.(The following information was brought to our attention by a reader of this blog , and was published in a Sunday newspaper in December 2009 : the person who contacted us did so on reading our 'Death of Niall Rush' article and , upon checking to the best of our ability, we are satisfied that that person has no 'axe to grind' re the newspaper in question and/or to the companies or individuals mentioned in the piece.)

'General Electric', one of the world's biggest corporations , is using the London libel courts to gag a senior radiologist after he raised the alarm over the potentially fatal risks of one of its drugs.

The multinational is suing Henrik Thomsen , a Danish academic , after he described his experiences of one of the company's drugs as a medical "nightmare" ; he said some kidney patients at his hospital contracted a potentially deadly condition after being administered the drug 'Omniscan'.

" The Minister was thoughtful and then said that he would like to see the dossiers on over 60 organisations of a subversive character with IRA or communist affiliations. A lot of them were mushroom growths and of little consequence and at points they entwined or overlapped with personnel wearing different hats to suit different occasions.

The Minister campaigned mostly in his own constituency with an odd foray to strengthen candidatures elsewhere. I noticed in the daily press that he was playing the 'commie card' and that he was being echoed by Fianna Fail candidates up and down the country , so apparently it was a trump."

2nd JULY 1969 :
" Fianna Fail was returned to power and Mr O Morain resumed as Minister for Justice. As the newly formed Government had some changes of portfolios I suggested to the Minister that it might be advisable to circulate a fresh memorandum to Government giving a comprehensive picture of the IRA. He approved , and the memorandum emphasised the seriousness of developments within the IRA , it pointed to the fact that a well orchestrated plan along three separate fronts - economic , political and military - was being promoted , it examined the financial position , the calibre of leadership , methods of publicity and orientation of policy powers under the law and said that while the morale and calibre of the security forces within the Garda Siochana were excellent there was a chronic shortage of equipment in the form of radio networks and radio controlled cars which had been requisitioned and refused again and again by the Minister of Finance on the grounds of excessive costs....."
(MORE LATER).

DUBLIN STREET RALLY TO COMMEMORATE THE 22 IRISH HUNGER-STRIKERS WHO GAVE THEIR LIVES FOR IRISH FREEDOM BETWEEN 1917 AND 1981....

When a soldier lays down his life
so his comrades can be free
is it not us who forced his hand
by ignoring tyranny?
when men sit by and let others die
the killing will expand
so I'd like to take a moment here
to remember Bobby Sands

Tonight I'll tuck my children into bed
under liberty's flame
and soldiers will go off to kill
so ordered in my name
how do I sleep with a price so steep
and a government so bland
maybe it's time to hit my knees
and remember Bobby Sands."
(From here: thanks to 'Jimmymac' for assisting with this post.) 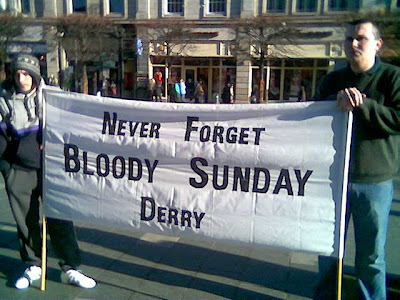 A PICKET TO COMMEMORATE THE 39th ANNIVERSARY OF 'BLOODY SUNDAY' WILL BE HELD IN DUBLIN ON SATURDAY 29th JANUARY 2011.....

A picket in memory of the 14 people massacred by the British Parachute Regiment on Sunday , January 30 , 1972 , will be held in Dublin on Saturday January 29th , 2011.
An intercepted letter to the commander of the 1st Battalion of the British Parachute Regiment , Lt. Colonel Derek Wilford , was printed on the front page of 'The Sunday Press' newspaper on the Sunday following the massacre in Derry .
It was penned by Brigadier F.P. Barclay , DSO , MCDL , Colonel , The Royal Norfolk Regiment , and says -

As an ex-parachute Brigade Commander I write to say how proud it made one feel to see the way , on TV , which your lads went into action against those blighters last Sunday . They looked splendid and , as usual , bang on the ball .

It seems to me and many others that prompt retaliatory action such as this is long overdue . It will have , I've little doubt , a most salutory effect . Should have happened long since!
I sincerely trust you successfully weather those thoroughly unjustified but seemingly inevitable brickbats and recriminations emanating mostly from those who either have no sense of law and order , duty or perspective , or who are spineless .
With best wishes to you and yours ,
Sincerely ,
Peter Barclay ,
Little Dunham Lodge ,
Kings Lynn , Norfolk."