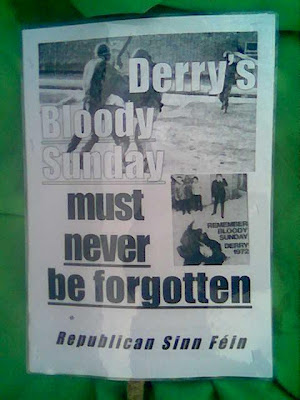 
At 11.30am today , three RSF members met , as arranged, beneath the Pillars of the GPO in O'Connell Street , Dublin , where they were each given 300 leaflets and were allocated an area in which to distribute those leaflets. As that was being arranged , about twenty-five other RSF activists were leaving Teach Dáithí Ó Conaill in Parnell Street to make their way to the traffic isle facing the GPO and, once there, proceeded to take up position , facing the GPO , and began a picket to commemorate the events of Sunday , January 30th , 1972 : 'Bloody Sunday'. 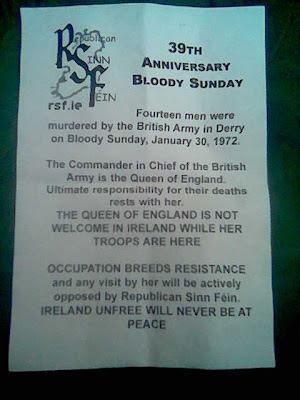 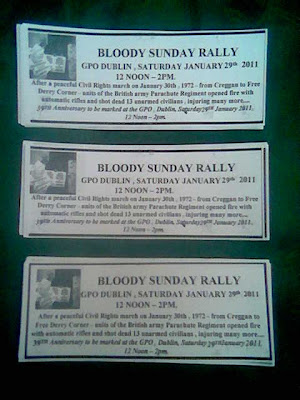 'After a peaceful Civil Rights march..'


Five 'Special Branch' operatives were 'on hand' for most of the two hours and fifteen minutes that the RSF members were 'on site' for , and they recorded the details of all present and attempted to intimidate on-lookers and tourists from approaching those on the protest , but with little success : dozens of people came over to the traffic isle to speak with the RSF members , take leaflets (of which almost one thousand were distributed) and posed between the placards and banners for photographs. 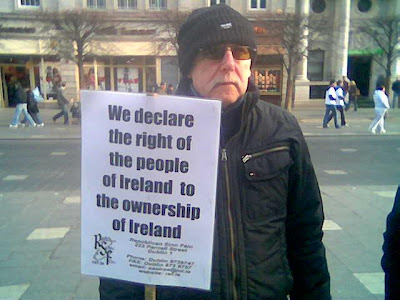 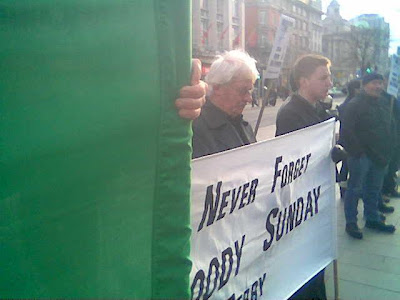 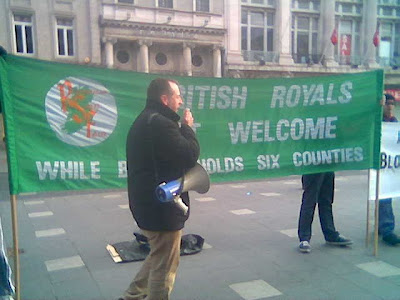 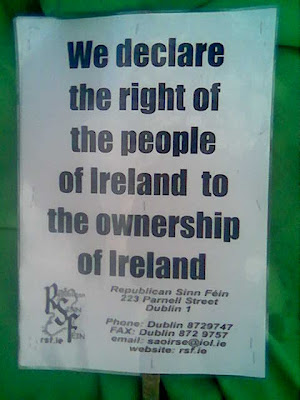 'Declaration of Ownership' placard at the picket. 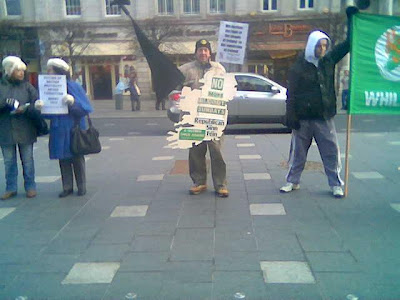 'A Nation Once Again' : one of the RSF placards on the 'Bloody Sunday' picket.


Full marks to Republican Sinn Féin for their work in Dublin City Centre today ; about 30 of their Dublin members and/or supporters stood their ground at the GPO today for over two hours, withstanding the icy breeze that seems to be ever-present in O'Connell Street , refusing to be 'moved on' by the political police and distributing almost one-thousand 'Bloody Sunday' leaflets - a 'job' well done , and appreciated by the dozens of people that came over to talk to these representatives of the Republican Movement. A full report , and more photographs , will be published in the February 2011 issue of 'Saoirse' , which goes to print on Wednesday , 9th of that month.
Thanks for reading,
Sharon.

The company admits that its product has been linked to serious side-effects in some patients , but said Henrik Thomsen accused the company of suppressing information in a presentation at a scientific congress in Oxford in October 2007.

A summary of Thomsen's presentation for the High Court writ, provided by GE Healthcare, appears to show that it was an even-handed account of his clinical experience and , when asked by this newspaper to highlight any part of the presentation that explicitly stated wrongdoing by GE Healthcare , the company was unable to do so.

The writ states that the defamation may have been "by way of innuendo.." , and this case will trigger a fresh row over the draconian use of Britain's libel laws to stifle scientific debate and silence critics. Henrik Thomsen now refuses to discuss the possible risks of the drug in any UK public forum.......
(MORE LATER).

" It (the memorandum) mentioned the steps that might have to be taken to enforce the rule of law and I was satisfied that re the problems, in all their seriousness, the various options open to the Government to contain them and the necessity for decisive action were fairly set out.

The arguments indeed were a repeat in a general way of arguments put to the then Minister for Justice , Mr Haughey , and in turn to the then Taoiseach , Mr Lemass , in November 1961. In particular it emphasised again that the time had become opportune to drive a wedge between the rural members - the old faithfuls - and the doctrinaire republicans , mainly based in Dublin , who were sedulously propagating the gospel of a 'Workers Socialist Republic'.

I was given no indication of Government thinking following their consideration of this document . The IRA split in December 1969 into the 'Officials' - the socialists - and the 'Provisionals' . In December 1972 , Mr Blaney was to claim in the Dail that he and a lot more with him had set up the 'Provisionals'......."
(MORE LATER). 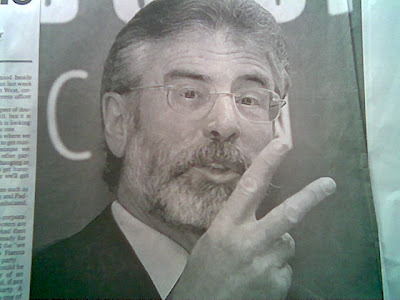 British Crown Steward and Bailiff of the Manor of Northstead , Gerard Adams, to seek a seat in Leinster House....

Good news at last!
Amidst all the election chatter and the announcement of the IMF's 'new boy' in Fianna Fail , it was announced today that one Mr Gerard Adams , late of the parish known as 'Irish Republicanism' , had been granted , and accepted, an 'Office of Profit under the Crown', thereby publicly acknowledging that he is an "Employee of the Crown".
This indeed is a glorious day , politically speaking , for us little people : the IMF's Mr Martin will 'fix' this corrupt State and take it back , morally , physically and financially , from the clutches of the bigger crooks in Brussels and Washington that , only a few months ago, he couldn't wait to hand it over to, and Mr Adams has at last received his just rewards , and will herald yet another 'historic' day when he becomes the first ever Belfast-based 'British Crown Steward and Bailiff' to campaign for a seat in Leinster House , a 'parliament' which his now-public employers , the British Crown, actually established - some would say "inflicted on us" - in 1922.
We trust that Mr Adams will be proud enough to give his full name and title in his nomination forms and on the ballot paper : Gerard Adams - Crown Steward and Bailiff of the Manor of Northstead.
We hope he does , as it suits him.
This just in from Crown Steward Adams' employer-
'26 January 2011
Manor of Northstead

The Chancellor of the Exchequer has this day appointed Gerard Adams to be Steward and Bailiff of the Manor of Northstead.

Non-media enquiries should be addressed to the Treasury Correspondence and Enquiry Unit on 020 7270 4558 or by e-mail to public.enquiries@hm-treasury.gov.uk

This Press Release and other Treasury publications are available on the HM Treasury website hm-treasury.gov.uk For the latest information from HM Treasury you can subscribe to our RSS feeds or email service.

...and a few words from Crown Steward Adams' employers can be heard here.
Once again , Gerry , a Chara - Congrats! We always knew you had it in you.....
Thanks for reading,
Sharon. 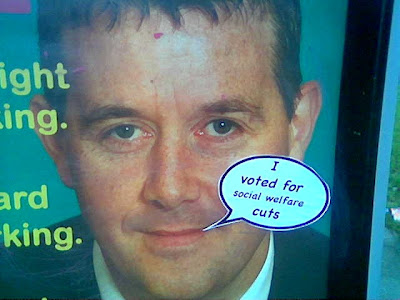 The above bus-shelter election poster , located in the Cherrywood area of Clondalkin , Dublin , was recently 'adjusted' (by persons unknown) by the addition of that speech-bubble , reminding passers-by that the Green Party , although ever-ready to give the impression that they are in coalition with Fianna Fail to 'safe-guard the working class' and/or some such nonsense are, in fact, in coalition with Fianna Fail to simply secure careers and pensions for themselves : a State election ('General Election') will be held here on Friday 11th March 2011 and , as before, we repeat our call for a 'None Of The Above'-vote re same. 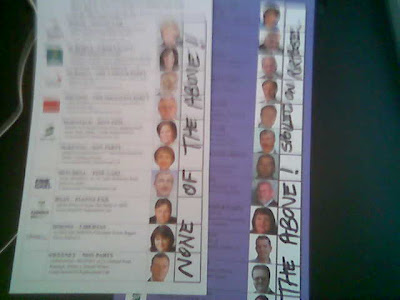 In addition to the reasons outlined via that last link as to why a 'NOTA' vote is the only genuine protest vote - which will register as showing opposition to the political system as much as it will show opposition to those that leech a cosy living from operating that corrupt system - a 'NOTA' response will also signal the voters understanding that this State is now governed by the IMF , regardless of which shade of political gangster actually sits in Leinster House. We will return to this issue before the 11th March election....


Friends of ours in Kildare have asked us for a 'plug' re a fund-raiser they have organised for Saturday , 19th February 2011 , in the 'Town House Pub' in Naas , County Kildare : a ballad session will be held on that Saturday , with the doors opening at 9pm , admission is €5 per person and a raffle will be held on the night. That is going to be one good night out , as we know the organisers and not only are they very professional in this type of work but they have secured the services of an entertainer for the night whom we know of , but we have been asked not to 'name names' , as the event could very well be over-subscribed if too much information is divulged. Suffice to say you definitely won't be disappointed if you attend!
Thanks for reading,
Sharon.