Evan Harris , a former hospital doctor and the Liberal Democrat science spokesman, who is leading the parliamentary campaign to reform the libel laws, said : "It is hard to conceive a stronger public interest than scientists and clinicians being able to discuss freely their concerns about drugs or devices used on patients. Libel laws should not be used in this way."

More than 48 million doses of Omniscan have been given worldwide and it is safe for the vast majority of people. It is one of a number of 'contrast agents' containing the potentially toxic metal gadolinium , which are used to enhance images for magnetic resonance imaging scans.

Omniscan and other products have been linked with a skin condition in kidney patients , known as nephrogenic systemic fibrosis. Sufferers can be confined to a wheelchair and may even die from related causes. Regulators in Europe and the US are now taking action over the potential risk from Omniscan and two similar products.......
(MORE LATER).

'MAGILL' Comment : 'When Northern Ireland erupted in mid-August 1969 , one of the decisions taken by the Government in the South during a series of emergency cabinet meetings was to establish an inter-Departmental Committee , consisting of the Secretaries of the Departments of Justice , Defence , External Affairs and Local Government , to keep the situation under continuous review and advise the Taoiseach in the matter.

This committee never functioned successfully but it was under that sanction of this Government decision that the Secretary of the Department of Justice was to have direct access to the Taoiseach. It was during this period that the Minister for Justice , Mr O Morain, specifically authorised Mr Berry to go to the Taoiseach directly in his (ie the Minister's) absence.

Mr Berry was anxious to document the authority for his access to the Taoiseach to refute a persistent charge made about him by Kevin Boland that he was operating on a 'lettre de cachet' basis in going to the Taoiseach.......
(MORE LATER).

'BLOODY SUNDAY' PROTEST IN DERRY TO BE HELD AS USUAL.....

The 'Bloody Sunday' protests and pickets that have been held since 1973 in Derry , Dublin and elsewhere take place to highlight the fact that , on that day (Sunday 30th January 1972) , the British State massacred 14 unarmed men who were taking part in a peaceful 'Civil Rights' march. The best manner in which to keep that issue fresh in people's mind is to take to the streets in remembrance of what took place that day and , with that in mind , we are delighted to be able to publish the following statement from the Republican Movement :


BLOODY SUNDAY :
Republican Sinn Féin oppose the decision to end the annual "Bloody Sunday" march in Derry. We view this as an attempt to sanitise the deaths of 14 Irish people at the hands of the British Army.
We support the relatives who are calling for the annual march to be continued and Republican Sinn Féin will facilitate a march in Derry to mark the 40th anniversary of "Bloody Sunday" next year and in future years.
The Saville Inquiry did not mark an end to the story of "Bloody Sunday". It failed in the crucial task of holding to account the British government and the political and military chain of command.
Ends/Críoch
For confirmation contact:
RSF/Sinn Féin Poblachtach ;Phone: +353-1-872 9747//Fax: +353-1-872 9757.

As stated , we welcome this development from the Movement. 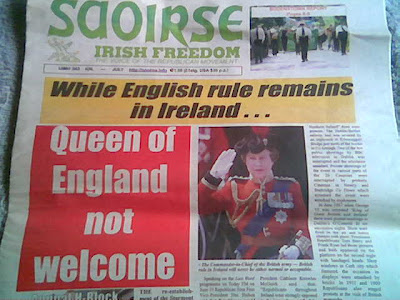 A sneak preview of the forthcoming updated 'Saoirse' website - still needs to be 'tweaked' a wee bit , but will be a powerful addition to the Movement when fully completed!
Congratulations to all involved : if the new website is as successful as the monthly newspaper itself , the hard work will be justified !
Thanks for reading (the blog and 'Saoirse'!),
Sharon.