Five people in Britain have died from possible side-effects after being given 'Omniscan' , according to the 'Medicines and Healthcare Products Regulatory Agency'. Patients have launched legal actions in America involving more than 170 deaths where it is claimed 'Omniscan' and similar drugs may have been a factor.

Safety problems with the drugs have been highlighted in the US by the independent investigative news organisation 'ProPublica'.

Paul Flynn, the Labour MP , said - " It is a scandal that a company should take action against someone acting in the interests of patients..." but 'GE Healthcare' said it had launched a libel action against Henrik Thomsen as a "last resort...."
(MORE LATER).

MID AUGUST 1969 :
" I informed Mr O Morain that I contemplated retirement from the Secretaryship of the Department of Justice in the following January , when I would have completed a full 43 years in the public service, as it would be my entitlement to retire having attained 60 years of age. I did not give any reasons to the Minister but he would have been well aware of my general dissatisfaction with the way that the Department was being conducted and , in particular, with the way that I had been treated by him and his Government in the previous November when I had been made the scapegoat for a Ministerial decision for which I had been pilloried in the Dail and the public press......"

'Magill' Comment :
This was a reference to the controversy over the Comptroller and Auditor General's report which referred to the refusal of the Department of Justice to reveal the contents of a file which dealth with the operation of the Secret Service Fund. The specific issue was an arrangement with the former head of the Special Branch , Phil MacMahon , whereby he was paid from this fund for 'consultancy services' to the Special Branch after his formal retirement from the force.

This arrangement had been made by Brian Lenihan, then Minister for Justice , and with the specific knowledge and approval of the Taoiseach. When controversy arose in connection with this file , Mr Lenihan repeatedly avoided accepting responsibility for the arrangement and the then Taoiseach , Mr Jack Lynch, also failed to explain that Mr Berry was merely acting in accordance with a Ministerial decision.

This refusal to stand over a decision infuriated Mr Berry , for it vitiated the very essence of the relationship between members of a government and civil servants.....
(MORE LATER). 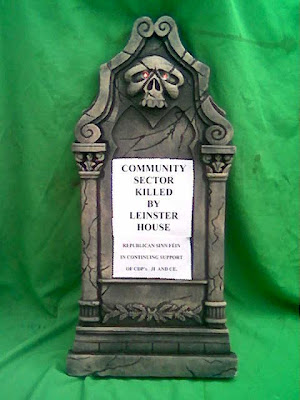 For the second time in two years , low-paid workers in the 'Community Sector' (JI / CE) in this State have had their wages reduced - illegally - with no consultation , negotiation or agreement.

Trade unions involved in this issue have asked their members to use the present State election campaign to their advantage and , instead of being canvassed by politicians , to canvass them instead ; JI / CE workers have been asked to present the following 'pledge' to all candidates , for their signature -

As Job Initiative workers , we deliver vital community services including childcare , after-schools and eldercare. However , as workers , we are denied the basic workers right re negotiating our pay and conditions ie collective bargaining.

Over the past two years our pay has been illegally cut , twice , on the direction of FÁS , without negotiation , agreement or consent.

As constituents , we are seeking your support so that Job Initiative workers and their union representatives can negotiate directly with FÁS , the agency that currently determines pay and conditions.

We ask that you contact the Minister for Social Protection in relation to this matter and strongly urge that Minister to respect the basic right of Job Initiative workers to negotiate their pay and conditions.

On behalf of Job Initiative workers."

Republican Sinn Féin has voiced its support for these and other low-paid workers , and is proud to have been on the streets with them , at protest marches , pickets , meetings etc and intends to maintain its position in favour of these workers , in this and any other campaign that seeks to obtain justice for them.

RSF's track record in relation to this particular issue can be seen here .

Thanks for reading ,
Sharon.