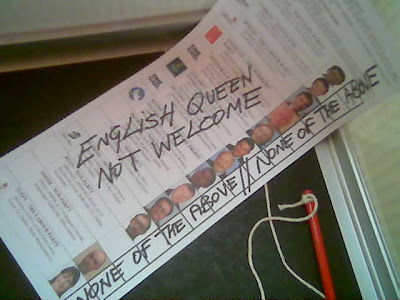 
This blog has received photographs and verbal confirmation that pro-'NOTA' and anti-'queen' votes have been made in at least 17* polling stations in the Dublin Mid-West constituency , and surrounding areas , including Tallaght, Ballyfermot and Bluebell. This campaign was started by three individuals in the Neilstown area of Clondalkin and , although none of them are members of any Irish Republican organisation , they are solid supporters of Republican Sinn Féin and have been for decades , and are highly regarded and valued as such by the local Cumann of the Movement. They , and their equally 'NOTA'-inclined friends approached members of the Clondalkin-based Maire Drumm/Kevin Barry Cumann of Republican Sinn Féin Poblachtach and an agreement was reached : in return for writing 'None Of The Above' and an anti-English 'queen' visit message on ballot papers , RSF would use its local network of contacts to distribute the leaflets provided by the pro-'NOTA' people - resulting in thousands of said leaflets being distributed in the locality and pro-'NOTA'/anti-'queen' messages being wrote on ballot papers in an area reaching from Balgaddy in North Clondalkin to the foothills of the Dublin mountains , in Tallaght, and down towards Dublin City Centre as far as Inchicore!
(*Final 'tally'[!] - 22 polling stations.) 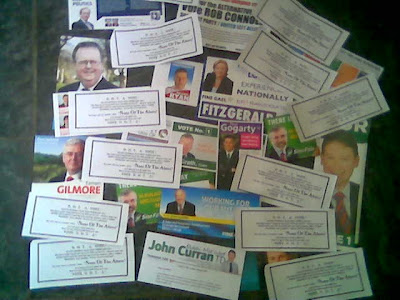 Political candidates - 'None Of The Above'. 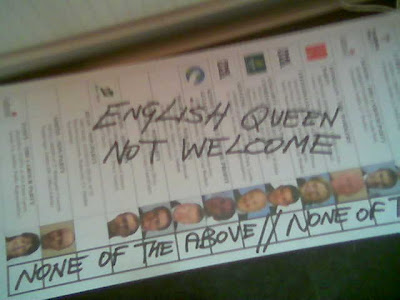 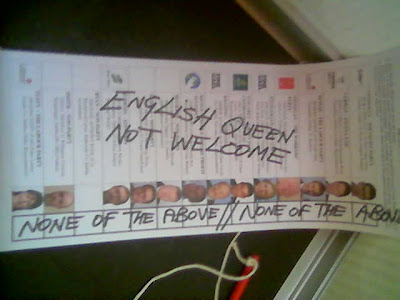 No welcome for wannabe or existing Free State politicians or English 'queens' !


This blog congratulates those involved in this (at the time of writing) on-going campaign , which will continue until 10PM tonight : hopefully , this campaign will prevent one or more Free State politician (or 'wannabe') from enriching themself in Leinster House and has encouraged dozens of people to take part in a political campaign who otherwise would not have got involved - plus , of course , Republican Sinn Féin , in that huge catchment area , has gained the trust and confidence of many people that it might not have otherwise been possible to reach : 'winners all round' except , of course , a few Leinster House politicians and their 'wannabe' colleagues!
Well Done!
Thanks,
Sharon.

LEGAL DRUG TRIALS : ROOM FOR IMPROVEMENT. (The following information was brought to our attention by a reader of this blog , and was published in a Sunday newspaper in September 2010 : the person who contacted us did so on reading our 'Death of Niall Rush' article and , upon checking to the best of our ability, we are satisfied that that person has no 'axe to grind' re the newspaper in question and/or to the companies or individuals mentioned in the piece.......)

Three volunteers were hospitalised last week after suffering violent seizures during drug trials at a private research clinic in Cork. The young men are reportedly recovering and the nine others involved in the test are being monitored at the clinic. The trial itself has been terminated.

Rising unemployment has resulted in a surge in numbers applying to take part in clinical trials , where volunteers can make up to €130 a day. The practice whereby wealthy corporations often pay impoverished individuals a pittance to risk their health is outdated and grotesque.

Clinical trials must be in accordance with European law , but some pharmaceutical firms go to great lengths to idemnify themselves against litigation if their human guinea pigs experience ill effects - which speaks volumes about the safety of those experiments.

" The statement was written on foolscap sheets of a pink colour which I habitually used in giving directives in my Department and of which I kept a stock at home as I was used to taking home files for urgent completion. It ran to several pages and , amongst the items recorded was information that in the previous week a Cabinet Minister had had a meeting with the Chief of Staff of the IRA (Cathal Goulding) , at which a deal had been made that the IRA would call off their campaign of violence in the 26 Counties in return for a free hand in operating a cross-border campaign in the North.

I was told - and I reported it to the Minister - that the Army Council of the IRA could not understand the Taoiseach's statement of 19th August as it had been accepted that the Cabinet Minister was speaking to their Chief of Staff with the authority of Government.

The Minister questioned me as to whom the police officers named as the Cabinet Minister and I said that they did not name anybody and that I did not ask , that in matters of that kind a discretion had to be exercised by the police to prevent their sources of information being disclosed and that there was a normal reluctance on their part at all times to give all the information in their possession which might be so close to the bone as to identify their sources......."
(MORE LATER). 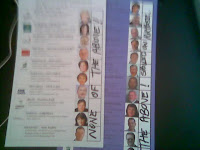 This coming Saturday (26th February 2011) , Republican Sinn Féin will hold a one-hour protest (from 12.45pm to 1.45pm) on the traffic isle facing the GPO in O'Connell Street , Dublin , in opposition to the proposed visit to this country by an English 'queen': a similar protest will be held on Wednesday 9th March 2011 , at the Kildare Street gates of Leinster House , from 4PM to 6PM. We hope our Dublin-based readers will attend either one protest or the other or, preferably - both!

In a statement in relation to the proposed 'queen of England' visit , the President of Republican Sinn Féin, Des Dalton, stated:

"The proposed visit of the Queen of England to the 26-County State is intended to signal that British occupation and the partition of Ireland is now normal and acceptable. A visit by the head of the British State while that state continues to occupy and partition Ireland be opposed.
Republican Sinn Féin will lead an active campaign of opposition and will be calling on all Republican minded people throughout Ireland to come out and make their voices hear in protest.

In 1911 patriots such as James Connolly, Maud Gonne and Helena Maloney among others led Republican and progressive resistance to a similar attempt to pacify Ireland with a British Royal visit. They did so under the banner 'Thou art not conquered yet dear land' and in 2011 those who have neither been purchased nor intimated will be sending out the same clear message.
Continued British Rule in Ireland is an obstacle to achieving a just and lasting settlement for all the Irish people and must be removed if we are serious about creating real All-Ireland economic and political democracy."

We hope to see you on Saturday 26th February next at the GPO and/or on Wednesday 9th March next outside Leinster House. And bring a friend.....!


3 MORE REASONS FOR VOTING 'NONE OF THE ABOVE' :

1) By voting for a candidate - perhaps because you consider him/her to be 'the best of a bad bunch' - you are in effect agreeing to not partake in decision making by transferring the authority to do this to a bunch of 'political experts'.


2) The use of the 'party whip' system undermines the ability of representatives to represent those who elected them and instead their representation switches to the party which is not the same thing.


3) You are electing a person based on promises to do something but there is no mechanism of immediate recall if this does not happen except , in this particular type of election , four/five years after the event when the damage caused by the broken promises will be long established.

This State cannot afford any more John O'Donoghue's , nor do we deserve any more of his type : use your vote wisely on Friday 25th February next - write 'British Royals Not Welcome' and/or 'None Of The Above' on it !
Thanks,
Sharon.