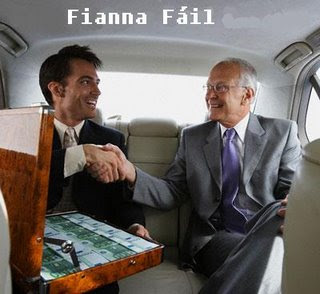 The Rise And Decline Of Fianna Fail , by Kevin Boland - Mercier Press.

The analysis of the role of Fianna Fail , and the associated necessary synthesis of a replacement with a stronger socialist component , capable of taking the Irish revolution a stage further , has been the primary task of the Left since the 1930's.

The comprehensive and consistent failure of the Irish Left to address this task requires explanation, but this is another day's work.

Into the ensuing theoretical vacuum, however, have come two books which , while not fulfilling the needs may provide stimulus and raw material for those who are perceptive enough to understand that this task is still at the top of the political agenda.......
(MORE LATER).

" The Minister asked me for my opinion as to who it might be and I named a particular individual , saying at the same time that I had no reason other than his penchant for indiscretions. The Minister said 'it could be Neil Blaney or Kevin Boland'. He read the statement a couple of times , discussed it with me and put it in his brief case.

When the Minister returned after lunch , after the government meeting, he sent for me to discuss another matter and I took the opportunity to ask him if there had been any developments arising from the statement. He drew it from his bag and handed it to me - he had made notations diagonally across the left-hand top corner.

He said that he had read it to the meeting , adding that that was the last time that he would bring anything like that to the notice of all the members of government , that he would bring it direct to the Taoiseach. He said that no Minister had met Cathal Goulding and went on to say that Charlie Haughey had mentioned that he had been asked to meet some fellow from the IRA but that he had not paid heed to what was said , that it was not of any consequence......."
(MORE LATER). 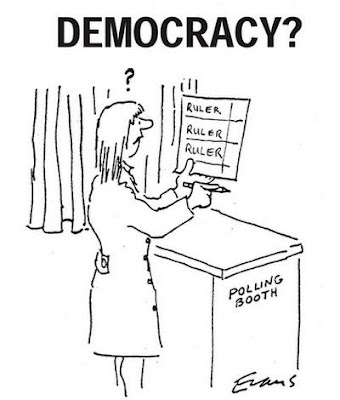 AN ATTEMPT TO USE STATE APPARATUS AGAINST THE STATE....

Most of our readers will be aware that this blog , and the RSF organisation overall , have been involved for a number of years now in support of thousands of low-paid workers in this State who have been financially penalised by the State for the 'mistakes' (ie gambling incompetence) of big business-people and property developers etc who , through their own greed , bankrupted the State then put pressure on the political parties that they had purchased and instructed them to bail them out - which they did , at our expense, by financially and morally prostituting the working-class and the unemployed to the IMF and Brussels.
In 'fighting back' against this injustice , some of those low-paid workers (full history here) encouraged their trade union to legally challenge the 'right' of the State to deduct their wages and , following various meetings between the workers , their appointed representatives at ground level and the trade union(s) involved , a form of wording was agreed and a case was lodged in the 'LRC' under 'The Payment Of Wages Act 1991' to seek the return of all monies from wages which have been stopped by , in this particular case , the 'FAS' agency , which is the actual 'employer' in this instance.
Those low-paid workers are now being notified that their case will be heard , in Court, over a three-day period this month : if justice were to be done , they would win their case outright via 'technical' reasons alone apart , that is, from the morality involved in the State 'docking' each lowly wage-packet between €30 and €50 each week - we are aware of the Court defence to be entered by the workers and of a possible/probable 'Plan B' to be used by them , in the event that it becomes necessary to do so but , for obvious reasons, we won't be outlining same here.
We wish these workers every success in this endeavour , but would caution them against expecting too much : after all , one 'arm' of the State is being asked to challenge another , on behalf of low-paid and poorly-represented workers (ie no political 'clout') in an action which will not only embarrass the State and cost it , financially but will , and rightly so , 'open the floodgates' to a 'raft' of similar cases.
Win or lose , RSF will maintain its support for these , and other , workers , and for the unemployed.
As it should be !
Thanks,
Sharon. 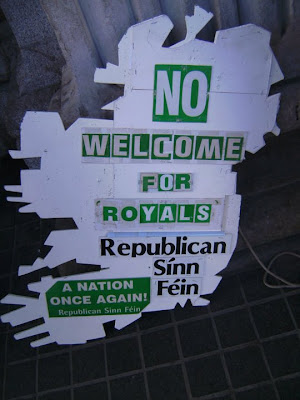 About twenty members and/or supporters of Republican Sinn Féin in Dublin held a ninty-minute anti-'royal' picket on the traffic isle facing the GPO in O'Connell Street yesterday , Saturday 26th February 2011 , and had set-up a stall under the pillars of the GPO to collect signatures in support of the motion that an English 'queen' is not welcome in Ireland whilst her armed forces continue to militarily and politically enforce a claim of jurisdictional control over any part of Ireland . 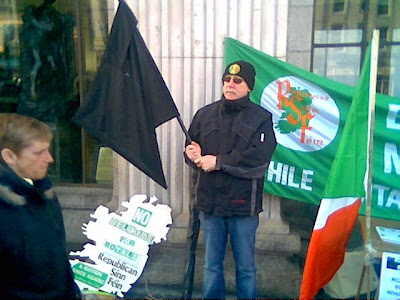 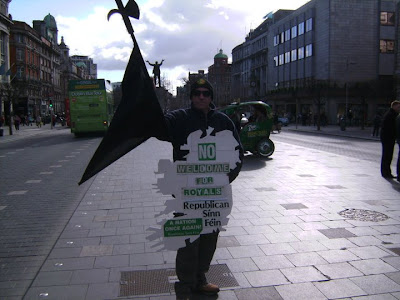 A Republican message from the steps of Dublin's GPO to the English 'establishment'. 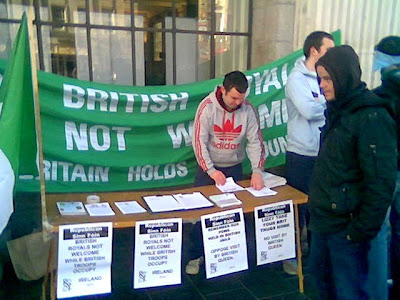 
Hundreds of RSF recruitment leaflets and anti-'royal' visit leaflets were distributed over the ninty minutes , and dozens of signatures for the petition were collected , in what was a well-organised and well-executed 'job of work' by the Movement , which was well received by all passers-by , locals and tourists - indeed , the only objection came from the two members of the 'Special Branch' (Political Police) , who attempted to practically 'close down' the stall and , when that failed , contented themselves by trying to turn on-lookers away : however , that endeavour too , failed , so they retired to their car and observed proceedings from there.
Full marks to the twenty-or-so Irish Republican activists that carried-out this initiative and to Republican Sinn Féin for organising same - a good day's work!
Thanks for reading ,
Sharon.