LAW IN DISORDER.
The state trumpets every drugs seizure as a major victory over the barons. But the war against drugs is really a murky world characterised by botched operations , questionable use of informers and ego-driven squabbles between the Garda Siochana and customs officials.
Mairead Carey gets the inside story.
From 'MAGILL' magazine , August 2002.

Garda Commissioner Pat Byrne and Assistant Commissioner Kevin Carty are likely to be subpoenaed as witnesses in a libel trial that threatens to display publicly for the first time the dirty linen between the two state agencies designated to fight the battle against drugs in Ireland.

The case , involving six customs officers from Bantry in County Cork and 'The Sunday Business Post' newspaper, is a left-over from the Urlingford debacle , which saw conflict between the Garda and Customs result in the failure of one of the biggest drugs operations seen in this country.

The case is listed for hearing during the next court term - " If it goes to trial, " says one legal source, " half the top brass of the guards will be brought in to give evidence....."

" Compare that with Col. Hefferon's at Para 11167 - " I am not clear specifically on the date - it could be November - Mr. Gibbons asked me to see him and told me that the Taoiseach had had a report from Mr. Berry and Captain Kelly had attended a meeting at Baileboro.......at which there were IRA people present , that he had there waved a wad of notes around , promising money to them ".

No person with a scrap of intelligence could doubt that the Taoiseach was made aware by me on 17th October - the date of my medical tests is verifiable in the hospital records - of information of a most serious kind in relation to a plot to import arms and that he avoided making any more than a cursory enquiry. Indeed , I formed the impression from time to time that he was consulting me to find out how much I did not know and that he was not thankful to me for bringing awkward facts to his notice.

My communication to the Taoiseach in this instance was in pursuance of the directive from Government of 14th August 1969 , as interpreted by my Minister , Mr O Morain ; and Mr Kevin Boland , as a member of government at the meeting on that date , should have been aware of the directive....... "
(MORE LATER). 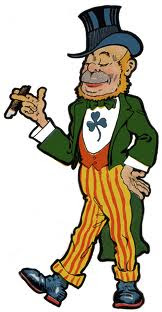 A Free State political seoiníní , similar to the gaimbín that have , once again , come to the fore in their fawning and genuflecting over , and in the presence of , members of the British 'royal family'.

In a unified display of shameful and putrid verbal diarrhea , the media and the political 'establishment' in this morally and financially bankrupt and corrupt State have been attempting to out-do themselves in broadcast/print curtsey to the English 'queen' who is presently on a State visit here : television , radio , print and on-line journalists have repeatedly told their viewers/listeners/readers just how "privileged" they are to be sharing this "rich in significance" occasion , as they see how "the great and the illustrious carry themselves in the company of Her Majesty..."

This blog would like to apologise to the honest and respectable people reading this post and point-out to those who , like us, are offended and embarrassed by the grovelling of the political and media 'establishment' here in relation to the visit of these 'royal' people, that we Irish are not all oafs : various Irish Republican organisations , to their credit , protested often and loud at each and every venue where the parasites - both Irish and British - ventured , escorted by militarly muscle (including snipers located on rooftops throughout Dublin) but the Republicans done their best , in the face of an unruly and armed 'police' force and a hostile media, to get their message out that not all of us are prepared to roll over and have our bellies tickled by the 'royal family' and their hangers-on.

Even though the 'Butchers Apron' flew over Dublin , the UDA were 'officially' in Dublin and saluted it as did the Orange Order - invited by Mary McAleese , and not for the first time - and Dublin and other cities were effectively placed under martial law , Irish Republicans publicly opposed the 'visit' (takeover) and voiced their objection on the streets .
Congratulations to all those organisations and their supporters , and shame on those who invited - bowing and scraping - the British 'royal family' to this country : the struggle for full Irish Freedom continues , and will continue , until the British political and military presence is removed from Ireland !
Thanks for reading ,
Sharon.