The Urlingford issue marked a new low in the relationship between Customs and the Garda , but there was more to come : Customs documents stolen from Dublin Castle and leaked to the media highlighted concerns about other cases in Dublin.

They were also worried about the Garda dealings with a side-kick of the Cork drug lord , Tommy O' Callaghan , concerns which were also raised by a former member of the Garda , Jack Doyle . Today , the two agencies are still involved in a turf war - customs officers throughout the country (sic) say relations with their Garda counterparts are as bad as ever , if not worse.

The two forces are supposed to work together , share intelligence and share the spoils in the fight against drugs but customs officers complain that the information is given on a one-way basis only , and they point to two major Garda seizures of drugs and cigarettes in the last six weeks to prove their point.......
(MORE LATER).

It was known to me , of course , that it was known to Mr Wymes that he owed his appointment as Assistant Commissioner to Mr Haughey ; he was about twentieth in the order of seniority in 1963 and was not the nominee of the then Commissioner , Mr Costigan. Likewise , Mr Wymes was aware that he was not favoured by the then Minister for Justice , Mr Lenihan - when the question of selecting a successor to Mr Carroll was raised in March 1968 - and that it was largely due to Mr Haughey that he was given the post of Commissioner.

In such circumstances it would have been only natural that Mr Wymes should hope against hope - as I did myself - that the police information was not true in relation to Mr Haughey, or that at least whatever he was doing was Government policy......." 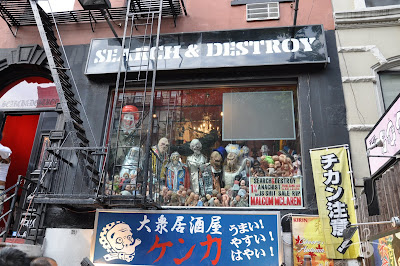 
As you may have guessed (!) , I'm having a very hard time putting our recent New York holiday behind us and those of you who have been there for a holiday will understand why that is , whereas those of you who haven't probably won't have a clue as to why I am still in mourning.... :-(

.....however - I couldn't let the holiday pass without mentioning one of our best shopping experiences , in a rather racy establishment , pictured above , where Lady Gaga , amongst other famous people , can regularly be found : but a word of caution for those who would be what I consider reserved/prudish - shop elsewhere !

It's worth buying something - anything ! - in this shop , just to get your hands on one of their plastic bags : 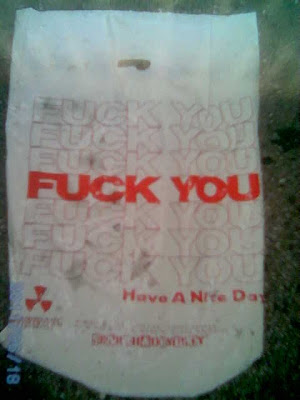 .....now you know why I told you it is a "rather racy" store - but it's a brilliant experience. Just like the City itself....
Thanks for reading - I hope to have the NYC 'bug' out of my system in the next few days.....