Almost a year after the Urlingford operation , a secret Customs dossier was reported stolen from Lord Edward Street in Dublin where Customs are based ; the documents ended up in the hands of anti-drugs activists in the city , and were also leaked to a number of journalists.

It was Christmas week 1995 , six weeks after Urlingford , when Customs officials pulled 29-year-old Declan Griffin over as he made his way through the 'Blue Channel' at Dublin Airport : in his bags they found four packages , wrapped in black tape , which contained three kilos of heroin and over 2,000 ecstasy tablets with a street value of over one million Irish Punts. Outside in 'Arrivals' , Detective Garda Denis Palmer was waiting for Griffin . Customs hadn't been informed of any 'controlled delivery'.......
(MORE LATER).

" I received a phone call late one evening from Gardai HQ to say that a group of men armed with rifled weapons had been arrested by uniformed Gardai in a disused house near the Border in County Donegal . Instructions were sought , so I informed the Minister.

He telephoned me back soon afterwards to say that he had consulted the Taoiseach and that they (a barrister and a solicitor) wanted to know what charges could be preferred and with what consequences. I replied that there were several courses open : (1) let them go , they had surrendered peacefully although they outnumbered the Gardai three to one, but their weapons could be confiscated / (2) they could be charged with unlawful possession of firearms which was a summary offence usually punishable with a fine of one Irish Punt - I mentioned that they could not be held in custody on this charge / (3) if it was the desire to hold them in custody it would be necessary to prefer charges of unlawful possession of firearms with intent to endanger life or property but , I added, while they could be held temporarily that charge could not be made stick when they were brought to Court.

The Minister telephoned back - the Taoiseach wants to throw the book at them , the indictable charges are to be preferred and they are to be lodged in Mountjoy Prison. I gave the necessary instructions and this seemed to indicate to me that the Taoiseach wanted it to be seen publicly that the Government would not tolerate any activity connected with violence......."
(MORE LATER). 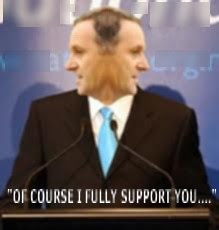 
And that , in a nutshell , is what this is all about : a majority of people in Roscommon (and,probably, elsewhere in this IMF State...) are disgusted with the Leinster House politicians they voted for in the 'General Election' which was held here on Friday 25th February last , because the Fine Gael and Labour candidates that were elected in Roscommon have renaged on election promises made during the campaign in relation to Roscommon Hospital.

"Here we go again; as they appear from the wood work
Promising and speaking party rhetoric and waffle
Their wholesome and goodness act makes me irk
With minders in tow, through towns they waddle.

All on offer, their coffers now open
Shaking hands, kissing babies and pretending to listen
Hospitals, roads and schools, their voices will deafen
Be wary of promises that sparkle and glisten......"
(From here.)

.....in the opinion of those of us who put this blog together , that anger is mis-placed : those voters should , first and foremost , be angry , sickened and disgusted with themselves for believing those promises and for voting accordingly : the politicians who fooled them were only doing what comes naturally to them (ie "...tell 'em what they want to hear...") and should be only second 'in line' to be held to account ; the top of that queue should be reserved for those amongst the Roscommon protestors who , in February last , actually voted for the same politicians they are now protesting against !

And , at the next chance they get , those same voters/protestors will fall for it again and elect a 'different' political snake-oil salesperson , possibly from Fianna Fail , the Greens , Provisional Sinn Féin or some other politically-warped outfit.....

.....which is why we advocated a 'N.O.T.A.' vote in that 'General Election' and will more than likely be doing so again on the next occasion. Those with a vested interest will tell you that such a vote '....is a wasted opportunity..' but , in our opinion, the real 'wasted opportunity' is in not voting against all of those who want into Leinster House to maintain this corrupt political system and make a very comfortable living for themselves at the same time , at your expense.
Thanks for reading,
Sharon.