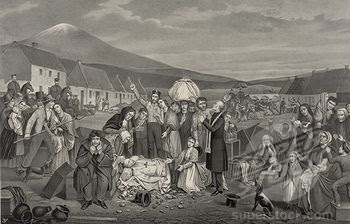 IRELAND 1871 : EVICTIONS , THE 'WESTMEATH ACT' AND THE BIRTH OF A CHILD TO THE SMYTH FAMILY IN LONGFORD....


In 1871 in Ireland , as evictions were being carried-out on a large scale , the British Parliament in Westminster realised that, as ever, there were still armed groups in Ireland that were not prepared to accept the genocidal diktat from the British as to how or, indeed, whether , they should live or die : amongst the measures employed by the British to destroy the Irish Rebels was the 'Westmeath Act' , which became 'law' in that year (1871)and which encouraged "....the arrest and detention without trial of persons reasonably suspected of membership in a secret society....."
Into this turmoil , a child was born to the Smyth family in Longford - a son , Patrick , who grew-up to be a good 'loyal subject of the crown' and , as such, wanted to 'serve queen and country' : he joined the 'Dublin Metropolitan Police' (seen here trying to drive striking workers off the streets of Dublin during the '1913 Lockout') and rose to the rank of 'Detective Sergeant' , and was known to viciously detest Irish Rebels of any class , creed or gender : he took particular delight in harassing Irish Republicans and , following the 1916 Easter Rising - which he appeared to have taken as a personal slight - he 'upped the ante' regarding his outright hatred of all things 'anti British' to the extent that he was warned by Irish Republicans to cease his activities against them - but he refused to do so.
On this day 92 years ago - 30th July 1919 - Detective Sergeant Patrick Smyth , having spent the day and evening 'serving queen and country' , returned to his home , alive, for the last time.......
Thanks for reading ,
Sharon.

In relation to the incident at Dublin Airpoprt , Det Sgt Denis Palmer said he was "horrified" to learn that Declan Griffin was caught with drugs , and was only there to meet him to get information about an unrelated crime. The jury of eight men and four women took just over an hour to reach a unanimous decision in the case : Griffin was acquitted.

Meanwhile , down in Cork , Customs had become aware of another operation where gardai were running a drugs courier who worked for one of the city's most notorious criminals , Tommy O' Callaghan: their concerns about the activities of Garda informant Edward Keating were raised at the highest level with the Garda but Garda HQ was well aware of what was going on - a garda from Blarney , Jack Doyle, had already raised the matter with senior officers in Dublin , so concerned was he that large amounts of drugs as well as firearms were reaching the streets in an operation which had been designed but had failed to catch Tommy O' Callaghan.

Garda Doyle had secretly recorded tapes of conversations with the informant Eddie Keating , who was the 'transportation manager' for O' Callaghan's drug gang , and handed the tapes over to the senior officers in the hope that they would carry out an internal investigation. Garda Doyle was then 'retired' from the force , on the grounds that he was mentally unfit to carry out his duties : he believes his forced retirement was a means of discrediting his story.......
(MORE LATER).

" In Captain Kelly's book "Orders For The Captain" the action in this case is described (page 12) as "...a continuation of this 'softly softly' approach.." whereas the exact opposite was the intention , the Government's - or at least the Taoiseach's - desire that it should be seen publicly that the 'Twenty Six'-side of the Border could not be used for violent purposes in the Six Counties."

I had asked the Commissioner why had he not reported back and he said that he thought that the initiative for another meeting should lie with the Minister - I was not satisfied with this , as it seemed to me that there was an anxiety on both sides to let the matter die......."
(MORE LATER).

"The continued incarceration of Republican prisoner Brendan Lillis in Maghaberry jail in Co Antrim is just further proof of the bloody-mindedness of the British state to Irish political prisoners.

Brendan has been very ill for some time and is now just five and a half stone in weight. To continue to keep him is jail constitutes cruel and inhuman treatment.

Republican Sinn Fein calls for the immediate release of Brendan Lillis, if for no other reason than on humanitarian grounds. To continue to keep him in jail is nothing other than vindictive".
Josephine Hayden
Republican Sinn Fein POW Department
223 Parnell Street
Dublin 1. 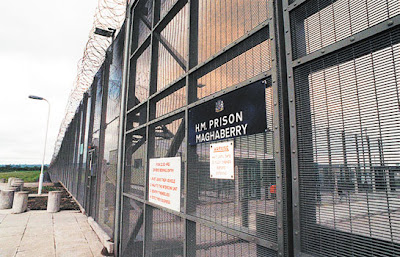 "The situation in Maghaberry jail has worsened over the last several months
while David Ford, British minister of justice in the Stormont regime sat on a report that would solve the impasse in the jail. For eight months this report has been with Ford, and no doubt his bosses the First and Second Ministers Peter Robinson and Martin McGuinness, but he has refused to act on it and tries to justify his inaction by blaming the Republican prisoners.

The full-body humiliating and unnecessary strip search of the POWs is a major stumbling block to bringing about a conclusion to the protest and a major one in the commencement of this action by the POWs. The men were driven to take such drastic measures because they refuse to accept the British Government policy of criminalisation. A policy that was discredited by hundreds of POWs culminating in the deaths of Bobby Sands and his nine comrades in the H-Blocks in 1981.
For the past 13 days, (the ‘dirty’ protest commenced on June 5 last, alarmingly reminiscent of the notorious H-Block conditions) the prisoners have been locked-down 24-hours a day and were refused visits because of their refusal to be classified as criminals, similar to the stand taken by Bobby Sands and his comrades. Relatives are now being victimised and used to add extra pressure on the prisoners, including the ending of all visits until they capitulate on their principled protest.

The POWs are not allowed out of their cells even for a shower or exercise in the yard. They have been living in a ‘tomb’ for two weeks and it looks likely to continue. Everything except their mattress has been removed from the cells. The BOSS chair is a modern device which scans the prisoner’s body for concealed items without the POW having to be forcibly stripped naked and one is in use within the prison already. However in a bazaar twist, prisoners leaving and entering the prison, whether to courts or hospital, are still subjected to this vile naked body search. What is the rationale?
There is a hidden agenda here. Is it policy or disguised sectarianism?

The answer may lie in the mindset of the prison administration, the warders, all the way up to the British Government itself. The day–to-day running of the jail is done almost exclusively by men and women of a loyalist/unionist mindset with the express purpose of making life as difficult as possible for the Republican POWs. The very same mindset pertained at the time of the H-Blocks.

This, the 30th Anniversary of the H-Block Martyrs, is a grave indictment of the British and Stormont authorities that they still continue with the attempted criminalisation of Irish Republican political prisoners." 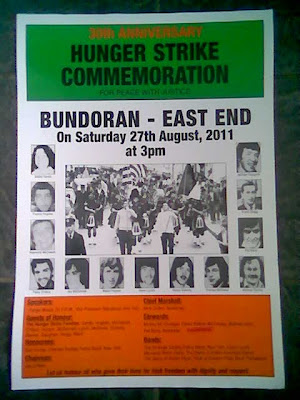