Garda Jack Doyle was taken off all operations after the second delivery , but he maintained contact with Garda informant Edward Keating who , he said later, told him that the drug runs continued. Doyle was concerned , and began making secret recordings of his conversations with the informant.

Keating claimed that between 1995 and 1997 he had brought in 20 consignments of 100 kilos of cannabis , worth a million pounds each , and that nearly all of it made it on to the streets.

He also admitted to storing large quantities of drugs around his home in Blarney , Cork, where he had built a nine-bedroomed bungalow and stables . While there , the drugs were obviously not under the control of the Garda : the concept of a 'controlled delivery' is that the drug are permanently under the surveillance and control of gardai at all times.......
(MORE LATER).

" In a 'Saor Eire' bank robbery in Dublin , Garda Fallon was shot dead : a reward of £5,000 was offered for information leading to arrest and conviction and a list of suspects was published by the Gardai.

On the next day , a Saturday , the Garda Commissioner informed me that Garda Fallon had been one of four brothers who were serving in the Force, that a fifth had failed to get entry as he had not qualified in the Irish test and that their father had now appealed for his admission : the Commissioner and I discussed the merits and were of the opinion that such a gesture, which would require the authority of Government as admission would be outside the normal statutory channels , would be good for the morale of the Force , and for the image of the Government.

I phoned the Minister at his home and got his consent to submit the question to Government with a formal recommendation. The Minister appreciated my arguments that an appointment would be largely valueless unless it were publicised immediately......."
(MORE LATER). 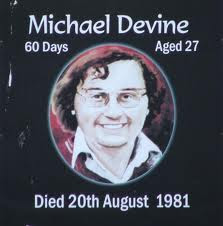 On Saturday 20th August 2011 , Michael Devine and the other twenty-one Irish Republican Hunger-Strikers who died to obtain the yet unobtained goal of a complete British military and political withdrawal from Ireland will be commemorated in both Cork City and Wexford Town : at 1(one)PM at the National Monument in Cork City , at the corner of Grand Parade and South Mall, a wreath-laying ceremony will take place, at which Republican songs will be sung and poetry readings from the Hunger-Strikers will be recited. The event is organised by Republican Sinn Féin and RSF President , Des Dalton , will be the main speaker. ALL WELCOME !

Also on that same day (Saturday 20th August 2011) , at the Republican Garden Of Remembrance ('Old Jail') , Hill Street , Wexford Town , at 3PM , a sponsored 24-hour Fast will commence , with all monies raised being donated to the CABHAIR organisation.
Before the above-mentioned Fast , a picket in support of Republican POW's will be held at the Bullring , from 1.30PM to 2.30PM . The main Republican speaker in Wexford on the day will be Matt Conway, and the event has been organised by Republican Sinn Féin. ALL WELCOME!
Thanks for reading,
Sharon.