Concerned about who he could trust in the garda force , Garda Jack Doyle called in the help of a retired garda , Gerry McCarthy, who brought the rucksack to an inspector in the district. Doyle said he never heard of the guns again and no one was ever charged in connection with the find.

Dissatisfied with the way the Garda was handling the informer Edward Keating , Jack Doyle contacted then 'Sunday Independent' newspaper crime reporter Liz Allen and revealed the existence of the tapes : when it became apparent that he had gone public , he came under increasing pressure to hand the tapes over and eventually did pass them on to the Garda authorities , asking them to investigate the contents.

In November 1998 , he took three weeks sick leave due to stress and, on the night he was due to return to duty he turned up at Togher Garda Barracks , Cork, but was refused entry - he said he was later told by the Garda that he should leave the force on medical grounds or risk being kicked out without a pension. The retirement order , signed by Garda Commissioner Pat Byrne, stated that Jack Doyle was "..mentally infirm , so incapacitated by infirmity of mind that he was unable to perform his duties...." . That "incapacity" was "likely to be permanent" , according to the retirement order........
(MORE LATER).

" I assured the Minister that the Garda Commissioner was mistaken and that there was no prohibition in the Rules governing an award to prevent it being awarded posthumously. Immediately afterwards I sent for the appropriate files , discussed the matter with my senior colleagues and was satisfied that what I had told the Minister was correct.

At 9.30pm the Minister phoned me at my home - his speech was furred but he proceeded to give me instructions to have a memo ready for next morning - he proceeded as if he had never spoken to me on the subject earlier. When I told him that I had looked up the files and that I was absolutely certain that there was no prohibition against a posthumous award he interrupted me angrily and told me to stop talking and to have the memorandum prepared in time for the morning's meeting.

I sat down at 9.50pm to draft the memo which I completed after midnight : meanwhile , I had phoned my private secretary to be in my office at 7.45am to type the memo and also got in touch with the Secretary of the Representative Body for Gardai to ask what would be the reaction of the rank-and-file to the substitution of a 'native' medal for the Scott Medal and when he thought that the reaction would be against , I told him to say no more. I incorporated a reference to the view of the Secretary of the Representative Body in the memo......."
(MORE LATER).

TWO UP-COMING EVENTS TO COMMEMORATE THE 30TH ANNIVERSARY OF THE 1981 HUNGER STRIKES. 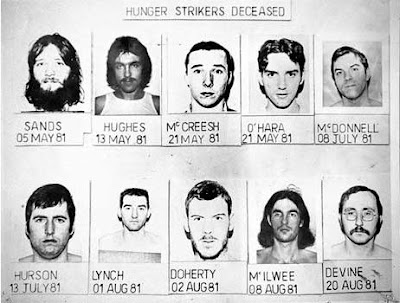 The 'National Graves Association' (Cumann Uaigheann na Laochra Gael) has organised a hunger-striker commemoration to take place in Milltown Cemetery, Belfast, on Sunday 25th September 2011 , at 2pm ,at which the oration will be delivered by former hunger striker Tommy McKearney.

A chartered bus will leave from the Municipal Gallery, Parnell Square, Dublin 1 and a limited number of seats are still available , priced at €25 each. Please note that payment must be received a week in advance of the commemoration : for more details phone 087 2282033.


The legacy of the 1981 H Block Hunger Strikes : to mark the 30th anniversary of the end of the 1981 hunger strikes Republican Sinn Féin are providing a unique opportunity to hear two people who played a central part in the events of 1981 both inside and outside the H Blocks of Long Kesh.
On Saturday October 8, 2011, in Wynn’s Hotel, 35-39 Lower Abbey St, Dublin, Ruarí Ó Brádaigh and Richard O’Rawe will be talking about the events of this momentous and painful year in Irish Revolutionary history. Beginning at 12.30pm the afternoon symposium will also include music, song, poems and writings of the 1981 Hunger Strikes. Posters, leaflets, papers etc of the period will also be on display. Ruairí Ó Brádaigh was President of Sinn Féin at the time of the hunger strikes. He has been one of the leading Irish Republicans in Ireland for almost 60 years and is currently Patron of Republican Sinn Féin. Richard O’Rawe was the PRO of the Republican prisoners in the H Blocks of Long Kesh throughout the hunger strikes. He is the author of 'Blanketmen', an untold story of the H Block hunger strike (2005) and 'Afterlives, The Hunger Strike and the Secret Offer that changed Irish History' (2010). The afternoon of reflection and commemoration will take place from 12.30pm to 5pm.
Thanks,
Sharon. 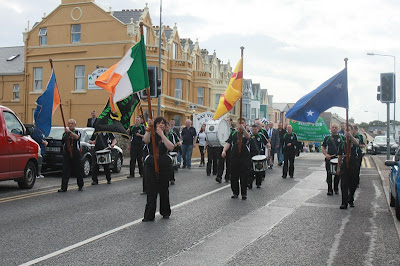 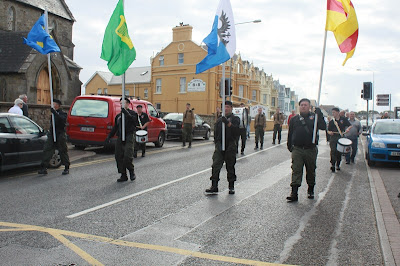 The 30th annual Hunger Strike Commemoration was held in Bundoran , County Donegal , on Saturday last , 27th August 2011. The largest turn-out in recent years joined the Bundoran/Ballyshannon H-Block Committee in remembering the ten men who died on hunger-strike in 1981 and listened intently as Richard Behal read a previously unpublished poem by Bobby Sands.
A full report will be published in the September 2011 issue of 'Saoirse' , which goes to print on Wednesday 7th September 2011 : meanwhile , photographs from this Commemoration can be viewed here.
Thanks ,
Sharon.