'THERE WILL BE ANOTHER DAY'.
By Peadar O'Donnell ; first published in January 1963.

Shortly before he died , Colonel Maurice Moore asked my wife to promise him that she would keep at me until I wrote an account of the land annuity agitation in which he and I - and for that matter, she - played active roles. She took her promise seriously - "One dare not fail so good a man" , she said , and put me under geasa not to fail him.

I promised her , and told myself, I would chase along country roads for a few weeks and gather the story , life-living, from the lips of those who lived it. Every now and then I made a false start, and wrote bits of notes in this townland and that , which I proposed to fit into a framework of time later , by checking them against the files of 'An Phoblacht'. I had no sense of urgency about the work until Phil McCauley , secretary to the most important of all the committees, died suddenly.

Looking around me then , I was startled at how many of those from whom I was to gather the story had died , and with some regret for my delay I set about writing, at least enough of an outline to meet the obligation laid on me.......
(MORE LATER).

" When reading in 'The Irish Times' an account of the dismissal of the two Ministers I came across references to Mr. O Morain which seemed to me to misrepresent his attitude and, at lunch time , I went to see him in Mount Carmel Hospital . I showed the offending statement to him and offered to draft a correction which I would bring to the notice of the Taoiseach before a Fianna Fail Parliamentary Party meeting which was scheduled for 6.00 pm : I felt that a misrepresentation of Mr. O Morain's attitude would not be helpful to the Taoiseach and I had always understood from Mr. O Morain's manner and speech that he held the Taoiseach in the highest respect. Mr. O Morain declined."

MAY 7 , 1970 :
" The President appointed Mr Des O Malley , on the nomination of the Taoiseach , to be Minister for Justice. Earlier , I had said to the Taoiseach that I had had a dreadful time since 1965 as principal adviser to the Minister , under the Minister and Secretary's Act , and he said that he was well aware that I had been working under difficulties : " - " I will give you a good one this time."

" Although Mr. O Malley took office formally as Minister for Justice on this date he moved in on 6th May , the day that he was nominated in the Dail. He made an immediate impact as full of energy , boyishness and humour. Before this he had been Parliamentary Secretary to the Taoiseach since the General Election in 1969 so that he was a comparative newcomer to the political scene with no experience in administration of a public Department. I enquired and was told by his office staff that '...he was one of the best but shockingly impulsive and would need to be advised to think again.......' " .
(MORE LATER). 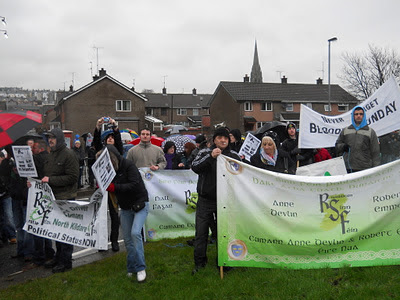 "I went with Anger at my heel
Through Bogside of the bitter zeal
- Jesus pity! - on a day
Of cold and drizzle and decay.
A month had passed. Yet there remained
A murder smell that stung and stained.
On flats and alleys-over all-
It hung; on battered roof and wall,
On wreck and rubbish scattered thick,
On sullen steps and pitted brick.
And when I came where thirteen died
It shrivelled up my heart. I sighed...."
(By Thomas Kinsella , from here.)

More pics from the 40th Anniversary of 'Bloody Sunday' in Derry can be viewed here.


FINE GAEL HYPOCRISY - JUST THE SAME AS ANY OTHER LEINSTER HOUSE-PARTY HYPOCRISY.... 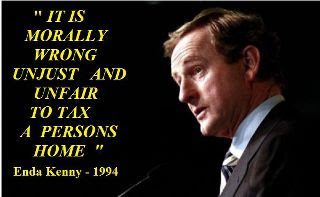 "(It is) morally unjust and unfair to tax a persons home and by so doing grind him into the ground. It reminds me of a vampire tax, in that it drives a stake through the heart of home ownership, through enthusiasm and initiative, and sucks the the life blood of the people who want to own their own home and better their position....(Fine Gael)...will be opposing it by every means possible...."

- Enda Kenny , Fine Gael , when he was the leader of the then main 'Opposition' party in Leinster House (from here) . 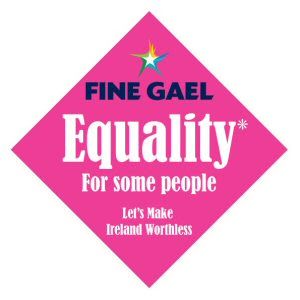 "However, given the large majority of the Government we know it can railroad through any legislation. If residential property tax, or family home tax as I prefer to call it, is amalgamated with service charges it will crucify hundreds of thousands of people and develop into a super-tax which will be fought tooth and nail. The odium which the poll tax in Britain, under the redoubtable Mrs. Thatcher, caused a number of years ago will pale into insignificance when our electorate deal with this Government's outrageous intention to introduce such a tax....."

- anti-home-tax hero Enda Kenny , again - and again , he was in supposed 'Opposition' to the then Leinster House Fianna Fail-led 'government'. And it worked , as expected : enough politically-stupid voters took the man at his word and voted for him and his Fine Gael party last February to put them in power resulting in this u-turn , amongst others.

As was the case in previous Free State elections , Irish Republicans saw it coming and tried to ensure that those intending to vote would do so wisely - by not voting for any of them , as none of them can be trusted. And whilst we got our message out to thousands of people , it wasn't a fully successful campaign and Fine Gael and Labour took over from Fianna Fail and the Greens , resulting in a different shade of u-turn , hypocrisy and broken 'promise'. The fact is that the IMF and a bank in Brussels are in charge of this State and regardless of which type of 'home grown' political gangster took Office in February 2011 and , indeed, regardless of which of those political criminals takes Office at the next State-wide election , they, too, will do as their told by their boss in Washington or Brussels. The best you can do , as a voter, is to vote against them all by voting N.O.T.A. You owe it to yourself and your children to do so.....

Statements from Republican Sinn Féin can be read here... ..can be viewed here!


As an Irish Republican organisation , Republican Sinn Féin is largely censored by the State media and by the State-friendly so-called 'Independent' media operatives and, as such - as well as publishing its own monthly newspaper and a 'Mailing List' - the organisation will use any avenue available to it to promote the Irish Republican message. If you want to be kept up-to-date on that message , then 'Bookmark' the above links and perhaps take out a subscription to the monthly newspaper.
Thanks for reading,
Sharon.