The land annuity agitation was pushed forward, initially , by weak forces. It developed in the shelter of the unrest created by the growing strength and aggression of the IRA , in a period of widespread , economic crisis - between 1926 and 1932 - only that the IRA was abroad the townlands involved in the agitation would have been overrun.

I think it unlikely that the land annuity agitation would have forced itself onto the political scene , as a dominant , national issue , so soon, only that I was among the weapons to its hand , at an early stage, and that I , in turn, had to hand 'An Phoblacht' , the weekly journal of the IRA , which I edited. ('1169...' Comment : that paper , 'An Phoblacht' , is now the journal of constitutional nationalism and supports the views expressed by constitutional nationalists in both Leinster House and Stormont.)

My role was a simple one : I faced a few townlands with a view of a state of things which they recognised to be authentic , and their response to it was courageous, but they were influenced by what they saw and not by me directly, for I was never popular among them , in the mass sense.......
(MORE LATER).

" Very early on , Mr O' Malley made it clear to me that he expected that all communication between the Taoiseach and me would be through him and that was entirely in accordance with my personal wishes. In my own case I had never spoken on official matters to Mr. Lemass or Mr. de Valera except in the presence and with the permission of my Minister of the day but Mr. Lynch had a style of his own which permitted of direct access to civil servants when it suited him and a quick drawing down of the shutters if an objective assessment were proferred which did not fall in line with his line of thought.

On this date I sought the formal approval of the Minister for two postal warrants (authorisation for phone-tapping) which I had signed under the Seal of Office of the Minister for Justice in the interregnum between Mr. O Morain's departure and his appointment.

Under the Ministers and Secretaries Act 1924, the Secretary of a Department of State was empowered to sign under Seal. In actual fact, those were the only postal warrants signed by me during ten years as Secretary. The practice varied before my time - some Ministers , notably Mr. Gerry Boland and Mr. Everett, took the view that it would be preferable that warrants should be signed Departmentally in order that the Minister could, in truth , disclaim knowledge of warrants issued for the control of organised crime of a serious nature or for the supervision of subversive activities which were only issued on the written demand of the Commissioner, Garda Siochana or the Minister for Defence for the purposes of military intelligence......."
(MORE LATER).

BLEEDING THE TAXPAYER - A TALE OF TWO PRO-BRITISH , ANTI-REPUBLICAN 'PARLIAMENTS' :

Besides being pro-British and anti-Republican , the lodgers in the above-pictured 'political assemblies' share one other trait in common : their desire to enrich themselves with as much cash as quickly as possible. The representatives in the first assembly , Leinster House, have recently billed the State taxpayer for €6 million in expenses for less than one years 'work' (full 'spreadsheet' break-down can be viewed here ) whilst their counterparts in Stormont have taken £5 million from the taxpayer and used it to pay for 'Spin Doctors'!

One (Fine Gael) representative in Leinster House, whilst canvassing for votes this time last year , stated loud and repeatedly that , if elected, he would not take the €90,000-plus salary and would instead only accept half of it and return the other half to State coffers : he got elected and promptly let it be known that he was doing the job for approximately €45,000 a year and called on other Leinster House members to do likewise - a call that fell on deaf ears. And perhaps it was one of those 'deaf-eared' members that tipped-off the media that the same 'half-rate' representative had placed his wife and two of his cousins in his Office as full-time staff members , paid for by the taxpayer.....

The only sure way to stop these political gangsters from ripping-off the taxpayer is to vote N.O.T.A. - and encourage as many others as you can to do likewise. They are all living beyond our means.

'LOVE ULSTER' LOYALISTS TO CAUSE RIOTS IN DUBLIN AGAIN AT EASTER 2012 ?

A number of readers of this blog , who live in various parts of the Occupied Six Counties, have been in touch with us in recent days to voice concerns about strong rumours that are circulating in their areas in connection with Willie Frazer's 'FAIR' group and their colleagues in the Nazi-supporting 'Combat 18' gang. Apparently , members and/or supporters of both outfits are actively canvassing support for a loyalist parade to take place through Dublin city centre on Easter weekend 2012 , in what is allegedly being touted by them as 'a return match' , a reference to the riots they caused in Dublin in 2006. We covered the trouble they caused at that time on this blog and, whilst we hope there is no foundation to the rumours , we would not be surprised to again witness the clueless politicians in Leinster House welcoming same and instructing their police force to remove protestors from the intended parade route. Republican Sinn Féin were out in 2006 on the streets , in protest, and we have no doubt that, should Mr Frazer and his right-wing thugs attempt to parade their neo-Nazi attitudes in Dublin , they will again be met by Irish Republican objectors. When/if we receive verification that these pro-British loyalists are indeed planning to cause more riots in Dublin , we will post about it here. 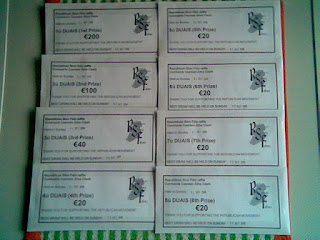 ...this coming Sunday (12th February 2012) will see myself and five others taking shelter (!) in a hotel on the Dublin-Kildare border for the usual monthly raffle : and shelter we will surely need because, unless we get back a few dozen unsold tickets (highly unlikely!) we will be going into the lions den with only twenty-five 'peace offerings' , having already sold fifty of our 'on-the-day-offerings' (ie tickets for that day's raffle) the last time we were there ! So , at this particular moment in time, we are not concerned AT ALL at facing-down Mr Frazer and his 'C18' thugs......!
Thanks for reading,
Sharon.