For a little while on the morning of the attack on IRA Headquarters , Four Courts , Dublin , 28th June 1922 , Liam Mellows and I shared vigil at one of the barricaded upper windows , and watched the city bestir itself , within our arc of vision, to the noise of rifle fire and light artillery fire. We thought our thoughts. Two men , obviously workmen making their way along the quays to their jobs, started us speculating on what role the trade unions would have been guided into were James Connolly alive and the Republic under attack.

It was the first time I heard Mellows on the play of social forces in the crisis of the Treaty ; I was present at the Dáil Éireann session when he made his speech against the Treaty but , while what he said then impressed me greatly , it gave no indication of the pattern of ideas he uncovered now.

The Four Courts fell and its garrison became prisoners , and with it members of the IRA Executive - Rory O' Connor , Liam Mellows , Joe McKelvey and Peadar O' Donnell. In the angry mood of the thronged cells in Mountjoy Jail , the prisoners instinctively turned to Mellows as the one among us who must, somehow , be able to explain how the Republican Army could permit itself to be overrun by much weaker military forces and why certain men of courage , hitherto devoted to independence , should choose to enter on a road of struggle to overthrow the Republic and raise on its ruins a parliament which rested on the penal British Government of Ireland Act 1920.......
(MORE LATER).

" In the Dail debate on May 8th and 9th , the Taoiseach gave an unqualified assurance that no postal warrant in respect of the telephone or correspondence of any member of government or, indeed , for any member of the Dail or Seanad had been signed by the Minister for Justice. The Taoiseach was right , of course, in what he said but it would not have been so if I had had my way. I saw no reason, then or at any other time, why there should be exceptions from the processes of criminal investigation."

MAY 8TH AND 9TH 1970 :
" The marathon two-day Dail debate on the circumstances of the dismissal of Ministers made unpleasant reading for me as I was mentioned by name and activities were ascribed to me which were without foundation. It was stated that I was working on a 'letter de cachet' basis to the Taoiseach : Deputy Kevin Boland's phraseology (Volume 246 , Number 7 , Cols. 744-48) and that I was employing a 'super-Special Branch' for surveillance of Ministers. It was complete nonsense. I was obliged to report direct to the Taoiseach in pursuance of directions from my Minister , Mr. O' Morain, who was to say so in Court in September 1970 and to say so with greater emphasis in his correspondence with and in his testimony before the Committee of Public Accounts - see Mr. O' Morain's letter dated 10th June 1961 on page 304 of CPA Report : "Any knowledge that I had of these events was fully reported both by me and , on my express instructions, by Mr Peter Berry ....to the Taoiseach at all material times....."
(MORE LATER).

I had the pleasure of meeting Brian Mór a number of times over the years , and each time we parted company we both knew it was only temporary due to the fact that we shared the same Irish Republican values and realised that , as comrades, we were destined to meet again : and we are , but, now , it won't be in this life. 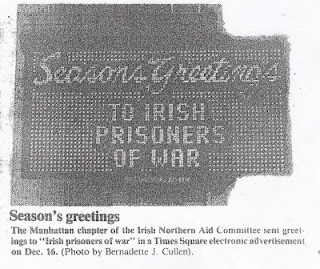 'In June of last year he wrote an open letter to the Lord Mayor of Belfast to protest at one of his poster artworks, commemorating Theobald Wolfe Tone and the 1798 Rising, being hung in Belfast City hall. Brian saw this as merely an attempt to distract from the fact that Belfast and the rest of the Six Counties were still occupied by British forces. In his own inimitable style Brian finished his letter by declaring: "When the Belfast City Hall is located in a united Ireland, not the United Kingdom, I would be honored to see my artwork displayed. Until then, I request that it be taken down. Moving the picture of the Queen of England from one wall to another does not in any way make Belfast part of a United Ireland. I object to my artwork being used to pretend otherwise...." '
(More acknowledgments and tributes here and here.)

There is a lot more I could say about Brian , but this is not the most suitable venue in which to do so : I will close , for now , with the words of Oscar Wilde - "Friendship is far more tragic than love. It lasts longer."
Slán anois , A Chara. 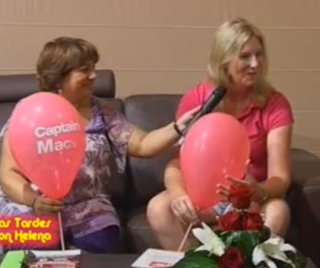 Beverley Cooper-Flynn , daughter of 'P' Flynn (from the 'ThreeHouse-Flynn' Clan) might very well have had her glittering political career whipped away from her by cruel circumstances (!) but at least she won't go hungry : she owns a chipper in Marbella , which enables her to top-up her tan whilst checking the accounts of her customers , some of whom may not realise that , on 'leaving' Leinster House , she received a few bob to help her on her way : a lump-sum payment of €186,000 , hardly enough, these days, to put fish and chips on the table. But not to worry : 'Class Act' Bev also receives a weekly State pension , courtesy of her services to those that had elected her to Leinster House, of €697 a week , every week , for the rest of her life. And no better girl to tell ya if it's index-linked or not.....
So - when you are next in Marbella on holiday (!) , you know where not to go if you're hungry , and where to go if you're angry.....
Thanks for reading,
Sharon.