'THERE WILL BE ANOTHER DAY.....'
By Peadar O'Donnell ; first published in January 1963.
Eamon de Valera was the standard-bearer for the young people in the struggle for the Republic : he was the great heroic figure of the period and , by lucky chance, ('1169...' Comment - or something else? ) on his arrest he was not put in immediately with the other leaders , and so was not caught up in the first , hurried, executions. The fact of his American birth had time to be noticed. Protest voices against executions arose , and so leadership was thrust on him by the British firing parties that shot down the other chiefs of the Rising from around him . The difference between de Valera and Arthur Griffith was sharper than either of them realised : Griffith , the 'Home Ruler' , was concerned with the powers an Irish Parliament could win for itself from the British Government whilst de Valera , a Republican - not doctrinaire , but a Republican - ('1169...' Comment : at that point and, based on later occurrences, allegedly so....) concerned himself with what concessions the Irish Republic could make to Britain , consistent with sovereignty , on certain aspects of defence and foreign relations. This difference was to explode , and startle both of them by it's shattering power , in the conflict of the Treaty versus 'Document No. 2'...... (MORE LATER).
-------------------------------------------- --------------------------------------------

THE PETER BERRY PAPERS....... The Top Secret Memoirs of Ireland's Most Powerful Civil Servant : Dirty Tricks, Election '69/ Spying on a Unionist Politician/ Keeping the (State) Taoiseach informed/ The Garda Fallon Murder/ Advice to Jack Lynch- 'Fire the pair of them...'/ Vivion De Valera's advice to O'Malley/ Rumours of a Coup D'Etat/ The Internment Plot, November 1970/ Secret Meeting with William Craig.
From 'MAGILL' magazine , June 1980.
" There was a sad drop in discipline and moral standards of Ministers ('1169...' Comment : the one thing they are consistent with...) since the mid-1960's : to quote one of them in a speech in Galway - Mr George Colley stated 'there were low standards in high places..' . Nobody had to guess at the time as to whom he was aiming at. Copies of Tony Fagan's statement were sent by the Minister to the Minister for Finance and , subsequently, we discussed it, in all its implications, and he asked me to find out what was Murray's attitude to the revelations - I assumed that he wanted to know for Mr Colley. I said that I would find out." MAY 19th , 1970 : " I phoned Murray , the Secretary of the Department of Finance : our conversation , which was a fairly lengthy one, was recorded at my end and immediately afterwards the recording was transcribed by my private secretary who signed and dated her work. A carbon copy was given to the Minister (who wanted it) and the original and the dictaphone belt were placed in a pocket in the left hand side of the 'Arms Conspiracy' file. This recording was explanatory of my attitude and his - he admitted that he had been uneasy about the way that the grant-in-aid for 'Northern Ireland Relief' was being disposed of and went on to say that if he had raised a rucus he would have been thrown out of the room by the Minister ; 'You know what the bloody man is like...' , or words near that. I interjected that on an occasion the same Minister had literally thrown a file at me and that I had walked out of his room , leaving the papers on the floor...." (MORE LATER).
------------------------------------ ------------------------------------ COMMANDANT-GENERAL TOM MAGUIRE BORN ON THIS DATE (28th MARCH) 120 YEARS AGO.... 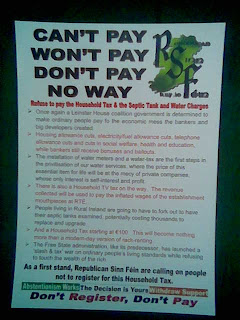 The front of the RSF anti-household tax leaflet......
On Saturday , 31st March 2012 , anti-household tax campaigners will assemble at the Garden of Remembrance in Parnell Square , Dublin from where , at 1pm, they will march to the Convention Centre on Spencer Dock/North Wall Quay , where the Fine Gael/Household Tax Party will be holding its Ard Fheis. Republican Sinn Féin members will be taking part in this protest , and hope to have a presence that same day in Clondalkin , Dublin, at 11am , outside the County Council Offices (facing the Mill Shopping Centre) where a smaller , but equally loud and justified protest re this unjust tax will be held. Thousands of the RSF leaflet pictured here have already been distributed and this work will be intensified in the coming days. 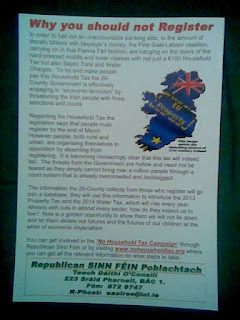 ......on Thursday 31st May 2012 , voters in this State will be asked to vote on whether the IMF and politicians and bankers in Brussels should be given permission to insert an 11-page Rulebook into the Constitution of this State , the wording of which has been dictated by them. The purpose of this proposed insertion will , in effect , make it 'illegal' for people in this State - working or unemployed - not to abide by political decisions made by the authors mentioned : RSF are calling for a 'No' vote in relation to this issue , and will be actively campaigning for same. These are the same groups that have , for starters, cut your wages or dole money ,want to tax your house and introduce a water tax - now they want to , as stated , make it illegal for you to refuse to pay for the greed inflicted on society by corrupt politicians , crooked bankers and morally bent property speculators. PAYBACK'S A BITCH : on Thursday 31st May 2012 , tell them 'No' - VOTE NO!
---------------- ---------------- Thanks for reading,
Sharon.
(Apologises if this post appears disjointed - we are working off a new platform and , for now , it's on a 'trial and error' basis)