Arthur Griffith wrote of James Fintan Lalor that he was a land reformer who tried to throw the agrarian struggle across the nation's road to freedom. He was equally hard-faced towards Jim Larkin in the period of the great labour struggle in Dublin and this , perhaps, explains his tentative relation with an armed uprising in which James Connolly played so dominant a role , for he was a courageous man within the range of his convictions.

He was a 'Home Ruler' with a sturdier sense of struggle than John Redmond , but the latter had the ear of the people , the control of a powerful party machine and the support of the clergy. In part , Griffith's policy was that the members elected for Irish constituencies should boycott Westminster and take their place in an Irish Parliament to which the people would give allegiance. But he could not make himself heard.

The 1916 Rising , however , changed the Irish political scene utterly : young men shouldered their way forward shouting new slogans and , after a short tussle, they pushed John Redmond's party aside and elected a majority of members pledged to constitute themselves 'Dáil Éireann' , the sovereign assembly of the Irish people assembled on the high ground of the Republic . Arthur Griffith had contemplated no such goal - his aim was 'Home Rule' for a democratic Ireland within the 'British Empire' and he now had to decide whether to take his stand with the people - without belief in their vision - or stay behind without hope to realise his own vision.......
(MORE LATER).

" I learnt that Captain Kelly had made a statement of his part to a friend , Mike Burns of RTE , who was described as a friend of the Taoiseach - I informed the Taoiseach who remarked 'Have I any friends left?' The pathos of this remark was such that I repeated it at a conference with the Minister and the Attorney General on May 20th , and I could see that the Minister was not pleased with my intimacy with the Taoiseach.

This was a curious phenomenon which I was to observe again and again in the following months - the desire of the 'Centurion Imperial Caesar's Bodyguard' , in the persons of a caucus in the Cabinet , to keep access to the Taoiseach within a chosen circle and resentment against anyone who breached it. It was very necessary , of course, in order that a prepared story should stand up , that persons with a knowledge of contradictions should be isolated and, as far as possible , kept in ignorance of the developing theme.

The necessity to keep the Fianna Fail government in power at all costs was the over-riding consideration and I had shown an independence of thought in recent years which , while not making me suspect of anti-Fianna Fail leanings , did not make for certainty that I would go with them all the way. What was happening in the Lynch regime would have been unthinkable under Mr Lemass or Mr de Valera . The naked face of self-interest in Ministerial circles was on exhibition without any attempts at concealment from the serving civil servants......."
(MORE LATER). 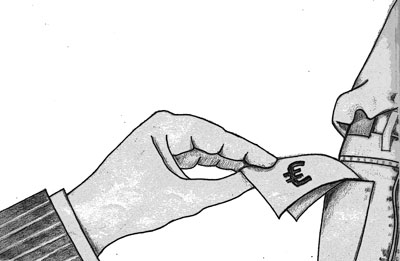 .....the Fine Gael/Labour coalition administration in this State seem to have realised ,at this late stage, that it will not be physically possible to bring to court and/or imprison all those who refuse to pay their new household tax - so a 'Plan B' has been put together : to stop whatever money is 'owed' from your social welfare payments , your pay packet or your bank account. And you can see from that same statement by State Minister Philip Hogan (Fine Gael) that this Leinster House administration are "....determined to make sure that everybody pays...." - well, not quite "everybody" : State Ministers will , by their own decree ,be excused from having to pay - "....the exemptions from payment of the household charge (include)........residential property owned by a Minister of the Government....."

There are a number of ways by which you can let these political parasites know that you object to paying new taxes in order to bail them and their banker buddies out of the hole they have placed all of us in this State in but , of course , the best way is by not registering for the new tax and by not paying it. You can also voice your objection in an on-line poll , organised by the 'Anglo : Not our Debt Campaign' group , attend the Thursday 22nd March 'Here Come The Girls' above-mentioned/linked protest in O'Connell Street at 7pm , attend the State-wide Rally in the National Stadium on the South Circular Road in Dublin on Saturday 24th March and/or take part in the 'Household Tax' picket that will be placed on the Fine Gael Ard Fheis on Saturday 31st March 2012 - those attending this picket will assemble at 1pm at the Garden of Remembrance in Parnell Square and will march from there to the Fine Gael Ard Fheis venue , the Convention Centre on Spencer Dock , Dublin 1 : whatever you do , don't just 'do nothing' - if not for your own sake , then do it for your kids and their kids because , such is the large scale nature of the financial injury done to this State by those that are in the 'elite' in this State , it's the only way to stop the forced emigration of those you love.....
Thanks for reading,
Sharon.