'THERE WILL BE ANOTHER DAY.....' By Peadar O'Donnell ; first published in January 1963.
There was nothing make-believe , however, about the loyalists' opposition to Sinn Féin * - if union officials took that side their Protestant members , almost to a man, would stampede into a sectarian trade union in the shelter of the Orange lodges. Followers of John Redmond would not bolt - they would sulk , and many would lapse. On the other hand , a decision by trade union officials to put forward Labour candidates who would take their seats in the British Parliament would have caused an uproar. In these circumstances , de Valera's brusque 'Labour must wait' must have sounded like the answer to a prayer - but can anyone see de Valera daring the like were James Connolly alive ? There were men among the trade union officials who saw clearly that to stand aside in the General Election of 1918 was to deny James Connolly : the man among this group who could best communicate Connolly to Irish workers and who , indeed, had Connolly's mandate to go on from where he had been forced to leave off , was William O' Brien , General Secretary of the Irish Transport and General Workers Union but O' Brien, too , hesitated to take Connolly's place at the rostrum. Could it be that even he was influenced by the danger of confusion in the Hibernian-infested new branches of his union in provincial towns ? It could be , it could well be ; it could be , too , that O' Brien considered he could influence the leaders of the independence struggle through his friendly , personal association with them - that he confused the prompter's stool with a place on the stage**........ (* That was then , but not so today : (Provisional) Sinn Féin and the loyalists are working hand-in-hand , under a writ from Westminster, to 'govern' the Six-County area for Britain.) (** - What an apt description for Provisional Sinn Féin today : on the prompter's stool (ie Stormont) but believing themselves to be 'players' on the Main Stage !) (MORE LATER).

THE PETER BERRY PAPERS....... The Top Secret Memoirs of Ireland's Most Powerful Civil Servant : Dirty Tricks, Election '69/ Spying on a Unionist Politician/ Keeping the (State) Taoiseach informed/ The Garda Fallon Murder/ Advice to Jack Lynch- 'Fire the pair of them...'/ Vivion De Valera's advice to O'Malley/ Rumours of a Coup D'Etat/ The Internment Plot, November 1970/ Secret Meeting with William Craig. From 'MAGILL' magazine , June 1980. " Later , I had a phone call from the Group Law Agent , Rory O' Connor , who suggested that it would be as well to take down what he was about to say so that there would be no error or misinterpretation , and added - 'You may need to read between the lines...' . I said for him to go ahead and after a moment or so I said that he could speak faster. He remarked that I must have very good shorthand and I told him that he was being recorded on tape to which he said , laughingly, that he had no idea that Government Departments were so up to date in method. The general effect of his message was that while the bank could not accept that they had an obligation they would be looking into the matter on their own account and , reading between the lines , I was happy , and reported back to the Minister. Curiously enough , I do not recollect reading a transcript of the recording but this is understandable as I went home early as I was not feeling well. Some days later I heard from the Special Branch that the account in Baggot Street was being examined. When I came back before the Committee of Public Accounts on 12th March 1971 for "consulation" , I did not tell the Committee of my failure to get Murray to intervene and of my own intervention with the AIB authorities to freeze the account - it just did not jump to my recollection and , at the time , I did not attach any particular significance to it . But , much later - in 1975 - when I was reading in Booklet Number 4 the evidence given by Mr Deacon , the Manager of the bank in Baggot Street to the CPA on January 20th , 1971 , I realised that my intervention did have significance and that if I had communicated the facts to the CPA I would have assisted them in their investigations....." (MORE LATER). 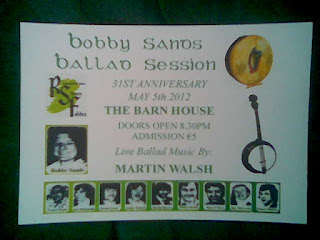 On Saturday , 5th May 2012 - the 31st Anniversary of the death of Bobby Sands , one of the twenty-two Irish Republicans who died on hunger-strike between 1917 and 1981 - Irish Republicans will be holding a ballad session in 'The Barn House' pub , Dolphin's Barn , Dublin 8. Admission is only a fiver per person , doors open at 8.30pm , a Republican raffle will be held on the night and Martin Walsh will take to the stage at about 9pm : those intending to attend this function would be advised to get there early , as locals will be vying for space with a crowd from the Bobby Sands Commemoration , which is being held that same day in Dublin City Centre. The entrance tickets alone (see above pic) , which will be available at the door on the night , are worth the price of admission on their own as they are set to become a collector's item.
Thanks for reading,
Sharon.