'THERE WILL BE ANOTHER DAY.....' By Peadar O'Donnell ; first published in January 1963. De Valera was not a Republican in Wolfe Tone's sense - he had none of Tone's scorn of the superstition of royalty and was incapable of seeing the independence struggle as Tone saw it , or James Connolly. He was numb , rather than hostile, to the working-class struggle and was as scared as Arthur Griffith of the gospel of Fintan Lalor. It was inevitable that he and Griffith should come together. The country saw high drama in the incident at a Republican delegate meeting in the Mansion House in Dublin when Father O' Flanagan , reporting on a backstage conference with Arthur Griffith , announced that "Griffith has thrown his lot in with us..." - the delegates got to their feet and cheered , but nobody noticed that Connolly's chair was left vacant : that the place Connolly purchased for the organised Labour movement in the leadership of the independence struggle was being denied ; or reneged. It was made easy for de Valera to call Griffith in and shut Labour out , for the Irish Labour Party did not want a share in the leadership. James Connolly's work , teaching , martyrdom , left no imprint on the policy of Irish working-class movements. Dublin workers uncovered at every mention of his name at a meeting , but nobody preached Connolly to them and , during his short days among them , he spoke to them from a very great height. He was a Marxian Socialist who , as a fighter for Irish Freedom , was dedicated to the proposition that the working-class alone is capable of leading the nation to victory. Any leadership not responsive to working-class needs must make peace short of independence and , in the light of this proposition , he explained the collapse of Daniel O' Connell , the hesitations of the Young Irelanders , the failure* of the Fenians , the Tragedy of Parnell : for that matter he foretold the Treaty....... (* '1169...' Comment : to say that the Fenians "failed" is not the truth - their actions ensured that the desire - the 'flame' - for Irish freedom was kept alive for the next generation.) (MORE LATER).
------------------------------------------- 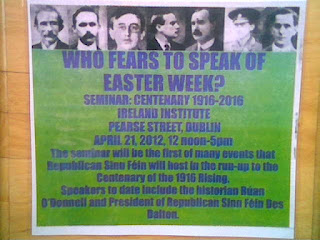 A Seminar entitled 'Who Fears To Speak Of Easter Week' , which has been organised by Republican Sinn Féin , will be held in Dublin on Saturday 21st April 2012 , in 'The Ireland Institute' (formally known as the 'Pearse Institute') from 12 Noon to 5pm : there is no entry charge and those interested in attending can stay for the whole seminar or part thereof. The main speakers are Ruán O' Donnell , Des Dalton and Ruairí Óg Ó Brádaigh , and songs , poems and readings connected to the 1916 Rising will feature throughout the event. The Clár ('Programme') for the Seminar is as follows : 12 Noon - reading of the 1916 Proclamation. 12.05 to 1pm - music and songs of the 1916 Rising. 1pm to 1.30pm - break for lunch. 1.30pm - excerpt from Thomas J Clarke's 'Glimpses of an Irish Felon's Prison Life'. 2pm - Ruán O'Donnell. 2.30pm - Des Dalton , Uachtarán , Sinn Féin Poblachtach. 3pm - Ruairí Óg Ó Brádaigh (a 'Q&A' session will be held after each speaker). 3.30pm - Pádraig Pearse's address at the grave of O'Donovan Rossa. 3.45pm - Thomas MacDonagh's address to his court-martial. 4pm - excerpt from Éamonn Ceannt's court-martial address. 4.10pm - a reading from 'James Connolly'. 4.15pm - 'The Rebel' (Pádraig Pearse). 4.25pm - 'Easter 1916' (WB Yeats). 4.35pm - 'The Rose Tree' (WB Yeats). 'This Heritage To The Race Of Kings' (Joseph Plunkett). 'A Lament For Thomas MacDonagh' (Francis Ledwidge). 'The Ghost of Roger Casement' (WB Yeats). 5pm - CLOSE. The 'Ireland Institute' is located at No. 27 Pearse Street , Dublin 2 - a few doors away from the Trinity Capital Hotel - and, as stated , there is no cover charge for entry to the Seminar , nor is there a requirement that you stay for the full five hours. Hope to see you there ! Thanks for reading , Sharon.