While the British Government had an easy way of overcoming default , the individual landlord had either to invoke the courts or go without his rent : in the half light of the independence movement - 1918 to early 1919 - the landlord's agent could still use the British court and get a decree , and the bailiff , if he was tricky , plucky and lucky, could find a way to collect on it. But this was a dangerous flash-point of country unrest , for let any populous countryside once clash with the bailiff on this issue and Dublin might bawl its head off in vain. And this happened and it happened in Donegal , where a bailiff seized a few head of cattle for arrears of rent due to the estate of the Marquess of Conyngham and young men cutting turf saw him and set themselves across his path. The bailiff stood his ground and people gathered - but the bailiff had a case to make : Sinn Féin had no policy against rent so what harm if his decree came from a British court , or would it in fact be alright if he got one from Sinn Fein - would they let him pass then ? They would not and here was their judgement - from that day onwards the bailiff's office was abolished. Let him go home and live off his bit of land like his neighbours. On the following Sunday this matter was raised at a meeting in the village hall and 'wild ideas' were expounded - the landlord was a scarecrow of the past and landlordism was a wornout historical myth which was binding nowhere , and least of all in Ireland. The land annuity was only the other side of that rent penny and people should disown that too. Henceforth let no man pay rent for land and the people raised their hands and pledged themselves to practice and protect this freedom. Joe Sweeney , the local IRA Commandant and one of the St Enda pupils in the Rising , was friendly to their decision and sheltered it.......
(MORE LATER).

THE PETER BERRY PAPERS....... The Top Secret Memoirs of Ireland's Most Powerful Civil Servant : Dirty Tricks, Election '69/ Spying on a Unionist Politician/ Keeping the (State) Taoiseach informed/ The Garda Fallon Murder/ Advice to Jack Lynch- 'Fire the pair of them...'/ Vivion De Valera's advice to O'Malley/ Rumours of a Coup D'Etat/ The Internment Plot, November 1970/ Secret Meeting with William Craig. From 'MAGILL' magazine , June 1980.
" Part Two dealt with events from August 1969 to the period preceeding 18th April and Part Three dealt with the period 18th April to 22nd April , and included an account of my conversation with Chief Supt. Malone (immediately after my talk with Mr Haughey) in which he told me that Mr. Haughey's personal assistant , Tony Fagan , had been on the phone requesting that Chief Supt. Fleming should phone Mr. Haughey and it recapitulated what I had told him ie that Mr. Haughey had been on the phone to me asking that the cargo should be let go through Dublin Airport to the North , and it also mentioned my instructions that Chief Supt. Fleming should not talk to Mr. Haughey or Mr. Fagan. Part Three also mentioned that I had been in a dilemma as to whether the Taoiseach could possibly be speaking with two voices , his public statements as to the Government's peaceful intentions towards the North contrasted with the repeated actions of some of his principal Ministers in trying to bring in arms and his own failure to take any more than token action when informed in October 1969 by me of Capt. Kelly's activities with the IRA - the Baileboro meeting , etc - and it also mentioned my decision to consult the President as to the proper course of action for me to take when I became possessed of information of national concern. Part Four dealt with the history of Albert Luykx and how he came to be given a 'certificate of character' by me on the instructions of Mr. O Morain at the request of Mr. Blaney : this was to be the item on which the first trial was brought to an abortive conclusion on September 29th when Mr. Albert Woods , Counsel for a defendant , criticised in very strong language the Judge's conduct of the proceedings. The incident , also, had a catastrophic effect on proceedings which I was about to take in the civil courts for defamation of character by 'The Irish Times' and 'The Irish Press' on September 15th....."
(MORE LATER).
MARTIN McGUINNESS...... 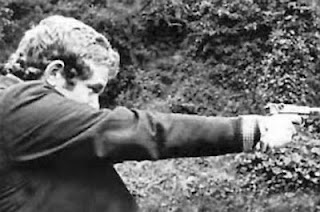 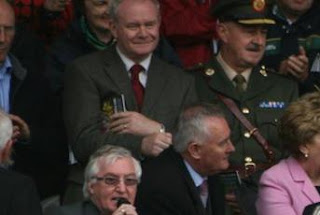 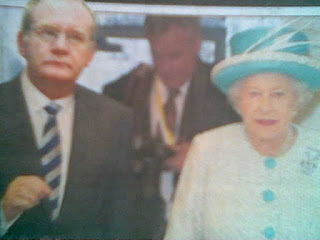 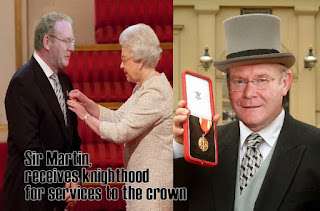 .....OTHER SIDE.
From this to this : "Unfortunately, tiny and unrepresentative groups are still out there, which believe that it is a good idea to try to destabilise not just the peace process but these institutions. What they to come to terms with is that there is no prospect of destabilising the peace process, and there is no prospect whatsoever of breaking up the unity of these institutions. Some considerable time ago, the First Minister and I committed ourselves to the principle that, no matter what happens, we are going to remain firm, solid and united, and we are going to consistently express our unreserved condemnation of those who would try to disrupt the lives of our people and the prospects for economic progress in the future......whether you call it Derry or Londonderry, the city will have a wonderful opportunity in 2013.......so, there is a responsibility on citizens all over this island, North and South — wherever they see groups or organisations that are committed to the destruction of the peace process or the political institutions that the people of Ireland voted for in 1998 — to help the Garda and the PSNI in whatever way that they can, so that we can undermine the activities of those people....."
(More here , if you think you can stomach it...)
It would perhaps be some small mercy if it was possible to declare that Mr. McGuinness thought that he could ride two horses at the same time but , having listened to the above-linked 'Youtube' piece , such a declaration is not possible , and all the more so when it is taken into account that he spent at least several decades in the company of Irish Republicans before he abandoned those people for a half-crown's worth of political 'respectability'. This creature is just another one in a long line of turncoats (two-a-penny , unfortunately , in Irish history , especially in respect of this issue) but , even so , he would have been well-versed regarding knowledge of the other spies/British plants/operatives that trod the same path before he embraced that particular route. But , as with those other political pimps, the lure of easy money , a nice office , good suits and a large pension , not to mention the 'friendship' offered to him by Free State political parasites , loyalist and unionist gangsters and British 'Establishment' figures proved too much for him and he capitulated. And now he seeks to blame those who will not join him "on the other side" for the conflict. He has been purchased and fully intends to stay purchased : just another unprincipled career politician in a long line of such lackeys that are now unable to do Irish Republicanism any real damage. But that won't stop them from trying - they owe that much , at least , to their new 'friends'......
Thanks for reading, Sharon.