There is no way of telling now what section of the people considered themselves bound by that decision , but it happened that some time later , maybe even a year later, local volunteers censoring outgoing mails for intelligence reasons came across letters addressed to the estate office of the Marquess of Conyngham and the 'Irish Land Commission' and money in them , and they sent those letters back with a note to say this was no way to behave in face of the decision of the people. Word of this warning went abroad through the townlands and people came to look on it that loyalty to the Republic was, somehow , involved in the repudiation of landlordism : as if it was an aspect of the refusal to recognise the British court. The rent itself was no great hardship on the people , for it bore but lightly on their economy, but the decision to abolish it interpreted the Republican struggle to them and gave them an active part in it. Within the Republic they created their own landlordless Republic , and they were proud of it. By the time the Free State courts came to be established six , seven and even eight years of arrears had accumulated.......
(MORE LATER).

THE PETER BERRY PAPERS....... The Top Secret Memoirs of Ireland's Most Powerful Civil Servant : Dirty Tricks, Election '69/ Spying on a Unionist Politician/ Keeping the (State) Taoiseach informed/ The Garda Fallon Murder/ Advice to Jack Lynch- 'Fire the pair of them...'/ Vivion De Valera's advice to O'Malley/ Rumours of a Coup D'Etat/ The Internment Plot, November 1970/ Secret Meeting with William Craig. From 'MAGILL' magazine , June 1980.
"I had a number of photostat copies made of my aide memoire for the Minister with whom I discussed it in detail : he had come to Office , as Minister for Justice, in the previous month and he was hearing some of the background for the first time. I doubted to him whether it was wise to give such detail to Counsel but I recognised that this would be a political decision."
JULY 5 , 1970 :
"I had a phone call from Dr. Nolan , Secretary to the Cabinet , to be in the ante-room to the Cabinet chamber at 3.00pm on this , Sunday , afternoon and to inform the Commissioner , Garda Siochana, to be there too.
When I arrived the Chief of Staff was there also ; I had been given no idea of the purpose but I had taken the precaution of phoning the Head of 'S Branch'as to whether there had been any subversive actions , or activities, in the pipe line and he had said 'nothing unusual'. I had asked him to check with Military Intelligence and he came back with the same answer.
When the Chief of Staff , the Commissioner and myself were brought into the chamber we saw the Taoiseach , the Tanaiste , Mr Childers ; the Minister for Finance , Mr. Colley ; the Minister for Agriculture , Mr. Gibbons ; the Minister for Education , Mr. Faulkner ; the Minister for Defence , Mr.Cronin and the Minister for Justice , Mr O'Malley......."
(MORE LATER).
NO MORE FISCAL RECTITUDE - VOTE AGAINST IT : VOTE NO ! 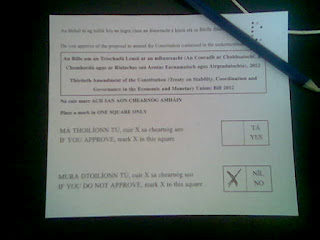 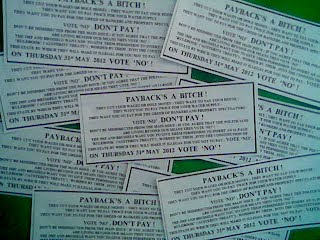 AN OPPORTUNITY FOR 'PAYBACK' ! This Treaty is about trying to shore-up a failed currency - the Euro. In this State , that failure is compounded by the activities of the gangster politicians ,property speculators and bankers who , although already wealthy and financially comfortable , wanted more and , because they move in the same 'circles' , closed ranks to protect each other's backs as their joint efforts bankrupted the State. Those who still have jobs , and those who have lost them , are now being penalised for the mistakes and the outright greed of that 'elite'. 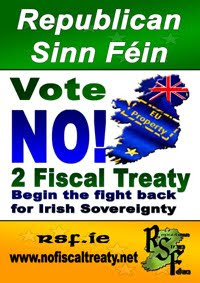 If passed , this Treaty will put in place in the Constitution of this State an eleven-page 'rule book' , compiled by a joint committee representing the EU Bank and the IMF , which will guarantee that those two foreign institutions will have 'first call' on any financial 'profit' made in this State - at the expense of the working class and the unemployed. Those in favour of that particular arrangement are of the same parasitic breed as , for example , Proinsias De Rossa and John Bruton , two of the many politically unprincipled chancers who now make a fine living for themselves in a backroom on the seventh or eight floor of the EU building in Brussels or some similar outhouse : in short , a 'YES' vote on 31st May 2012 will secure the futures of useless lumps of political waste like those two whilst condemning this and at least two future generations to a life of poverty. 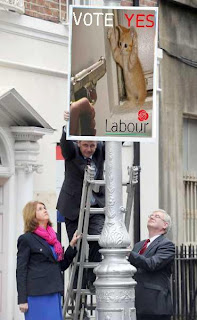 The 'YES' side consist of the same groups that implored you to 'VOTE YES TO LISBON : YES TO JOBS' and are employing the same scare tactics this time - despite the fact that the 'Lisbon YES' has left this State with an 'official' figure of 436,700 unemployed people , a figure which would be approaching 600,000 had emigration not been forced on our young people. This 'Fiscal Treaty' , if passed, will secure jobs for the political class in this State but will ensure emigration or low-paid jobs for the rest of us : on Thursday 31st May 2012 , tell them 'NO' , that lifestyle is not acceptable - 'VOTE NO!'
Thanks for reading, Sharon.