'THERE WILL BE ANOTHER DAY.....' By Peadar O'Donnell ; first published in January 1963.
Seán Lemass was Minister for Defence in the Republican Government , and he summoned senior officers of the IRA to a secret meeting in Dublin to review the position created by the defeat of the independence movement : de Valera was present , and I think he presided. It was agreed among us that the members of the IRA should be ordered to report back to their units and that a General Army Convention be called as soon as Companies were in a position to elect their delegates. Lemass would be assisted , meanwhile, by an advisory army council , and I was a member of that council. As the time for the IRA Convention drew near , I suggested at an army council meeting that the IRA should declare itself an independent organisation , but the proposal found no support. I moved it at the General Army Convention but here again the case I made won very little backing. An overwhelming decision against it had almost been taken when George Plunkett asked Frank Aiken whether there was any truth in a rumour of talks , on a responsible level, on the advisability of Sinn Féin TD's entering the Free State Parliament if the oath of allegiance was removed. Frank Aiken said there had been informal talks along that line - he was IRA Chief of Staff at the time. It would be difficult to give a picture of the commotion this statement caused. To those IRA delegates , the Free State Parliament was not merely an usurping authority but the meeting place of the very men at whose orders so many of our friends had been executed. There was no real discussion , just an outburst of pain and passion. IRA Officer Commanding , Cork 1 Brigade , in an emotion-choked speech , declared for the shelter of my resolution, which was carried by a stampede vote, but for reasons far other than had influenced me to move it as I had no idea, just then, that de Valera had in mind to ask Sinn Féin to drop its rigid* pose before history and give itself* a role in life.
(* - the author obviously wouldn't agree with me, but I would consider Sinn Féin's position at that time [and, from when it became 'Provisional' and up to 1986 at least] to be 'principled' rather than "rigid" , nor would I agree that it must, as the author suggests, change that which it believes in in order to "give itself a role in life". What good or value is there in 'a role in [political] life' if you are not true to yourself in that 'role' ?) (MORE LATER).

THE PETER BERRY PAPERS....... The Top Secret Memoirs of Ireland's Most Powerful Civil Servant : Dirty Tricks, Election '69/ Spying on a Unionist Politician/ Keeping the (State) Taoiseach informed/ The Garda Fallon Murder/ Advice to Jack Lynch- 'Fire the pair of them...'/ Vivion De Valera's advice to O'Malley/ Rumours of a Coup D'Etat/ The Internment Plot, November 1970/ Secret Meeting with William Craig.
From 'MAGILL' magazine , June 1980.
"Mr. Craig went on to say that there was considerable uneasiness in Government circles and that they were not at all satisfied that the IRA were not preparing for a resumption of hostilities. He said that his information was that the IRA attacks this time would be on persons rather than on police barracks and it emerged, at this stage, in a general discussion, that he was referring to a circular issued by Scotland Yard to all Chief Constables , Naval Installation Commanders etc warning them to be on the watch-out for IRA saboteurs. As I was already aware that Scotland Yard had informed the RUC that their information had come from the Garda I made a show of saying that we were the source of information to the British authorities , that we had intended to put them on their guard and no more than that , that we had no reason to think that an outbreak of violence was imminent. I said that if the Six-County statements were based on the information circulated by Scotland Yard they were completely out of proportion to the weight of our news and I mentioned that the Scotland Yard directive had been publicised in the 'Daily Express' newspaper of 26th August - I produced a photostat of the 'Daily Express' article and I deprecated such newspaper publicity. I suggested that it would be too much to expect that an organisation like the IRA would die overnight , that the organisation itself had admitted publicly in February 1962 that it had no public support ('1169' Comment : not the case **LINK** ...) and that they could not hope to reorganise on any scale without newspaper publicity. I suggested that publicity was their life's blood and that statements emanating from the Six Counties, such as Mr. Craig's , would be precisely what they would want...."(MORE LATER).
MARIAN PRICE DEMO , DUBLIN , SATURDAY 15TH SEPTEMBER 2012.

Marian Price (in green coat).
On Saturday 15th September last, we shared the centre of Dublin City with between one and two-thousand Irish republicans, who had marched from the Garden of Remembrance to the GPO in O'Connell Street in a show of solidarity with one of our imprisoned comrades , Marian Price , although if you were dependent on State/mainstream media you would never know that this event took place as both RTE television and its clone , TV3, completely ignored the fact that Dublin city centre was brought to a standstill for a couple of hours by those that filled O'Connell Street in support of the woman. Pure censorship , as expected. However , a 'YouTube' video of proceedings can be viewed here (thanks, Paula) and if you have a 'Facebook' account you can view pics and other videos of that demonstration here (...and thank you, Trev!).
Incidentally , we distributed 300 'packs' of Irish republican leaflets (a total of 1,200 items) before and during the demonstration , leaving us with only 200 'packs' for the 'Eve Rally' this coming Saturday (22nd September) which , as we know only too well from past experience, won't be enough - and so another 100 'packs' will , I'm told, be readied in time for distribution at the event. If you can't make it to this RSF-organised Rally - and you can spare about six minutes of your time - you can see where the organisers are 'coming from' by watching this video. And if you can make it , you'll be more than welcome , whether you're a Dub or you're from Meath , Donegal or Mayo (...or any of the other 28 Counties!) .
VISITING THE 'SINS' OF THE FATHER UPON THE CHILD.....

An extreme example , no doubt - but when a precedent is set it can open the doors for a lot more than was first envisaged : and that's the danger with this proposed policy which, should they be allowed to do so, they will implement with gusto. They will have to do so in order to preserve their own place in the pecking order, ensuring that they themselves , their family and their political colleagues are not forced to suffer the indignities of the 'ordinary life' which they condemn their 'subjects' to. It can only be a matter of time before this 'Sins-of-The Father' policy will be 'tweaked' to disallow a person his/her social welfare entitlements if there is another person in the same house already in receipt of a welfare payment. The politicians here have financially (and morally) insulated themselves from the ravages of economic recession but there is a price to be paid for doing so. And it's the rest of us that will be made pay that price. A white-washed wall is too good for them.
"IN THE 22nd YEAR OF HIS AGE...." 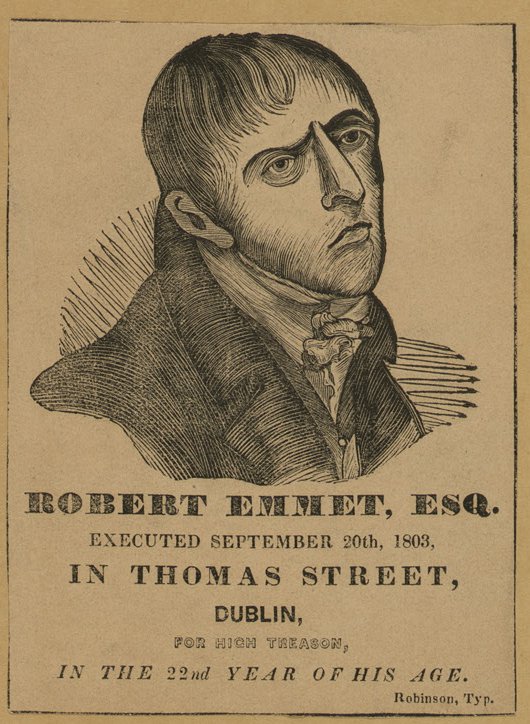 On 20th September 1803, Robert Emmet was hanged, drawn and quartered in Thomas Street, Dublin. In Thomas Street this Thursday night (20th September) at 7.30pm outside St Catherine's Church , a wreath will be laid in memory of Emmet and those other Irish Rebels and a few words will be spoken by Pat Wallace . Then , on Friday 21st September , the film ' 'Mise Éire' will be screened at the 'Ireland Institute' in Pearse Street in Dublin , at 6.30pm , following which a talk on James Connolly and the Irish Revolution , delivered by Lorcan Collins , will be held. At 9.00pm that evening , for 30 minutes, 'Songs of The Revolution' will be discussed. More information can be obtained from the organisers - The Ireland Institute, The Pearse Centre, 27 Pearse Street, Dublin 2. Phone: 01 670 4644. Please support , if you can or, at least, give them a ring and thank them for their continuing efforts in this field. It's an uphill struggle, believe me !
Thanks for reading, Sharon.