'THERE WILL BE ANOTHER DAY.....' By Peadar O'Donnell ; first published in January 1963.
Phil McCauley had a story to tell : the postman meeting a man on the road gave him a letter addressed to his brother. A letter is a family document for it is usually from a brother or sister in America or Scotland and the first member of the household the postman meets opens it ; this letter so scared the man who opened it that he fled with it to Phil McCauley , for it revealed that his brother was willing to pay the arrears if his name was "put down for the holding". Phil brought the frightened man to 'Black' James Duirnin : he wanted to pay the arrears himself rather than risk losing the holding, but he agreed to wait until I came from Dublin, provided I came at once. Here was a many-sided problem and every side was dark. Phil put me in the picture - the conspirator was a lumpy, violent man who could make great noise and his wife would be no peace-maker but his elder brother , who was unmarried, was the tenant and he was a frail man. He was too scared even to face his brother with the letter. Then, too , there was the danger that this letter was the work of some group in the village and that maybe we had only come on one incident in a campaign against us. There were a good few government supporters in Dungloe who were very hostile to me personally and who could easily lose sight of the hurt they might do the townlands in developing their attack on me. Phil had already called a committee meeting for the following evening, so I borrowed his bicycle and cycled to my father's home at Meenmore, a mile from Dungloe village. (MORE LATER).

THE PETER BERRY PAPERS....... The Top Secret Memoirs of Ireland's Most Powerful Civil Servant : Dirty Tricks, Election '69/ Spying on a Unionist Politician/ Keeping the (State) Taoiseach informed/ The Garda Fallon Murder/ Advice to Jack Lynch- 'Fire the pair of them...'/ Vivion De Valera's advice to O'Malley/ Rumours of a Coup D'Etat/ The Internment Plot, November 1970/ Secret Meeting with William Craig.
From 'MAGILL' magazine , June 1980.
" I said that with the resumption of parliament on 23rd October my Minister might receive more enquiries of this nature and that he might consider it necessary to issue a denial - he might find it necessary to say, if asked on this particular point, that he had communicated his views to the Minister for Home Affairs , my visit being the means of communication. The Minister asked me to convey his thanks to my Minister and said that he would consider the situation very carefully. The interviews terminated at about 1.10pm , and I formed the impression that the Minister was not convinced that the IRA were not actively preparing for a fresh campaign but that he did accept the suggestion that newspaper publicity should be avoided. I also formed the impression that the Minister and the Secretary knew very little about the IRA and the police machinery for dealing with the organisation. In my preliminary meeting with the Secretary he told me that Mr. Craig was unaware of Mr. Faulkner's meeting with Mr. Haughey. During my discussion with the Minister the Secretary interjected at one stage that their Prime Minister's statement in the USA that the IRA prisoners in Belfast were about to be released came as a surprise....."(MORE LATER).
A FINE GAEL-TYPE 'UNITED IRELAND'. 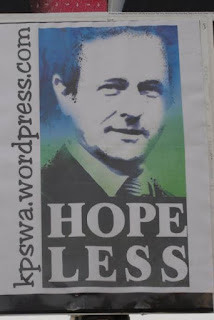 Someone in the current Free State administration apparently thought it would be a good idea to get Enda Kenny , on his recent American 'tour' , to 'play the Green Card' as well as to spoof about what a great job he and his political cronies are doing with the economy here in this banjaxed State , but of course there was no indication given of just how ignorant , arrogant and full of himself he and his crowd can be when confronted, rightly, by those of us that are sick to the back teeth of useless self-servers like them, who are just sitting it out - with permission from the IMF and the EU - whilst waiting for their golden handshake political pensions to mature.
The fact that he repeatedly referred to "two countries" (by which the buffoon meant the British-occupied Six County area and the Free State) is proof enough, if indeed such was in any doubt, that the man (and his supporters) remains confused in relation to the country in which he was born , not to mention the fact that his notion of a 'united Ireland' means rejoining the British so-called 'Commonwealth'. And to think that voicing such an opinion is considered to be 'rebellious' in the (Golden) circles where 'Two Countries' Kenny and his ilk reside. God help us !
YOU AIN'T SEEN NOTHIN'...... 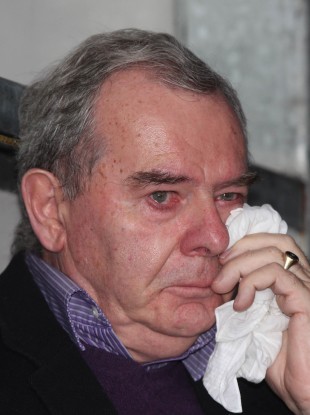 ....LIKE THE MIGHTY QUINN.
"I'm gonna do what I wanna do, I can decide 'em all
Just tell me where to put 'em and I'll tell you who to call
Nobody can get no sleep, I'm on everyone's toes
But when Quinn the Capitalist gets here
Almost everybody's gonna loose...."
(from here , with apologises [and poetic licence!])
Another rally in support of the Quinn family - the second such one - was held on Sunday last (14th October 2012) at which 'The Don' cried on stage : perhaps he had just read the following - "Take all the money raised this year by the cuts in child benefit. And from cutting the school clothing and footwear allowance. And all the cuts to jobseekers’ benefit, rent supplement and fuel allowances for the elderly. Throw in the restriction of one-parent family allowance to children under seven. Pile on all the cuts in back-to-education allowances and community employment schemes. Take all of that money from the pockets of the poorest people in Ireland this year and you still haven’t reached the amount Seán Quinn agrees he owes the Irish taxpayer.....Quinn is openly, flagrantly and quite proudly trying to hang on to this money that belongs to us. As he said - he took a “very conscious decision” to do “everything in our power to take as many assets as we could”. The basic intention is very simple – to transfer assets from the Irish people to the Quinn family...." (From here.)
It's very hard to understand the moral mentality of those people who took to the streets in support of this man and his business dealings and I can only attribute it , charitably, to a 'them-and-us' attitude promoted by the 'victim' (and swallowed by some) ie 'how dare that crowd in Dublin tell us what to do...'. That's a ploy used throughout this State by useless and/or self-serving politicians to create the illusion that those 'in charge' (those in 'the Big House' in Dublin) view the person concerned as not being 'one of us' and therefore someone who can bring to an end their cosy tax-payer-funded life on Easy Street/Kildare Street and, as such, someone to be ostracised - a 'mini-version' , if you like, of the British 'divide-and-conquer' policy. And, to the shame of those 'supporters' , it's a ploy that works , proving that there genuinely is no hope for some people.
THE 'TRAP' OF FALSE HOPE....

Regular readers will be well aware that I'm not 'into' sports of any kind - be it soccer , GAA , rugby or whatever - but even I was amazed at the sheer disregard for reality shown here by Giovanni Trapattoni after the football 'team' he manages (?) lost to a German team - "Why should I resign?.... we would still have seven games left.......when we go on the street they say ‘well done’ ......it’s not a crisis......I am sure we make a good job. Others say that, not me. I’m paid to do this job. Other people in Europe say ‘you do a good job’......I think we can achieve qualification......we have to win......" (From here.)
The man has either a penality-proof contract of employment (!) or a great pair of balls (!) or maybe he's in training (!) for a career in Leinster House , the 'home' of that type of 'do-as-I-say-not-as-I-do' bullshit. Whichever it is , it's a foul (!) way to treat the punters....
....but , no doubt, all will be forgiven as Trap's team managed to beat a team that are even worse than they are and, in much the same way that the sins of Fianna Fail will be forgotten and forgiven because the alternative (Fine Gael and Labour) are worse (or at least appear worse) than they are so, too, will the sins of Trapattoni be glossed over. Such is life in this valueless Free State.
FREE STATE EXECUTIONS OF 8TH DECEMBER 1922 TO BE REMEMBERED ON 8TH DECEMBER 2012. 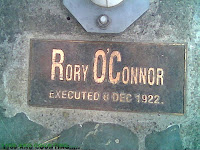 The 8th December 2012 will be the 90th Anniversary of the executions , by the then Leinster House Administration, of four imprisoned Irish Republicans - Richard Barrett, Rory O'Connor, Liam Mellows and Joe McKelvey. It was an act of revenge by the Free Staters for the death of Leinster House member Sean Hales , killed by the IRA. The four Irish Republicans were in prison at the time that Hales was killed and as such it was known by all concerned that none of them were involved in that particular act. 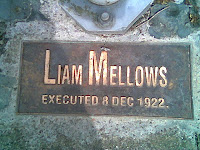 ".......Liam Mellows wrote his last letter (to his mother) on December 8th , 1922 - he was then executed by a Free State Army firing squad . However , forty-six years after that execution (ie in 1968) more information regarding that deed was made public .......
In a letter to the media forty-six years after the execution of Liam Mellows (ie on April 24th , 1968) a Free State Army Captain , Ignatius O'Rourke , who was present at the execution of Liam Mellows and the other three men - Dick Barrett , Rory O'Connor and Joe McKelvey - wrote that , a few minutes before Mellows was shot dead he [Mellows] sent for the prison chaplain , a Father McMahon . Free State Army Captain O'Rourke wrote that "... a few minutes later .." he saw Father McMahon leaving the room (cell) "...accompanied by Liam Mellows , with his right arm around Liam's shoulders , and they walked along together leading the group as we all walked to the sandbags . Liam and Father McMahon appeared to be in deep , friendly conversation , with no sign of discord , disagreement or argument , just like two men discussing some point in a friendly fashion . They continued to talk until Father McMahon left Liam in the number one position at the sandbags ...." (From here - scroll down to post dated Wednesday 22nd September 2004) 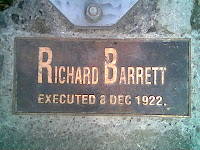 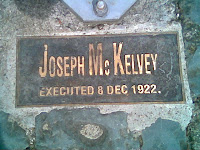 On Saturday 8th December 2012 , Republican Sinn Féin will hold a commemorative event in Wynn's Hotel , Lower Abbey Street , Dublin city centre, to mark the 90th Anniversary of the murder of those four men. Full details will be announced in the coming weeks.
Thanks for reading, Sharon.