.....assemble at the Spire in O'Connell Street , Dublin , at 1pm to show solidarity with imprisoned Irish republicans and in opposition to internment. All genuine republicans welcome - bring POW banners , posters and leaflets.

'THERE WILL BE ANOTHER DAY.....' By Peadar O'Donnell ; first published in January 1963.
My mother had a message for me , a letter that came by hand - it was from my teacher friend at Fintown and the innocent lass gave her full address and signed her name. She named the man who bought the seized cattle. My mother, wise in the ways of the local post office, would not trust the post with a letter that came by hand. Well, this was something ; it certainly was something. I told my father and mother of this other problem that brought me racing down from Dublin and my father said at once that I must go and see these people. They were good people and it must be that I had not the full story , and he said that I should go the first thing in the morning. I knew, as soon as he said it, this was the way to face this difficulty and there was still enough night left until bedtime for me to put it to the test ; I took out Phil's bicycle and hurried on my way. It was latish when I got there and I heard their voices in the murmur of the rosary as I sat the bicycle against the wall. I waited until the voices died away and then I pulled the latch and went in - only foreigners knock. They were still on their knees , a woman and two men, all late fiftyish, and the woman spoke at once : "Under God , man, at this hour of the night, what brings you?" The men got to their feet and they spoke a vague greeting, but she would have none of it : "Let him state his errand". I rested my hands on the back of the kitchen chair which the man of the house pushed towards me and I told her I'd traced the seized cattle and that I wanted her man to go with me and take them back and that I didn't know what the devil had got into her.....(MORE LATER).

THE PETER BERRY PAPERS....... The Top Secret Memoirs of Ireland's Most Powerful Civil Servant : Dirty Tricks, Election '69/ Spying on a Unionist Politician/ Keeping the (State) Taoiseach informed/ The Garda Fallon Murder/ Advice to Jack Lynch- 'Fire the pair of them...'/ Vivion De Valera's advice to O'Malley/ Rumours of a Coup D'Etat/ The Internment Plot, November 1970/ Secret Meeting with William Craig.
From 'MAGILL' magazine , June 1980.
" I had naively drawn attention to Mr Smith's silence to the Garda when they met on 6th September , to the Prime Minister's statement about the impending releases and to Mr Craig's statement around the same time. After the discussions I had lunch with the Secretary : he was obviously disinclined to pursue the subject further. We arranged that if the occasion required it communication about IRA matters could be made direct between ourselves. I had feared a request for communication at various levels within the police. After lunch I had talks with the Secretary on matters relating to the probation system, the functioning of the Courts and so on in which he was very helpful insofar as a man of good manners could be so. He came out in the rain, bareheaded, to see me to my car but, nevertheless, I could discern no warmth. I think that he was nervous of being seen alone with me."
[END of 'The Peter Berry Papers'].
(NEXT : 'Fear and Loathing in South Armagh' , from 2003.)
108Ú ARD-FHEIS , SINN FÉIN POBLACHTACH , 10-11 Samhain 2012. 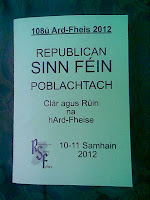 108th Ard Fheis , Republican Sinn Féin , 10th and 11th November 2012.
The 108th Ard Fheis of Republican Sinn Féin will be held in Dublin over the weekend of Saturday 10th and Sunday 11th November 2012. The 45-page Clár contains a total of 138 motions under different headings such as political and electoral policy , prisoners, constitution and rules, social and economic , organisation/activities , education and culture, publicity and Saoirse and international affairs. 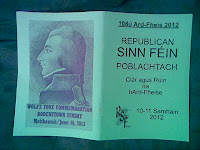 The check-in of delegates is at 9.30am each day and delegate/visitor admission cards will be available at the door of the Conference Hall provided RSF Head Office has been notified in advance of your request for same : all visitors must be vouched for by a member of Republican Sinn Féin. The Presidential Address will be delivered by An tUachtarán Des Dalton on Sunday at 12.15pm. It is intended that the Ard Fheis will end the Saturday session at 6.00pm and and will wrap-up at 4.30pm on Sunday , in between which a ballad session will be held (9pm Saturday night) in the Hotel venue. Also , the annual RSF National Private Members Draw will be held at the venue over that weekend (six prizes : 1st two 2013 All-Ireland tickets [one hurling and one football] plus €500 spending money/ 2nd €500/ 3rd €300/ 4th 19-inch flat screen TV-DVD combi unit/ 5th €50 voucher for Irish Freedom Press and 6th bodhrán - and RSF will also be holding a 650-ticket raffle that same weekend in a different venue!) and finally - Irish Republican Resistance Calendars for 2013 will be available at the Ard Fheis , priced at about a fiver each.
Due to an outright (and outrageous...) refusal (!) by RSF Head Office to postpone the Ard Fheis so as it doesn't clash with the Monthly Raffle , myself and the usual raffle crew won't be present for all of it (...we hope to put in a few hours work at it on the Saturday..) as we will be our usual busy selves in the other hotel , running the Monthly Raffle. And knowing our luck, the two raffles just mean that we'll loose twice as much !
"A COUNTRY WITH A CITIZEN LIKE HIM WILL NEVER SURRENDER...." 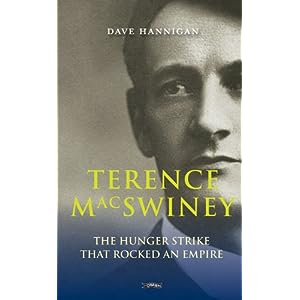 - the words of a young man who was then employed as a dishwasher in a London hotel , Ho Chi Minh , on hearing of the death of Irish revolutionary Terence MacSwiney. After the murder of Tomás MacCurtain in March 1920, Terence MacSwiney was elected as the Lord Mayor of Cork. He was arrested under the 'Defence of the Realm Act' in August 1920 and sentenced to two years imprisonment : he embarked on a hunger strike in Brixton Jail and died after 74 days on the protest.
Those words were spoken on Monday 25th October 1920 - today (Wednesday) is the 24th October 2012 : almost 92 years after the event, by date. Terence MacSwiney (1879-1920) was the Commanding Officer of the Irish Republican Army , who died on the 74th day of his hunger strike in Brixton Prison on October 25, 1920, inspiring George William Russell ('Æ') to pen the following :
See, though the oil be low more purely still and higher
The flame burns in the body’s lamp! The watchers still
Gaze with unseeing eyes while the Promethean Will,
The Uncreated Light, the Everlasting Fire
Sustains itself against the torturer’s desire
Even as the fabled Titan chained upon the hill.
Burn on, shine on, thou immortality, until
We, too, have lit our lamps at the funeral pyre;
Till we, too, can be noble, unshakable, undismayed:
Till we, too, can burn with the holy flame, and know
There is that within us can triumph over pain,
And go to death, alone, slowly, and unafraid.
The candles of God are already burning row on row:
Farewell, lightbringer, fly to thy heaven again!
"There can be no peace between wrong and right , between truth and fallacy , between justice and oppression , between freedom and tyranny . Between them there must always be war until the wrong is righted , until justice is achieved , until freedom is won" - Terence MacSwiney (funeral video here.)
The man had one child - a daughter, Máire, - by his wife , Muriel Murphy , and mother and daughter, too, left a mark in Irish history , unlike those who killed and tortured that family - they left a stain on our history, which remains with us to this day.
MICHAEL FITZGERALD (CORK): 17TH OCTOBER 1920 , 67 DAYS.
JOSEPH MURPHY (CORK): 25TH OCTOBER 1920 , 76 DAYS.

Joseph Murphy.
Joseph Murphy died on hunger-strike , after 76 days, on the same day as Terence MacSwiney (Monday 25th October 1920) : MacSwiney died at 5.40am , hours after Murphy's death (more here) and earlier in October that year Michael Fitzgerald had died on hunger-strike (on the 17th) after 67 days (more here). A pictorial list of all 22 Irish hunger-strikers can be seen here.
THE STATE OF THE STATE WE'RE IN : VOTE 'NO' ON SATURDAY 10TH NOVEMBER 2012.

On Saturday 10th November 2012 the electorate in this State will be given the opportunity to vote 'Yes' or 'No' to what is, in effect , a proposal which would (compared with State law as presently constituted) allow State politicians the final say - in a nutshell - in how you are rearing your child or children. If the politicians get their way and a majority 'Yes' vote is recorded on the day (in what will be the 31st referendum to the Free State Constitution) a new Article to same will be embedded ('Article 42A') in place of the existing FS Article '42.5'- 'in order that the rights of the child be strengthened' , according to those campaigning for a 'Yes' vote.

A second-hand car salesman/politician , promising you something he can't deliver and, even if he could, chances are it would fall apart at the first bump....
At issue in this particular Free State referendum is the replacement of the present wording (in relation to how you rear your child/children) '...by appropriate means..' with the wording '...by proportionate means as provided by law..'. The former (existing) wording can and has taken into account the circumstances involved ie whether the parents are wealthy or unemployed - if wealthy, the child/children will have a different upbringing , materially so, at least, than the child/children of an unemployed parent(s). Depending on whom you listen to, those 'circumstances' will either be 'significantly tweaked' or 'rode roughshod over' but one thing is for sure : those seeking to 'tweak/ride roughshod over' the existing scenario are wealthy and morally blind individuals who have no notion of what it is to feel financially anxious or to have to decide between part-paying an outstanding bill or putting a dinner on the table and if you are in the unfortunate position of having to decide between food/bills then that is not fair on your kids and their 'solution' is to put a law in place whereby those kids could more easily be removed from 'that cruel environment' whereas the proper solution would be to help the parent(s) out of the poverty trap they are in. 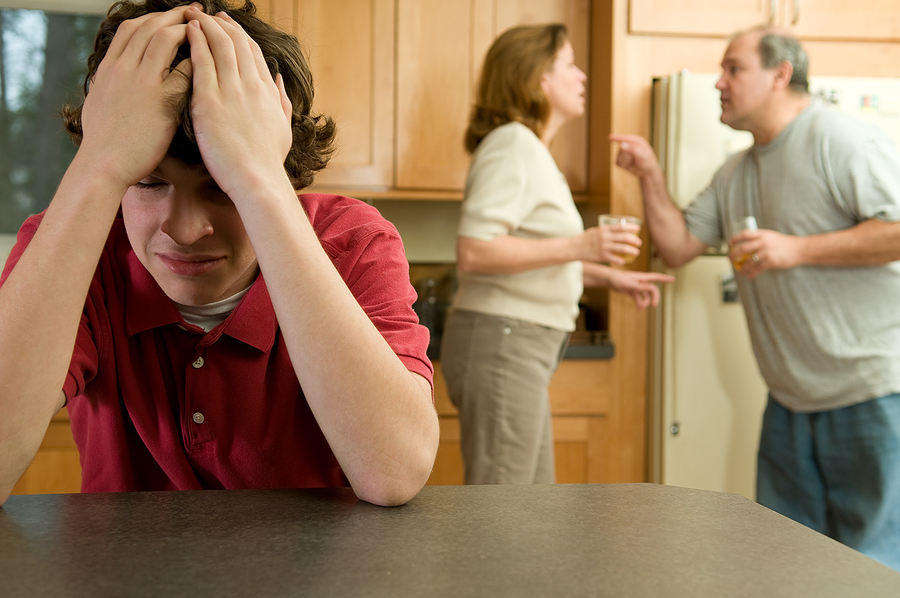 Troubled parents have a row : do you think it best that the child/children be removed from them or that they should be helped to improve their home environment?
Err on the side of caution on Saturday 10th November next : use your vote in this Free State referendum to prevent a corrupt institution - the State in all its guises - from having the 'right' to tell you how your family life should be lived , using their privileged lifestyles as the yardstick. VOTE NO!
Thanks for reading, Sharon.

'END A DAZE' FOR THOSE FORCED TO BAIL OUT THE BANKS.

Kenny recently made the cover of 'Time' magazine because he's following a programme constructed by right-wing economists : save the big business-class at all costs.
If this useless IMF-inspired politician can remove his head from the pages of 'Time' magazine for any length of time then maybe one of his many publicly-paid political spin/spiv doctors can bring this report to his attention and further encourage him to broaden his horizons with a follow-up read of some examples of how the policies he is imposing are affecting real people.
The nearest this clown ever got to the pulse of those he purports to represent in this State was when he called for a "revolution" , but he wasn't near enough : he considers himself to be the leader of that 'revolution' whereas, in reality, he and his type are the reason why one is needed.
Sharon.