'THERE WILL BE ANOTHER DAY.....' By Peadar O'Donnell ; first published in January 1963.
I was brought before District Justice Cussen and I observed the usual IRA formula - I refused to recognise the court. The State asked for a remand for a week and Cussen, the kindly man, took the unusual step of asking to see my wife after the court adjourned to say he didn't like the idea of sending me to Mountjoy Jail and would she please explain to me that all he wanted from me was my word that I would turn up there that day week. No bail , just my word.
I could not avail myself of this neighbourly offer, so Mountjoy Jail again it had to be , and ghost-rich 'D Wing' at that : it was to this Wing that the Four Courts Garrison was brought in 1922. I found the experience of sharing the prison van that shuttled from the jail to the district court and back , with men on remand on a great variety of charges, intensely interesting ; occasionally strangely disturbing. Scared men are pathetic and the man in trouble for the first time for an act not sanctioned from within himself is a scared man.
There were those who took things lightly , of course, but each man was pretty well alone with his thoughts , and there was no buoyancy left in any of them to sustain him in the presence of the jailer. By and by they would find odd ways of sharing life together , but the numbness of the early days had to wear off first , as there is a climate of oppression which derives from the sense of defeat in the prisoners themselves.....(MORE LATER).
THE WRONG ARM OF THE LAW......

Roisin McConnell claims she was abused, called "a murdering bitch" , "Satan" and "the Devil". She claims gardai told her that her child would be taken away, that her husband was having an affair, that she would "do seven years in jail" and that she was "going to get stabbed". A named garda told her that when this happened, he would spit on her grave, she says.
By Sandra Mara. From 'Magill' Annual 2002.
Roisin, wife of Mark McConnell , was also arrested , despite the fact that several gardai at a pre-arrest conference in Letterkenny Garda Station had expressed their concern about their powers of arrest of the wife of a suspect "after the fact" and indeed, about the legality of her arrest.
On the morning of the 4th December 1996 , Roisin McConnell , the 36-year-old mother of a young baby, left home at Tullyvinney, Raphoe, to go to work. A workmate, Lorna O' Donnell from Rusky, gave her and another friend, Marie Pearson, a lift. All three women headed off to work at the 'Fruit of the Loom' factory in Raphoe and, as they drove along the road they approached Raphoe Garda Station, close to the McConnell family home.
They were surprised to see around 20 gardai and detectives on the roadway. Lorna O'Donnell's car was stopped and Garda 'A' told Roisin McConnell , who was seated in the back of the car, - "You're under arrest for the murder of Richie Barron." She was taken from the car and put into the back of a Garda car, surrounded by four gardai. Garda 'A' sat in the back with McConnell and another garda.......(MORE LATER).
30TH JANUARY 1972 - 30TH JANUARY 2013. 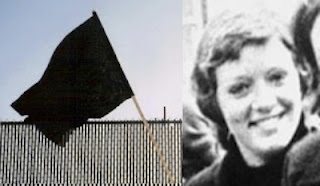 "It is not enough to say we were born to be Republicans, it’s more precise to say Republicanism is part of our DNA....." - Dolours Price.
I met Dolours three times in the past number of years - once in Dublin , once in her native Belfast and once in Derry - and , on each occasion, I was in the company of different members of the Republican Movement and we bumped-into each other at protests/pickets in connection with three separate issues. But the one 'constant' was Dolours : a deeply committed and resolute republican activist with a sharp instinct and a genuine grá for her passion - Ireland.
The sentiments I was going to express here have already been expressed in a far more eloquent manner by another stalwart supporter of Irish Republicanism , Ruairí Ó Brádaigh , and I am proud to re-post them here :
"The untimely passing of Dolours Price is a moment in Republican history. Born into a staunch Republican household in Belfast she came under the influence of her father, Albert Price, who was active in the 1940s and was imprisoned, and her aunt Bridie Dolan who was severely injured when a grenade she was handling exploded prematurely.
With the birth of the Civil Rights movement in the 1960s, Dolours was to the fore in all activities. When the struggle escalated and internment without trial was brought in, she and her sister Marian joined the Republican Movement. There followed activity in London and prolonged imprisonment and hunger strike. This last development was met by force-feeding for more then 200 days until demands for relocation to the Six Counties were met, but were not implemented for more than two years.
It is certain that the brutality of the protracted force-feeding had grievous effects on Dolours both mentally and physically. It surely brought about an early release for both sisters. Dolours rejected what she saw as a ?surrender process? from the outset. When the Stormont Agreement was signed in 1998, she visited the Ard-Oifig of Republican Sinn Féin in Dublin and made her position clear. By attending the subsequent Ard-Fheis of Republican Sinn Féin she nailed her colours to the mast.
When attending the 25th anniversary in Ballina of the death on hunger strike of Frank Stagg in 2001, she spoke at the grave of an old friend and comrade, Jackie Clarke. Here she made her stand once more.
In more recent times she publicly attacked what she saw as deceit, hypocrisy and public lying in high places. She exposed it relentlessly. She saw all that as a contradiction to the mountain of sacrifice that had been made over the decades. She herself had contributed more than her share and she was outraged at the developments. Never did she participate in deceit, hypocrisy or public lying. She will be remembered : cuimhneofar ort, a Dholours.You have triumphed in the end. Sincere sympathy is expressed to her sisters Marian and Clare and to her two sons, Danny and Oscar." Slán go foill anois, a Dholours.
' THERE WAS POLITICAL INTERFERENCE IN DECIDING AND PRIORITISING HOSPITALS....' 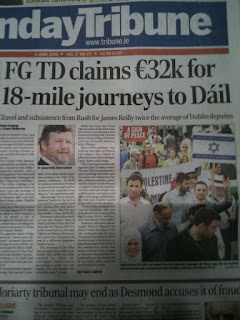 But how much does he charge for journeys to hospitals....?
Oh Really Reilly : we have mentioned the antics of Mr James Reilly before (as have others) but it seems the man still has a reckless desire to pad-out his own future by (ab) using not only his political position but taxpayers money, too. It has been remarked in some left-wing political circles that the man's political desire and his machinations to further secure his own financial future in so blatant a manner is puzzling considering that he is already a millionaire but the only element of it that I find 'puzzling' is why anyone of a socialist inclination would find it surprising that a millionaire Fine Gael/right wing politician would seek to increase his 'stakeholding' , thus ensuring an even more luxurious lifestyle and retirement for himself than he had already secured ?
The answer , in my opinion, is because of an absence of ethics on the part of the afflicted person ie greed , described by theologian Thomas Aquinas as "...a sin directly against one's neighbour, since one man cannot over-abound in external riches without another man lacking them..." . Mr Reilly probably never heard of Thomas Aquinas as there is no profit to be gained by him in doing so. We live in a sad society , as is so remarkably demonstrated by Mr Reilly and his ilk.
DEMOCRACY AT WORK : MORE OF THIS IS NEEDED. 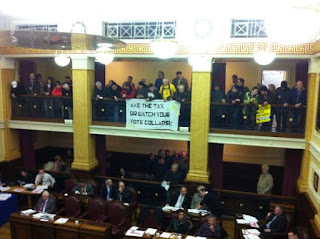 Taxpayers in Cork demanding a voice in how their tax money is spent.
Better late than never : hopefully this protest is a sign of things to come and it will become a regular occurrence to witness citizens directly challenge their employees (ie politicians) in regards to the manner in which they pompously and arrogantly waste taxpayers money on themselves and only then consider using the left over coin to supply public services. Until such time as the corrupt political system in this State is changed for the better we need to do this. Congratulations to the organisers and to all those who took part - to quote Oscar Wilde : "Yes , I am a dreamer. For a dreamer is one who can only find his way by moonlight, and his punishment is that he sees the dawn before the rest of the world."
It would be reassuring to think that this protest and, hopefully, future protests like it, will herald a 'new Dawn'.
HORSE AND BULL FROM A COLOUR-BLIND SHIT STIRRER !

Not 'FAIR' , Willie - inverted flag and Balaclaved Burgers conspire against our Hero....
This wee blog wishes continued success (!) to the (much-deserved) misunderstood Champion of All that is Good and Proper , Willie Frazer, whom we have mentioned before in this lil' corner of cyberspace. In an attempt to capitalise on 'BurgerGate' ..... 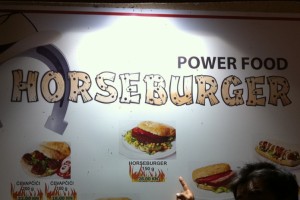 ......our Willie claimed that the PIRA was ultimately responsible for that culinary terrorism (...and for a lot of other things, too, apparently..) - Interviewer : "The (P)IRA were involved with putting horsemeat into beef products?"
Willie Frazer : "Yes. Basically old fat cows that are 30 months old have been put into the food chain because the republicans have the means of getting it in....." (From here)
It was probably whilst choking on one of the offensive burgers that poor Willie confused his colours and almost set his gang of thugs on the teachers , staff and pupils of a school which he described as "....the junior headquarters of IRA youth..." . If nothing else, in securing the headlines that he does, Frazer is a prime (!) example of the embarrassing human flotsam left behind when a wreckage of an 'empire' seeks to extract itself from an area in which it can no longer use barbarism to control without having its use highlighted. His 'Best Before' date is long gone.
Thanks for reading, Sharon.