'THERE WILL BE ANOTHER DAY.....' By Peadar O'Donnell ; first published in January 1963.
My first startled reaction was that IRA repudiation of the raid would take the heart out of the resistance ,for , in however vague a way, they must have encouraged themselves to believe they were not without some support from that body. Fortunately Agent Sweeney called the raiders "Republicans" so that the word "official" had no meaning.
On the level of Republicans the raid was an affair of neighbours , but what was I to do about this telegram ? Had the police come to challenge me on the raid, I should have refused to discuss it or, maybe, in order to lessen the challenge that was in it , and the excuse it gave for vigorous government action. I might have said I was certain the committee had nothing to do with it but I could not dodge this cheeky, impertinent message, so I replied that I would not use my influence to have the books returned nor even to have the landlord's agent returned should he happen to serve a useful purpose by following the books, and I published both messages in that week's 'An Phoblacht'.
The townlands were delighted with the raid, and I soon had encouraging reports that people hitherto hesitant were now coming our way. I urged on Phil McCauley that this was a time to win new townland delegates and impress on everybody that the townlands were their own weapon against the bailiff. It should not be possible for the bailiff to drive cattle out of the area without finding himself and his escort driving through a storm - but I had no great success along this line. The government could strike back with a lot more confidence at a movement that left most of its chores to small groups moving in the dark. Phil reported that for the moment the bailiff seemed to have passed out of the picture and that the townlands were now infested with plain-clothes policemen, looking for evidence to pin the raid on local people.(MORE LATER).
FEAR AND LOATHING IN SOUTH ARMAGH......

The inside story of a personal feud that has left one man dead and tarnished the reputation of the PIRA's most fearsome brigade.
From 'Magill' magazine , April 2003.
By John Keane.
Should the generals be simply ordered to dump arms - the 'pike in the thatch' solution - or should the army be stood down and the generals retired? The (P)IRA statement condemning the killers of (P)IRA Volunteer Keith Rodgers was signed "P O'Neill, Runai" , the traditional imprimatur of the chief of staff but, if the (P)IRA is formally stood down, then that signature can no longer be used as a flag of convenience to drape the coffins of the victims of vendetta. Slab Murphy may just have shot himself in the foot.
[END of 'FEAR AND LOATHING IN SOUTH ARMAGH......']
(Next : 'WRONG ARM OF THE LAW' , from 2002.)
HOIST THE BUTCHERS APRON..... 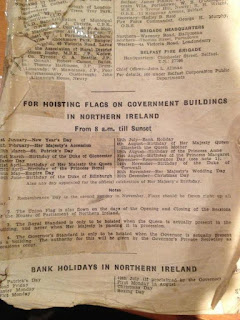 Even the now-decreed 18 days is too long to fly that soiled rag in any part of Ireland.
When the Stormont Treaty was being spawned in 1998 by most of the political parties in the Six Counties and the Westminster and Leinster House administrations , one of the 'terms and conditions' that almost closed it down was the demand from the so-called 'republican' element, Provisional Sinn Féin, that 'policing powers' be gifted by Westminster to the Stormont Six-County Assembly and, after many tantrums were played-out in front of the cameras, the wish was granted , prompting 'Lords' Adams and McGuinness to declare that they could now "put manners" on the RUC(/PSNI).
The on-going (six-week old, at the time of writing) 'Flag protest' in the Six Counties has put paid to that lie : the 'unmannered' RUC(/PSNI) paramilitary 'police force' , renowned for moving against Irish republican street pickets , demonstrations and protest marches has, as expected by republicans, donned the kid gloves in relation to their fellow pro-union colleagues and even Provisional Sinn Féin members and supporters - and voters - must now be asking themselves where the 'impartial police force' is that they were promised in that 1998 Treaty - where is 'the manners' that was supposedly imposed on that pro-British 'police force' as a part trade-off for voting in favour of that Treaty ?
The reality , as stated at the time by the Republican Movement, is that that Treaty was but yet another stop-gap by Westminster and Leinster House to be used to buy time re 'the Irish Question' and to use that bought time to convince those that wanted to believe it, that 'the conflict is at long last resolved'. That claim, like the 'now-mannered RUC(/PSNI)' , is nonsense : there is no such solution possible as long as Westminster continues to interfere in Irish affairs and the reason for that is clear - it is that very act of interference that is causing the problem. Remove the interference - rather than 'tweak' it - and the problem will be removed. And that is the objective of this Movement.
"AND NOLAN AND MAHON BOTH SCORE IN A THRILLING FIRST-OF-SEASON CONTEST....!" 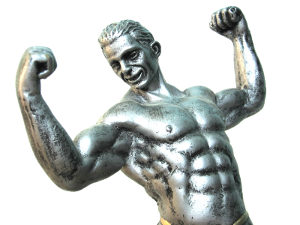 Mr.Nolan (or is it Mahon?) poses for a pic on hearing that he's 'scored' but freezes in sheer terror on realising that his wife is aware that the ticket cost him only €2 and not "the shirt of my back.." !
Those bleedin' GAAaaa and soccer supporters just can't take no for an answer!
As hoped for, we received 23 unsold raffle tickets back but, by the time they were delivered to us, we had €70 (enough to buy 35 tickets!) in the 'stand-by' dish from wannabe punters , 12 of whom we had to give money back to - plus, of course, we had the usual couple of dozen punters call over to our table between 12 noon and 2pm, looking for tickets , all of whom we had to disappoint :-( !
One person who was LOUDLY not disappointed was Tony Nolan , from the Dublin 10 area, who was sold ticket number 181 by one of our regular ticket sellers , bus-driver Anto - Tony won first prize , €200, and himself and Anto immediately retired to the bar after booking a taxi for 4pm to take them both back home! But before he left our table, Anto pulled-out the second prize - ticket 449 - €100, which our Gerry had sold that very afternoon to local man Alex , who promptly disappeared to the 'winners enclosure' to join an exclusive club! We found Alex (under a table!) and managed to calm him down enough to pull-out the third prize (€40) for us, and he removed ticket stub 125, which elicited a loud 'YES!' from Kildare resident Cameron , who had bought her ticket from Darren, who was rewarded with a pint and a big sloppy gooser from the Diaz look-a-like. Darren was later heard crying hysterically, lamenting the fact that he hadn't sold her the first prize lol!
Cameron put her delicate hand in the raffle drum and removed stub 014 - 4th prize , worth €20 - which was won by Robert, from Dublin city centre, who was sold the ticket by Owen and, in Robert's absence, Owen pulled the fifth prize , (€20) for us - and 'JR' , from Wexford, stub number 380, was a few bob richer for it. Sixth prize went to a Wicklow man , Pat Keogh (388) who then pulled the second-last prize (also €20) which was won by Tommy D , who bought the ticket (495) from our Jeff , one of the lads who works that hotel for us regarding ticket sales. Tommy had the honour of pulling out the 8th and last prize of €20 which was won by Jimmy Hughes from Roscommon on stub 475.
Apart from the football madness and the packed house (and the never-ending requests for non-existent tickets!) the day , and the raffle, was great craic and a huge success : and we are fully confident that we can do the same again next month, but will ask Mr Nolan(/Mahon ?) to keep his shirt on.....!
'BLOODY SUNDAY' PICKET , DUBLIN , JANUARY 2013. 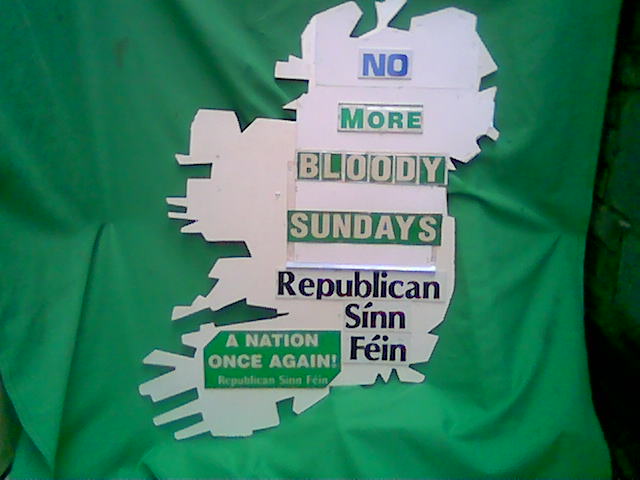 RSF 'Bloody Sunday' placard which will be on display in Dublin on Saturday 26th January 2013.
After a peaceful Civil Rights march on January 30 , 1972 - from Creggan to Free Derry Corner, in Ireland - units of the British army Parachute Regiment opened fire with automatic rifles and shot dead 13 unarmed civilians , injuring many more . It was later revealed that some days prior to the massacre , the British soldiers involved had been briefed to "...shoot to kill.." at the march.
"This Sunday became known as 'Bloody Sunday' and bloody it was . It was quite unnecessary . It strikes me that the (British) army ran amok that day and shot without thinking of what they were doing . They were shooting innocent people . They may have been taking part in a parade which was banned , but that did not justify the troops coming in and firing live rounds indiscriminately . I would say without reservations that it was sheer unadulterated murder. It was murder , gentlemen." - the words of British Major Hubert O'Neill , Derry City Coroner, at the conclusion of the inquests on the 13 people killed that day by the British Army.
On Saturday 26th January 2013 , a picket to mark the Anniversary of that massacre will be held at the GPO in Dublin , from 12 Noon to 2pm . All genuine republicans welcome!
TRADE UNION-ORGANISED 'SAFETY VALVE'. 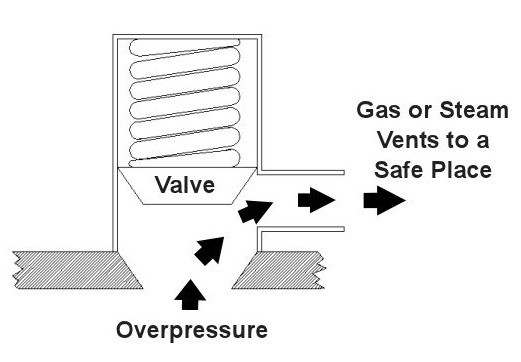 THIS WAY - to blow off steam....
An ICTU protest against wage and welfare cutbacks, in which SIPTU, amongst other trade union groups will take part, has been organised in this State for Saturday 9th February 2013 : street protests will be held in Dublin, Cork, Limerick, Galway, Sligo and Waterford and, no doubt, hundreds of thousands of people will take part, and rightly so. And, again without a doubt, the trade union leadership will be given a loud 'welcome' - and rightly so.
This blog has posted before on this issue and we will be taking part in that protest on 9th February next but will be doing so to voice our objection against those in Leinster House more so than as a show of support for the leadership of the trade union movement in this State. And Mr O'Connor and anyone else beside him , on or off the Dublin stage, can again call me and other workers and the unemployed "fascists" if he wants and/or he can again speak over us but that won't change the fact that he is emotionally and morally closer to those he is allegedly protesting against than he is to those on whose behalf he claims to be protesting. And no amount of waffle or fist-shaking can change that.
Thanks for reading, Sharon.