The most I could promise was to go home by Sligo and somehow contrive to meet the prison doctor and ask him to see to it that Black James Duirnin would spend his time in prison in the hospital. Phil's responsibilities were sharper than mine - he was dealing with neighbours he lived among, and he was a kindly man. Black James lived across the way from him.
It is likely we were both on edge , as we were parting in a mood of some impatience. Phil put his head in the car window to me - "Did anybody ever tell you , Peadar O' Donnell, that you are an unpopular bastard among us..." , and all the tension of a few very anxious days went out of me in one yelp of delight. From the moment the decision to stand and fight was taken, I encouraged myself to think that it was within themselves that the people found this new resolution and I wanted to believe that , a bit for their sake and a bit for my own.
I doubt whether I could explain easily why in an evening of great excitement I gave so much heed to small flicks like Eugene Doherty's message to James Doran and Phil McCauley's revelation concerning myself, but they are two incidents that I recall vividly. They gave me confidence that I was really walking among people : I was as sure as could be that now, when they were free to do it, they would be few and far between who would go in and make peace. But the backdoor was there for whoever wished to use it and it no shame to a man to avail himself of it. (MORE LATER).

By Michael O'Higgins and John Waters. From 'Magill Magazine' , October 1988.
The post mortem evidence is, of course , crucial , but the finding of the car bomb is much less so. The explosives in Marbella might be significant in the eyes of the British authorities , press and public , giving as they did some kind of emotive justification for what otherwise might have been much more difficult to rationalise, but in the context of the evidence which the jury needed to consider the explosives find was a moveable feast - it could have been the makings of one , two or several bombs for detonation in Gibraltar - or possibly not destined for Gibraltar at all.
Essentially , then , the jury was asked to look at the case as the story of one afternoon. The overwhelming weight of the evidence related to events in those four hours the three IRA members spent in Gibraltar between the time they crossed the frontier and the time of their deaths. The background was only relevant in allowing them to decide if the British soldiers might reasonably have been expected to believe what they said they believed at the time of the shootings. What happened afterwards was largely academic.
The account the inquest heard of the events of that Sunday is, for rather obvious reasons , largely a one-sided story as three of the main players in that afternoon's events are dead. What we heard mostly was the official version of how they died , with some input from a number of eyewitnesses. It is still , we believe, a telling story and , moreover, it provided the basis on which the jury arrived at their decision. 'Magill' magazine has reconstructed these four hours from the evidence given to the inquest in the course of the nineteen-day hearing and we have also prepared some maps to accompany this article , showing the essential geography of the area relevant to the story. Essentially, for the purposes of this story, we are concerned with two parallel streets converging at both ends. At one end there is the square, varyingly referred to as the assembly area (for the band of the 'Royal Anglian Regiment' , the target of the bomb plot) or Ince's Hall. At the other end there is Winston Churchill Avenue , where all roads from the town area converge before the airstrip and the frontier, and where the Shell garage which looms so large in the story is located. (MORE LATER).

HEATING UP FOR A REDUCED OLD AGE PENSION. 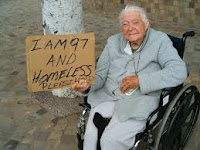 The cost of heating a home is set to increase and, at the same time - October 2013 - the State old-age pension is apparently going to be cut by €10 a week. The slíbhín manner in which these issues are imposed here in this half-arsed State will more than likely see a 5% increase in the price of home heating gas (as opposed to the 7.22% increase that is being discussed) and an old-age pension cut of €5 a week rather than the publicly announced figure of €10. It's a ploy that has worked for politicians everywhere as it allows them to claim that they tried to prevent the (pension) cut in total but a 50% reduction in the amount to be cut was the best they could do and a similar claim will be made by them regarding the gas price increase ie 'it's not as much as the company wanted...' .
A protest against the above (and other) State-imposed hardships will be held outside Leinster House on Wednesday 18th September next at 6pm , as that is the date when the temporary inhabitants of that vile institution return to 'work' - at 2.30pm - after their 'summer holidays' , which they began on Friday 19th July last. Hopefully , the pensioners will join with us again on the 18th and between us all we can put the frighteners up them - again !
One person who most definitely won't be present on that protest is Mary Harney , who has been richly rewarded with taxpayers money by her colleagues in Leinster House for further wrecking that which then remained of the State healthcare system : 'Mary Harney retired with a package worth more than €300,000 and is entitled to an annual pension of over €120,000. She receives an annual ministerial pension of over €70,000 and a TDs pension of €50,600. She also received a pension lump sum of €160,000, a termination lump sum of about €17,000 and monthly termination payments from the Oireachtas during her first 12 months of retirement worth another €66,900....' (from here.) In order for such outrageous payouts to continue to be handed over to her and the hundreds like her, the 'little people' must suffer - but let's not do so in silence or behind closed doors. See you on Wednesday 18th September next at 6pm in Kildare Street , Dublin.

Although I have not been contacted by anyone* or any State agency since I wrote a 'permission needed'-type letter to my employer in relation to the State 'property tax' , I am aware that others have had their wage packets raided by the State Revenue , acting on behalf of the Leinster House politicians, in connection with this issue , and fully expect that the raiding party will be 'visiting' me anytime now , in an attempt to tax me for having the cheek to live in a house which took me 23 years to pay for. I know from past experience that my trade union will not get involved (except to wish me 'all the best' etc) but , really, that's for the best as 'support' from bought-and-paid-for organisations like that can give the gullible a false sense of security in that the wage-packet earner comes to rely either too much or entirely on his/her 'support base' and when - not 'if' - that base caves in , the wage-packet earner caves in with them as they don't then have the courage to stand on their own two feet.
And win or lose I'll at least have the satisfaction that I forced them to fight for the 'tax' money and, unlike others , I didn't voluntarily gift it to them. Small comfort , perhaps, but when bent politicians have power and authority in a corrupt State , ya gotta grab the small comforts wherever ya can get 'em! (*Apart, that is, from colleagues in RSF, who are in the same position as myself re this unjust 'tax')

...'LONDON' ANY WHERE NEAR IT !
A 'Free Derry Assembly' will be held in the open air in Guildhall Square in Derry at 3pm this coming Sunday (18th August) to remind the Westminster and Stormont administrations that Derry is an Irish city and should not be declared to claim the same murderous 'culture' as London - a 'culture' synonymous with murder , internment and oppression.
Don't let the Brits and their supporters shatter you : bring an Irish Tricolour with you at 3pm this Sunday to Guildhall Square in Derry and tell them to take back their 'London' , now and forever !

109TH (R)SINN FÉIN ARD FHEIS TO BE HELD ON THE SAME DATE AS A RECONVENED ARD FHEIS 27 YEARS AGO. 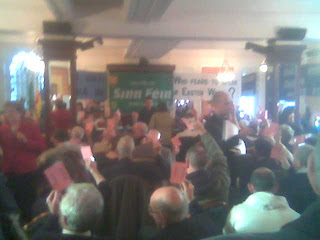 A pic from the 2012 (R)Sinn Féin Ard Fheis.
Congratulations to the Republican Movement as it prepares to hold its 109th Ard Fheis on Saturday 2nd and Sunday 3rd of November 2013 , in a Dublin venue. It won't be lost on the assembled republicans that it was on the 2nd of November 27 years ago (1986) that republican delegates reconvened the Sinn Féin Ard Fheis in a hotel in Chapelizod , Dublin, after watery nationalists masquerading as republicans finally succeeded in their endeavours to split the organisation for reasons of personal political careers. The republicans that were present that day left them to it and reconvened the Ard Fheis in a new venue. Once again , congrats to the Movement for standing by its political principles then , and now.

CARPENTERS HIT THE NAIL ON THE HEAD.....

....AND ARE ON 'TOP OF THE WORLD' WITH THEIR 'CUT' !
Enough bad puns ! But they really were delighted with their good fortune - Mick Condron , that is , and his fellow chippie , Cian G , two carpenters who were finishing a job of work in the hotel on Sunday last (11th August) and bought a ticket each from us for the raffle : Mick won the 2nd prize , €100 , with ticket number 277 and his pal , Cian G , who stuck to him like glue (!) , won our second-last prize (€20) with his ticket , number 375. The two lads , God Bless them, couldn't believe their luck , finished the unit they were building , tidied up the work area , put their tools in their van and joined us for an hour or so after the raffle and , before leaving, gave us their addresses and twenty Euro and asked that we post ten tickets for the September raffle to them ! Done and dusted (!) , lads - thank you!
Before all the above happened , Viv Doyle was being chatted-up by one of our regular sellers , Jimmy B who, amongst other things, eventually sold her a raffle ticket and , as a result , may be about to get a 'result' himself - Viv won our first prize , €200 , on ticket 394 , and Jim insisted on presenting the envelope to her personally , which further made Viv's day. And again , we believe, addresses were exchanged ;-) !
Our 3rd prize , €40, was won by Darren (ticket number 200), a young lad from Dublin who was delighted to have an extra few bob (as was his girlfriend!) and he pulled out our fourth prize winner (€20,number 406), Seán Ó , who bought his ticket from our Andy. Our bus driver , Anto, sold one of his batch of tickets to a 'TB' , who won fifth prize (€20)with ticket 021 and 'TB' then pulled out our sixth prize , worth €20, which was won by Mark from the nearby GAA Club , ticket 047. The last prize , €20, was won by Alex M with ticket 412 , which he bought from Gavin. As usual , we had a busy and financially productive afternoon/evening in the hotel , doing battle with the sport on the televisions in the premises , as Leeds and Manchester City and Man Utd and Coventry and some other teams were trying to spoil things for us - but didn't succeed! CABHAIR had the best 'team' on the day !
Thanks for reading, Sharon.