'THERE WILL BE ANOTHER DAY.....' By Peadar O'Donnell ; first published in January 1963.
Colonel Moore and I got a lot of voluntary help from the many people with secretarial experience who were in and out of my home , and he went through the local papers which came weekly, on an exchange basis, to 'An Phoblacht' and he took notice of every friendly voice relayed to us through them.
I got him secretarial help and he quickly developed a countrywide correspondence. He joined the Fianna Fáil party and made his way on to the party executive , I think : he had easy access to de Valera who was impressed by the case he made on the legal aspect of the annuity issue - it helped Moore with de Valera that his views were endorsed by George Gavan Duffy.
It was clear both to Moore and me that it would greatly help us in the countryside if we could bring Fianna Fáil TD's onto our platform there ; Galway was our best prospect and Father Fahy undertook to organise such a meeting for us. He was frendly with Frank Fahy , one of the Fianna Fáil TD's for Galway , and was soon able to write me that Fahy and Hugo Flynn TD (Cork City) would be willing to speak if we could clear the matter for them with their bosses in Dublin. Colonel Moore undertook this task and he was soon back to me with a problem - would I stand aside and leave the meeting at Loughrea to Fianna Fáil people, including the Chairman of the County Council, Eamonn Corbett, as I was so openly a champion of the 'No Rent' campaign that it would be easier for Fianna Fáil to adventure into the country districts on its own. I would not. (MORE LATER).

By Michael O'Higgins and John Waters. From 'Magill Magazine' , October 1988.
From Hambros Bank, at the end of the square, police constable Albert Viagas of the Gibraltar police also observed the man getting out of the white Renault. There were a number of other officers with Viagas in the bank and a discussion took place about whether or not the man in the car was Seán Savage. Before he got out of the car they had noticed him fiddling with something beside the drivers seat , then he got out , locked the driver's door and went southwards via Referendum Gates.
PC Viagas had two cameras mounted on tripods in the bank and took a photograph of the man. A field officer in the surveillance team was detailed to attempt to get up close to the man and establish if it was indeed Seán Savage and, after a few minutes, he reported back that it was not. Only very sketchy details emerged at the inquest as to the movements of the man from the white Renault over the next hour and a half ; a number of officers gave evidence of having tailed him during this time, but it appears to have been about 2pm when he was first positively identified.
'Officer H' , of the British security forces, told of seeing the man who parked the Renault car passing back through the assembly area, past the Anglican Cathedral on Line Wall Road and up to the tourist office. 'Officer H' was standing in the vicinity of the cathedral and identified Seán Savage as he passed. After leaving the tourist office, Seán Savage headed towards the Piazza , which is a large square in the centre of the town , linking Main Street and Line Wall Road. 'Officer H' noticed that he was employing what he identified as "anti-surveillance techniques" ie he had bought a newspaper and appeared to be using it to conceal the fact that he was looking around him. (MORE LATER). 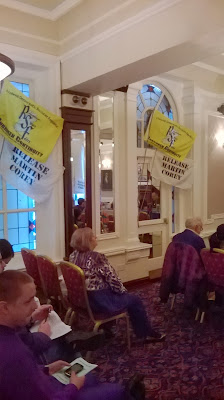 'Release Martin Corey' flags were placed in prominent position in the Ard Fheis venue.
With 114 resolutions to be discussed in a two-day period by RSF delegates from Ireland , England , America and elsewhere , and other business to be conducted as well , it was a fast-paced and concise Ard Fheis , extremely well co-ordinated by the various committees that were picked by the delegates at various stages throughout the two days. 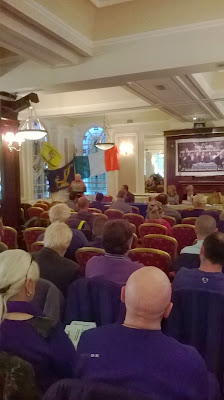 Sunday morning (10am)and a delegate addresses a point made in the Clár.
The absence of two leading lights of Irish republicanism , Ruairí Ó Brádaigh and Joe O Neill (linked forever) , amongst other fine colleagues who no longer share this Earth with us, was remarked upon more than once and, indeed , a presentation was made to Ruairí's wife , Patsy, by RSF President Des Dalton -
Patsy Ó Brádaigh and Des Dalton , Sunday 3rd November 2013.
- and other comrades who have died over the last twelve months were mentioned , and a brief history of each such person was read out to the Ard Fheis. The 2014 RSF calendar features Ruairí on the cover and his image has also been preserved on items of clothing : 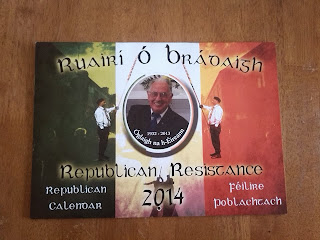 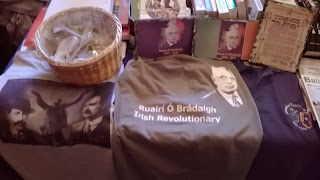 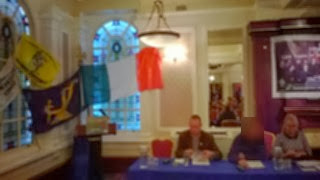 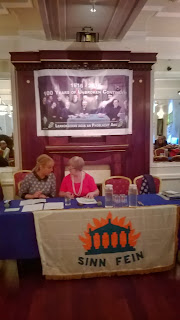 Cait Trainor (Armagh) and Mary Ward (Donegal) at the RSF Ard Fheis , 2013.
There was an incident on Sunday just before lunch time when a group of about eight members of a small disreputable group began picketing outside the venue , "seeking justice" for those amongst them who had recently been expelled from RSF for misconduct. Ironically , the 'constitution' of that group states that it, too, would expel such miscreants but, apparently, a republican organisation should not do so! However , after about an hour-and-a-half they retired to a near-by pub to toast their 'success', no doubt....
Another disreputable group was also discussed at the Ard Fheis ,in that their complete absence was noted : for the first time that any of the delegates could recall, there was no special branch presence either outside the hotel or inside it. It's as if they realised that there was no need for two anti-republican groups to be present....
A full report on the Ard Fheis will be published in the December 2013 issue of 'Saoirse' , which goes to print on Wednesday 4th of that month.
BRITISH SOLDIERS RECRUITED IN IRELAND. 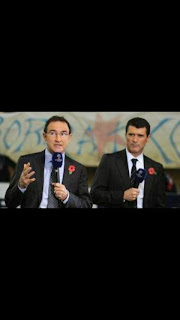 'Irish football bosses' show their true colours....
Bad enough to see the Brits and wannabe-Brits that appear on BBC television and UTV etc pay homage to British imperialism by wearing a poppy without having to witness 'our own' follow suit and, even though I don't follow or support football or rugby teams and normally wouldn't be interested in what team managers or players get up to either on or off the pitch, this is different. Victims of British jingoism are more to be pitied than admired.
This symbol of Brit imperialism is distributed by the 'Royal British Legion' (assisted by its associated organisations) in 'honour' of and support for all British military service personal who served in all conflicts since 1945 , that is all current and former members of the British Army, sailors , air men etc , including those amongst them who are responsible for all the atrocities that have been perpetrated in Ireland and that are still being perpetrated here in the name of 'the Empire'.
Misguided Irish people will tell you that they wear a poppy to remember the Irish soldiers who died in 'World War One' but such killings never actually happened : no Irish soldiers died in that conflict but ,unfortunately, tens of thousands of British soldiers, recruited in Ireland , did loose their young lives in that terrible conflict. We would do better to remember the many Irish soldiers who did die at the time of that conflict - they died in Ireland, fighting the British army. Lest we forget.
Anyway : I was going to post about the fact that all the following poppy-wearing teams are playing against each other this coming Sunday , 10th November 2013 - Tottenham v Newcastle , Sunderland v Manchester City , Manchester United v Arsenal and Swansea v Stoke and there are probably some other matches that I'm forgetting to mention but I think they're the main ones but, as far as I'm concerned, the main event taking place on that Sunday is the 650-ticket raffle that the Republican Movement will be holding in the usual Kildare/Dublin border venue , the results of which I will post here as soon as I calm. down. and. try. to. ignore. the. red. splodges. in. front. of. my. eyes...... 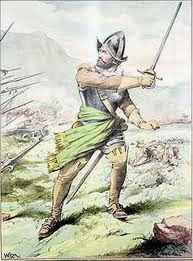 Eoghan Ruadh O’Neill : "We thought you would not die ,we were sure you would not go, and leave us in our utmost need to Cromwell’s cruel blow..."
Eoghan Ruadh O'Neill (Owen Roe O'Neill), a seventeenth-century Irish soldier , son of Art O'Neill and younger brother of Hugh O'Neill, died on 6th November 1649 in Cloughoughter Castle in County Cavan , at the age of 59. His mother was born into the O'Raghallaigh clan in that county.
Eoghan Ruadh was considered by Charles I of England to be a loyal subject and soldier but, at 37 years of age he petitioned the Spanish monarchy to invade Ireland and called for Ireland to be placed under Spanish protection , but nothing came of his endeavours. However , he maintained his opposition to the English presence in Ireland and , in 1642, at the age of 52, he arrived back in Ireland with 300 soldiers to play his part in the Rising that was then one year old. He sought to overturn the 'Ulster Plantation' and return the lands to those that had been evicted by the English. In August 1649 , Oliver Cromwell landed in Ireland , supported by at least 20,000 armed men, prompting O'Neill to join forces with the Earl of Ormond to fight for Irish ways but O'Neill died shortly afterwards, apparently poisoned.
Thomas Davis wrote the following Lament for Eoghan Ruadh O'Neill :
Did they dare, did they dare, to slay Eoghan Ruadh O’Neill?
Yes, they slew with poison him they feared to meet with steel.
May God wither up their hearts! May their blood cease to flow,
May they walk in living death, who poisoned Eoghan Ruadh.

Though it break my heart to hear, say again the bitter words.
From Derry, against Cromwell, he marched to measure swords:
But the weapon of the Sassanach met him on his way.
And he died at Cloch Uachtar, upon St. Leonard’s day.

Sagest in the council was he, kindest in the hall,
Sure we never won a battle—’twas Eoghan won them all.
Had he lived—had he lived—our dear country had been free:
But he’s dead, but he’s dead, and ’tis slaves we’ll ever be.

O’Farrell and Clanricarde, Preston and Red Hugh,
Audley and MacMahon—ye valiant, wise and true:
But—what are ye all to our darling who is gone?
The Rudder of our Ship was he, our Castle’s corner stone.

Wail, wail him through the Island! Weep, weep for our pride!
Would that on the battlefield our gallant chief had died!
Weep the Victor of Beinn Burb—weep him, young and old:
Weep for him, ye women—your beautiful lies cold!

We thought you would not die—we were sure you would not go,
And leave us in our utmost need to Cromwell’s cruel blow—
Sheep without a shepherd, when the snow shuts out the sky—
O! why did you leave us, Eoghan? Why did you die?

Soft as woman’s was your voice, O’Neill! bright was your eye,
O! why did you leave us, Eoghan? Why did you die?
Your troubles are all over, you’re at rest with God on high,
But we’re slaves, and we’re orphans, Eoghan!—why did you die?

It is from that spirit that Irish republicans take heart - knowing that even though we have lost 'fights' in the past, the 'battle' itself is not yet over.....
Thanks for reading , Sharon.