'THERE WILL BE ANOTHER DAY.....' By Peadar O'Donnell ; first published in January 1963.
In January 1927 , Paddy Hogan was asked in the Dáil to state the number of writs issued by the courts in favour of the Land Commission for arrears during the past twelve months - he refused to give it. I wrote County Councillors who were known to me personally asking them to shift the emphasis of attack from the defaulting annuitants on to the government , for deducting the arrears from grants to local Councils.
Dublin County Council was the first to protest against being forced to burden the rates in this way , and Leitrim and Cavan followed. In December 1927 , it looked as if the storm would soon break over the townlands around Dungloe : a whole spate of decrees came from the local court and these were followed by notices over the name of the solicitor to the Land Commission , warning tenants that unless the amounts stated in the notices were paid at once, the holdings would be put up for sale. Croveigh , Donegal, was singled out especially for such notices - every house in the townland got one. This was the sort of threat that made bonfires.
On December 17th , 1927, 'An Phoblacht' carried a report on Croveigh.....(MORE LATER).
THE WRONG ARM OF THE LAW......

Roisin McConnell claims she was abused, called "a murdering bitch" , "Satan" and "the Devil". She claims gardai told her that her child would be taken away, that her husband was having an affair, that she would "do seven years in jail" and that she was "going to get stabbed". A named garda told her that when this happened, he would spit on her grave, she says.
By Sandra Mara. From 'Magill' Annual 2002.
On a number of other occasions , Mark McConnell was attacked : one such incident occurred when, while he was playing in a band at a local nightclub, he was assaulted by a female member of the Barron family and her boyfriend. They were later charged, pleaded guilty and were bound to the peace.
In an astonishing development, 'Magill' magazine has learned that, following the hit-and-run on Richie Barron, a local couple who witnessed a car driven at high speed on the night of Barron's death came forward at the time and gave statements to the gardai. The couple clearly identified and named the driver of the car, which was reported stolen and was found burned out. Despite this eye-witness evidence, which counsel for the McBreartys told the court had "been suppressed" , the McConnells and their extended family have been subjected to years of harrassment and abuse.
It is understood that the statements given by this couple were never disclosed to the McBrearty's legal team and have only recently come to light.(MORE LATER).
REPUBLICAN MOVEMENT EASTER COMMEMORATIONS 2013. 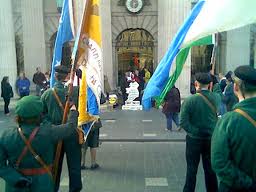 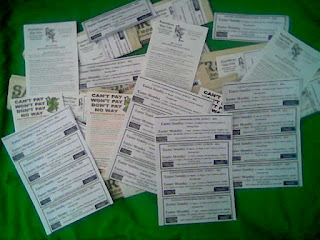 A selection of the leaflets which will be distributed in Dublin at the GPO on Easter Monday 2013.
- these leaflets will be distributed in 'packs' of four (ie 400 leaflet 'packs') and will be handed out between 1.30 pm and 3pm in O'Connell Street in Dublin. If you are in the area at that time, please take a 'pack' and, if you can, attend the Easter Commemoration at the GPO at 2pm or join the parade at 1.45pm from the Garden of Remembrance to the GPO.
13TH MARCH 1923 - 13TH MARCH 2013:
"AND NOW YOU THREE - WE'LL HONOUR THEE
AND YOUR MEMORIES SHALL NOT FADE..... 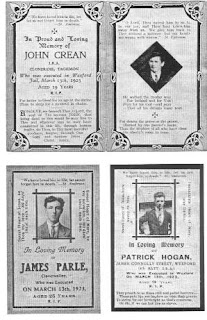 ....SINCE T'WAS YOUR LOT - IN THE REBEL PLOT
YOUR BODIES TO BE LAID."
On March 13 , 1923 , three Wexford IRA men that were being held captive by Free State forces : James Parle (of Clovervalley, Taghmon), John Creane (of Clonerane, Taghmon) and Patrick Hogan (of William Street, Wexford, (having been 'arrested' on the 15th February 1923 for possession of firearms and imprisoned in Wexford Jail) were blindfolded by their captors and taken out to the courtyard of the jail. The three men were accompanied to the sandbags by Fr. Patrick Walsh , who wrote about the experience here -
"It was 10.30 p.m. when some day in March '23 when, about to retire for the night ('fortified' by some drug or another, and feeling anything but well,) soldiers brought me the message. I first had to go to Caro to ask the C.C. to take my place next day as celebrant of a Requiem Mass for somebody in Taghmon. After trouble with lights of my motor I started thither & thence to Wexford. A cheery welcome awaited me from the three - it was about 12 midnight. They had written their last letters and their demeanour was boyish and gladsome, with something of the exaltation of those who have received some great spiritual uplifting.....
......we had a fairly long walk. Eventually we came to the side of a huge grave beside which were the 3 coffins; the wall behind was well sand-bagged 12, (or 15?) young soldiers with rifles were on one knee opposite the sandbags: We turned when near the wall & beside the grave, we turned the three blindfolded around to face the soldiers, the Wexford boy in the middle. No sound could be heard for eternity of a couple of minutes while the officer made some arrangement. I stood out at an angle to the left of the boys and in line with the soldiers: Fr. Wm. and doctor O'Connor Westgate stood similarly on their right: the boys faces wore an expression of listening to some sound in the distance: the officer made two motions with a handkerchief to the soldiers, these made two corresponding movements, and as he quickly, by a third movement, lowered the handkerchief, I was utterly stunned by the report of the rifles, and although I saw Fr. Wm. actually anointing the Wexford boy (who had dropped like a stone, having apparently got most of the bullets, being in the centre) I stood rooted to the spot where I stood for several seconds. I then realised the situation, the other two poor fellows were dying slowly: I went forward and anointed Parle while F. Wm. anointed Creane. A diminutive young officer then came forward and slowly drawing a revolver from his pocket or somewhere, calmly fired twice into the ear of Parle, then turned and looked at Creane, stepped slowly across, did exactly the same for him, and all was over...."
But all was not "over" then , nor is it now : the Irish Republic that those men (and others) gave their lives for has yet to be re-won , having been subverted by Westminster and their paid supporters in this country. Thankfully, there are people today of the same high moral caliber as James Parle , John Creane and Patrick Hogan and they will see this age-old campaign to a just conclusion.
GET THE 'POINT' YET ?

What have Luke Flanagan and Chris Huhne got in common ?
ANSWER : a shared arrogance.
But in Mr Flanagan's case, it's an ignorant arrogance : he has for months now being complaining at corruption within the State Gardaí in relation to the manner in which driving licence penalty points are scrapped for some 'by discretion', but not for others, whilst knowing all along that he himself had taken advantage of that scenario, by claiming to be immune from any driving charges as he was driving to/from Leinster House at the time of the offence. Mr Flanagan is simply guilty of 'playing the system' and while, in my opinion, he is morally wrong to do so, that does not take from the fact that it is the (political) system itself that is at fault for allowing a section of society a dangerous and unfair advantage. And that is what this corrupt State is all about - one law for 'them' and a different one for us. He has become as corrupt as the system he supports and works within.
CONGRATS , FRANCIE , IN YOUR ENDEAVOURS TO "WORK AN EXECUTIVE."

Another massive step on the road to reunification, to be sure : one pro-British ex-republican has been replaced by another.
In his 'victory' speech , Mr Molloy stated - "Republicans are prepared to work an executive.We are really prepared to administer British rule in Ireland for the foreseeable future. The very principle of partition is accepted, and if unionists had had that in the 1920s they would have been laughing."
Well...that's not actually what he said on that occasion, but it is what he meant. The man is at least a half-honest politician , in that he will say what's on his mind but then deny having done so. The perfect man to fill Martin's seat !
THE DARREN AND ANTO SHOW.....

Roscommon lads were slagging anyone in Meath colours and Dublin lads were winding-up the Kildare fans and, in between, all concerned took time out to either cheer-on or slag the Liverpool, Spurs , Manchester United and/or Chelsea teams that were playing against each other or were due to do so later on that day - and the hotel was buzzing with Mammies out for the day. Plus the usual crowd were in and we had our usual complement of helpers for the raffle , for which we required at least one table as a base from which to work - and a big 'GRMA' to Stephen, the head barperson that day, for somehow getting two tables for us : much appreciated (and sure it was only Spurs fans you moved for us!).
We got going a wee bit later than usual , due to the hectic situation that was going on all around us , and even though we had sold our supply of forty tickets within fifteen minutes of entering the premises we had to wait for half time in whatever match it was (!) that was taking place at the time. But it was certainly worth the wait for two of our punters, Anto and Darren - between them, they walked away with five of the eight prizes and, even allowing for the fact that all prizes are picked out from the raffle drum by different people, that was some feat. Stephen pulled the first prize , €200, and the winner was 'Mousey H' , ticket number 511, who had bought the ticket from Anto so, as usual, we asked that winner to pull out the second ticket - and a lovely young lady from Kildare, Saoirse , won €100 on ticket 281 , having got the ticket from Darren.
Our third prize , €40, was won by Liverpool supporter Reese K, ticket 52, who had bought it from Kildare supporter Gavin and Reese then pulled out ticket 191 as our fourth prize (€20), which was won by Linda (a Meath fan!), and it was sold to her by Darren. Linda , God bless her, gave an 'outsider' a prize when she pulled ticket 522, which went to Christy B, a Dub supporter, who had bought it from our Damo, another Dub supporter! But Christy soon got the 'Darren and Anto Show' back on the road with our sixth prize : €20 went to 'The Roscommon Ant', who was the holder of ticket 38, having got it from...Anto! And I almost lost my bearings (and my glass of 'lemonade'!) after 'The Ant' pulled out our second-last prize (€20) - Darren himself was the winner , ticket 489, having bought the ticket from....Anto!
But fair play to Darren - we got him to pull the last prize , €20, and he was generous : Seán G , ticket number 384, was our last winner, courtesy of regular seller 'D2'. And neither Darren or Anto knew him !
Now I could write the same amount of words about the treat we girls had in the hotel spa and leisure facilities after we had tidied-up when the raffle finished, but I suppose I better not - this is, after all, a raffle report, not a 'TripAdvisor'-type post, so I'll just say this : 'Mother's Day' next year will not be our next encounter with those facilities. We enjoyed the meal and two hours of pure bliss so much that we booked appointments for the end of March. And I won't be reporting on it here or anywhere else ;-) !
Thanks for reading, Sharon.