Colonel Moore's case was a simple one : 'The Government of Ireland Act 1920' gave over the land annuities to the six and twenty-six county governments contemplated in that 'Act' , and Britain undertook to service Irish land purchase stock. The Treaty could amend that 'Act' , in this matter , only if some clause in it said so directly. Article 5 of the Treaty could , perhaps, be pleaded towards this end, for it declared that Ireland must bear her fair share of the British "Public Debt" . The phrase in the '1920 Act' was "Imperial Liability" and it was broken down into its items, among which was listed Irish Land Purchase Stock. The term "Public Debt" was not taken to pieces in the same way, but it could easily be stretched to cover the items in 'Imperial Liability' and therefore bring Land Annuities on to the conference table once more.
But there was no need to speculate on the range of 'Public Debt' for in November 1925 WT Cosgrave , Kevin O'Higgins and Ernest Blythe (all three pictured here) came romping back from London with a message of joy for the Irish people - Hallelujah!! 'Article 5' of the Treaty was wiped out. But there was a footnote to the good news - a matter of £5,000,000 a year to Britain , but this did not derive from 'Article 5' but from , sort of, person-to-person money transactions between the two countries, so they said. The details would be given later....
These were worked out by Winston Churchill and Ernest Blythe in March 1926 but only made public in November of that year when they came before the 'Dail' as "Heads for An Ultimate Financial Settlement" . Under the first 'Head' , the Free State government undertook to pay Britain the full amount of the land annuities , £3,996,000 , without deduction on account of income tax or for collection and under the second 'Head' to pay £550,000 refund of income tax withheld over the years since since 1922. And there was a third item of £134,000 which was also related to land annuities. (MORE LATER).


THE ANATOMY OF AN AFTERNOON : THE STORY OF THE GIBRALTAR KILLINGS........

By Michael O'Higgins and John Waters. From 'Magill Magazine' , October 1988.
Whatever about the tactical aspects , the certificates did conceal from the inquest large amounts of information about the events of Sunday March 6th , 1988 and, more particularly, the chain of events leading up to that weekend. What emerged about developments on Friday March 4 and Saturday March 5 was sketchy at best and practically nothing was learned about the sequence of events before that which led up to the killings.
What we were allowed to know is the following : sometime before Friday March 4 , a number of SAS soldiers and MI5 surveillance officers arrived in Gibraltar for what would be termed 'Operation Flavius'. These included SAS soldiers A-F , the bomb expert 'Soldier G' , surveilliance officers H-M and an undisclosed number of others who were not directly involved in or witness to the killings - other SAS soldiers and perhaps officers , other surveillance people and possibly bomb disposal people other than 'Soldier G'.
These were in Gibraltar on the instructions of the British Ministry of Defence who were responding to an official request for assistance by the Gibraltar Commissioner of Police , Joseph Canepa , who in turn was acting on information received from British intelligence sources about a proposed IRA bomb assault on Gibraltar. (MORE LATER). Robert Emmet's 'Death Mask'.
First - apologises for the 'tabloid-style' headline , but I knew it would draw you in!
Whilst the location of Emmet's grave remains unknown , the piece we posted on this blog last June in connection with same has apparently become very well known , as we have had inquiries from New Zealand , Canada , Australia and closer to home from readers asking , amongst other things, if we could email them a copy of the letter which IRA Veteran Joe Doolan wrote about the subject 47 years ago. We couldn't do so , because the PDF in which we received those pages was embedded with information which would have identified the person who sent it to us but we have since 'cleaned up' that part of the file without doing any damage or making any changes to the essence of the pages concerned. Those pages are now fully readable in a 'click-to-enlarge' format and you can access same here , here , here and here.
We may be getting more material of that nature - not necessarily in connection with Robert Emmet - and, if we do , and if we can safely do so, we will publish same here.


FOOD , GLORIOUS FOOD. BUT NOT IN THE LEINSTER HOUSE RESTAURANT.... .....and tastes even better when it's the taxpayer that foots the bill !
He fought an underhanded battle for years to change a revolutionary movement into a constitutional political party and one of the first actions he went public with was when he and other like-minded wannabe political careerists manoeuvred similar people into positions of influence within the movement and voted in favour of entering Leinster House , thus expelling themselves from the organisation, as per the rules and constitution of same. And now , it appears, he doesn't want to be there at all. One of our moles in that soiled institution delved a little deeper (!) and discovered that , although the missing man in question enjoys pocketing the stuff , he doesn't like spending it preferring, instead, to dine with other members of the 'Ulster Establishment' in the other soiled political institution in Ireland, also 'gifted' to us by the British , and also subsidised by the taxpayer. The Free State fry-up just doesn't taste the same..... 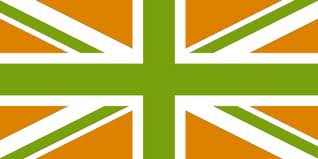 'Our' flag , as no doubt envisaged by those motor enthusiasts (!) who want to erect a monument in Cork to mark Ireland's 'connection' to the Crossely Tender vehicle....
It's only a matter of time now before some bright spark of a West-Brit seeks (and obtains) the backing of the Free State 'establishment' to erect a statue to Cromwell , with the only possible disagreement between both camps being the location - '...would opposite the GPO in O'Connell Street in Dublin be prominent enough , do you think , Charles....?'
Something not to be made fun of however , is the fact that a similar proposition appears to have gained ground and has been offered 'official' backing and is now , it seems , a 'done deal'. However : that particular part of Cork is known for its strong winds which not only shake the barley but 'tis said that if such winds were a-blowin' in Dublin at the time, Nelsons Pillar would have 'collapsed' much sooner...
You can read about the (successful?) exploits of the above-mentioned Crossely Tender-lovers here and , whilst the latest 'kite flying' ploy by those people seems to have paid off, no doubt this green , white and orange-coloured bookmaker and/or others will shortly be offering odds on how long before a strong wind rattles its way through Dublin again.... 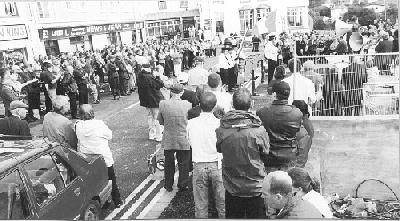 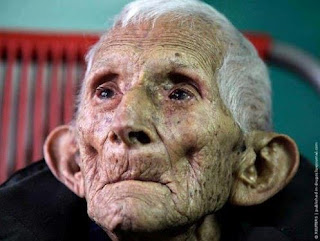 'Dark days are upon me . . . . My wife is now dead. I look at the future ... . . . . I shudder with dread.....'
About 90% of our posts on this blog are political in nature , with the balance commenting on 'social' related issues and, as such, this piece got our attention. It was sent in by one of our readers who came across it on 'Facebook' and it deserves to be highlighted and forwarded as it's an issue which we should all be concerned about. This foreword accompanied the piece -
'When an old man died in the geriatric ward of a nursing home in an Australian country town, it was believed that he had nothing left of any value. Later, when the nurses were going through his meager possessions, they found this poem. Its quality and content so impressed the staff that copies were made and distributed to every nurse in the hospital.One nurse took her copy to Melbourne. The old man's sole bequest to posterity has since appeared in the Christmas editions of magazines around the country and appearing in mags for Mental Health. A slide presentation has also been made based on his simple, but eloquent, poem.And this old man, with nothing left to give to the world, is now the author of this 'anonymous' poem winging across the Internet....'
Cranky Old Man
What do you see nurses? . . .what do you see? What are you thinking .. . when you're looking at me? A cranky old man, . . . not very wise, Uncertain of habit .. . with faraway eyes? Who dribbles his food .. . and makes no reply. When you say in a loud voice ...'I do wish you'd try!' Who seems not to notice . . .the things that you do. And forever is losing . . . a sock or a shoe? Who, resisting or not . . . lets you do as you will, With bathing and feeding . . . .the long day to fill? Is that what you're thinking?... is that what you see? Then open your eyes, nurse ... you're not looking at me. I'll tell you who I am . . . as I sit here so still, As I do at your bidding ... as I eat at your will. I'm a small child of ten . .. with a father and mother, Brothers and sisters .. . who love one another A young boy of sixteen . . . with wings on his feet Dreaming that soon now . . . a lover he'll meet. A groom soon at twenty . . . my heart gives a leap. Remembering, the vows ... that I promised to keep. At twenty-five, now . . . I have young of my own. Who need me to guide . . . and a secure happy home. A man of thirty . . . my young now grown fast, Bound to each other . . . with ties that should last. At forty, my young sons .. . have grown and are gone, But my woman is beside me . .. to see I don't mourn. At fifty, once more, ... babies play 'round my knee, Again, we know children . . . my loved one and me. Dark days are upon me . . . my wife is now dead. I look at the future ... I shudder with dread. For my young are all rearing .. . young of their own. And I think of the years . . . and the love that I've known. I'm now an old man . . . and nature is cruel. It's jest is to make old age . . .look like a fool. The body, it crumbles ... grace and vigour, depart. There is now a stone . . . where I once had a heart. But inside this old carcass ... a young man still dwells, And now and again . . . my battered heart swells I remember the joys . . . I remember the pain. And I'm loving and living . . . life over again. I think of the years, all too few . . . gone too fast. And accept the stark fact . . . that nothing can last. So open your eyes, people ... open and see. Not a cranky old man . Look closer . . . . see .. .. . .. .... . ME!!
A story of a life. I don't know if the foreward is true or not but it doesn't really matter as the subject matter itself is true , unfortunately. And the fact that it is true is also the story of life , although it shouldn't be.
Thanks for reading, Sharon.