FREE STATERS INVITE THEIR POLITICAL COUSINS TO A PARTY.

It would be unthinkable that anything in the bare pattern of the Government of Ireland Act 1920 should be accepted by Michael Collins and recommended to the people by him for acceptance ; Collins was prepared to climb down from the Republic to the low ground of Home Rule, but only for a united Ireland. He was realist enough to see that restrictions on the powers of an Irish parliament could be set aside progressively , quickly, under pressure of strong national support for the steps to undo them. ('1169...' Comment : unfortunately for the Cause of full Irish freedom and for those who pursue that nobel objective, those with a mindset like that which Collins had would soon become extremely comfortable , morally , financially and politically, in their 'restricted Irish parliament' and proved that , in order to protect their position, they would turn against their fellow Irish men and women. And THAT is the 'realism' of the situation.)
The only limitation which time and sentiment would not remedy is partition , which strengthens itself with new interests with the years. The Treaty was more like the Government of Ireland Act 1920 then Collins would have wished but he was convinced 'Clause XII' of the Treaty (Article 12) of the Treaty would remedy its great weakness , partition.
In hastily-written articles which form his book , 'The Path to Freedom' ,Collins sets out his view clearly - "North-East Ulster is about to get back into the pages of Irish history.....if they join in, the Six Counties will certainly have a generous measure of local autonomy.....if they stay out, the Boundary Commission, arranged for in 'Clause XII' , will be certain to deprive 'Ulster' of the counties Tyrone and Fermanagh. Shorn of those two counties, 'Ulster' will shrink into insignificance. Thus , union is certain." ('1169...' Comment - again , Collins was naive in not allowing for the 'comfort factor' in that those ensconced in the Free State 'parliament' would not at all welcome the addition of two (or the full six) 'extra' counties into their little fiefdom as their political careers could be on the line due to the 'new entrants' ie 'if it's not broke, don't fix it'. Their political career was paying nicely just as it is, thanks anyway...)(MORE LATER).
THE ANATOMY OF AN AFTERNOON : THE STORY OF THE GIBRALTAR KILLINGS........

By Michael O'Higgins and John Waters. From 'Magill Magazine' , October 1988.
(MORE LATER).
'Mister O' (a British intelligence operative) informed the Gibraltar authorities that if confronted, the three IRA members would be likely to use their weapons or, alternatively, use a detonating device to set off the bomb prematurely, if it was indeed radio controlled. The reason they expected a radio controlled device , 'Mister O' told the inquest , was that this would be safer from the point of view of the bombers, as it would allow them make good their escape before setting off the bomb from Spain. The possibility of a timer was considered , he said, but rejected, because of the Enniskillen experience ie they believed the IRA would be unlikely to risk repeating the high numbers of civilian casualties which resulted from the use of a timer device on that occasion.
The car, according to 'Mister O' , would most likely be driven onto the Rock on the Monday night or Tuesday morning prior to the changing of the guard ceremony. They considered briefly the possibility that the car would be driven in on the Sunday but dismissed it as "unlikely" , and also discounted the possibility that the IRA ASU might use a 'blocking car' ie a car with no bomb used to reserve a parking place in the assembly area , to be replaced with the real car bomb at some point closer to the parade. This , they thought, would be "an over-complicated and unnecessary procedure" .
'Mister O' did not speak directly to any of the personnel involved in the actual operation , not even to the Police Commissioner, but briefed his own representative who in turn briefed the Commissioner and the others. 'Mister O's representative was not a witness at the inquest , and it was on the basis of 'Mister O's intelligence reports ('1169...' [short] Comment - (!)...) that Police Commissioner Canepa first made the decision to request back-up from the British Ministry of Defence : the expected operation was such , he decided , that the largely unarmed Gibraltar police would be incapable of dealing with it , and in response to his request , the SAS were sent to Gibraltar. (MORE LATER).

ORANGEVILLE TWO - FOR THOSE WHO THOUGHT IT COULDN'T GET ANY WORSE....

An armed guard of pro-British paramilitary 'police force' is sometimes a required prerequisite in British-occupied Ireland before children can reach their school.
An anti-Irish loyalist gun-gang in the six occupied counties of Ireland , which claims it operates on a political level, has stated , on Friday 6th September 2013, its intention to take "military action" against school children in Belfast. The group , the 'Red Hand Defenders' (considered by most commentators to be a 'Kitsonian' group established in Ireland by the British) are known to be motivated more by religion than politics and consider all not of their 'faith', especially Catholics, to be "legitimate targets". If Irish republicans had made a similar threat against schoolchildren and their parents the issue would have received much more publicity than it has and republican leaders would have been loudly and repeatedly called on to see to it that the threat was withdrawn , but because to do so now would highlight the fact that the 1998 'Peace Treaty' (the Stormont Treaty) has , to all intent and purpose, failed *, this subject will be brushed under the carpet as silently and as quickly as possible. To expose this continuing sectarian attitude on the part of some of the minority in Ireland who consider themselves to be 'British citizens' would further raise the issue of 'solutions to the problem' and would give succor to the Irish republican answer regarding that issue - that of a complete British military and political withdrawal from all of Ireland. How many more children have to be threatened before the truth in that answer is realised ? (* except , that is, for those who have forged well-paid political careers out of that 'failed answer'.) 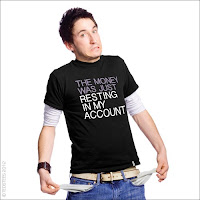 " It's NOT a fair cop....."
We have mentioned instances of this light-fingered behaviour before (see '€17,000 Not Left Untouched : €13,000 And Counting (Down).....' , here) and feel it is our duty to keep you up-dated on recent developments re Garda stations and crime-scene money being held within same, although a 'senior Garda officer' seems to be of the opinion that we can all move along regarding this incident , as there is nothing to see here - "At this stage it is not yet clear whether the money has been stolen or mislaid and searches are being carried out to determine if it could have been moved and lodged elsewhere..." . At a guess , we would say that it definitely has been "lodged elsewhere" ! The "it" in question is said to be a sum of money , to the value of €4,000 which , apparently , has been 'mislaid' on the premises (or perhaps 'mislaid' in another premises!) , much like the €9,000 that was 'mislaid' in Balbriggan Garda barracks and a total (to date!) of €27,000 'mislaid' between Malahide barracks and Coolock barracks , both of which are located in Dublin.
This blog is of the opinion that all such money should not be kept in a Garda barracks - any Garda barracks - and would be much safer in a bank. At least that way , people with a longer track record of 'misplacing' other people's money could show the Gardaí how it's done properly....

WELCOME TO THE (CONSTITUTIONAL) REVOLUTION. 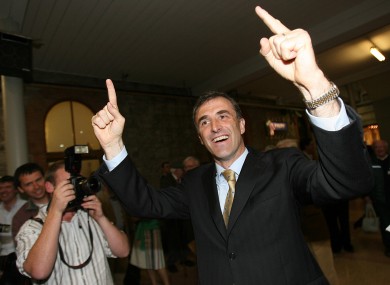 Chris Andrews who, on the one hand, left a constitutional nationalist political party and, on the other hand, joined a different constitutional nationalist political party.
This has , by all accounts, sent political shock-waves through the 'Establishment' here in this State , as Mr. Andrews hails from a very respected (by the State 'Establishment', that is) Fianna Fail background and would have been , at one time, considered to be 'Top Table' material. So much so, in fact, that when, last year, a Fianna Fail 'insider with good contacts' was tweeting comments attacking his(/her) own party leadership , the name 'Chris Andrews' never surfaced as a likely candidate. In August that year (2012) , he and Fianna Fail parted company , and he used that same Twitter account to have a pop at the party he is now a member of - Provisional Sinn Féin :
Tweets from @brianformerff, later identified as Fianna Fail Leinster House member Chris Andrews:
Friday, Mar 23, 3.12pm @MaryLouMcDonald Hard to take SF/Adams lecturing Bertie on being corrupt after all they have done!! Keep out of it. #mahon
Thursday, Mar 29, 11am [twitter handle deleted] I agree with a lot of your views but given what SF has done to innocent people its a bit much listening to you pontificate.
11.01am [twitter handle deleted] Was it not corrupt to bury mother of 10 Jean Mc Conville. Is that acceptable to you. Selective outrage i thinks!!
11.03am [twitter handle deleted] What about the ink cartridges! was that okay? Hard to take SF being moralistic!! Its not their thing!
1.43pm [twitter handle deleted] knows all about killing given the amount of people Sinn Féin Reps killed over the years. #jeanmcconville
Wednesday, Apr 18, 12.39pm [twitter handle deleted] Ordinary working class people who have guns stuck in their face by your friends. they are the ones terrorised.
The "ink cartridge" comment was in relation to Aengus Ó Snodaigh's fondness for the black-stuff but Aengus knows it's 'only politics' and didn't hold a grudge - he used his own Twitter account to welcome his new colleague into the folded party fold although , as you can see, not all respondents spared the ink in reply! Anyway - Mr. Andrews is bound to feel at home in his new party just as surely as Tweedledee would feel as comfortable if he 'morphed' into.....Tweedledee. And if some existing members don't like it , their Boss will purchase their 'support' by telling the 'house rebels' that Andrews membership 'will bring in more cash'. Well , we all have bills to pay....

FREE STATERS INVITE THEIR POLITICAL COUSINS TO A PARTY. 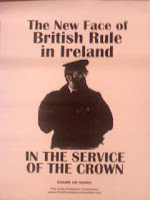 It could only happen in a partial ex-colony in which the 'leaders' are smitten - mentally, morally, and emotionally - by their (old?) imperial bosses , whom they have an overwhelming desire to impress. It excites them to do so, and allows them to consider themselves to be 'every bit as good' as those that once spat down on them from the 'big house'.
The State 'Establishment' have issued invites to the British 'royal family' , the British government and Six County (and Free State) loyalists to stand side-by-side with them at the GPO in Dublin at Easter 2016 - the centenary of the 1916 Rising - to 'celebrate' what Free State Foreign Minister Eamon Gilmore has called "a dual history". If this goes ahead as planned by Mr. Gilmore and his careerist colleagues and is deemed by them to be a 'success', this blog can EXCLUSIVELY REVEAL!!! that 'Leinster House Productions' (LHP) , a Dublin-based 'not for profit' fit-up theatre company which specialises in comedy and farce, will establish a subsidiary company , 'Póg Mo Thóin Productions' , to sell the concept to , for instance, the French , in that 'PMT Productions' could assist the Palais Bourbon to hold State commemorations for the Vichy forces and their comrades who collaborated assisted the visiting German tourists who insisted on staying there.
Scholars amongst our readers (and we have LOADS!) will of course notice the link between the British 'royal family' and the Germans. Those struggling to make that connection should contact 'LHP' for advice. Make sure you leave your wallet/purse, and your principles, at home.