Garda to appear in court on assault charges this month. By Liz Walsh, from 'Magill' magazine, October 1998.
A former garda is due in court later this month, charged with assaulting a prisoner in his custody in the Bridewell Garda Station in Dublin last February. The 25-year-old garda was on probation when the alleged assault took place - he was dismissed from the force on 10th September and will appear in Dublin District Court on 28th October. According to an informed source, the garda was observed by two prison officers, allegedly beating the prisoner in a cell in the Bridewell station. The prisoner was being held there while waiting to appear in the nearby district court on charges.
The two prison officers reported the incident to the garda authorities who then began a criminal investigation. This resulted in the probationary garda being charged with assault and, according to sources close to the case, the alleged victim is considering taking a civil action for damages against the individual garda and the garda authorities.
Meanwhile, an internal garda investigation is underway into the recent death of a man in custody in Tallaght garda station : 24-year-old Francis Brooks from Fettercairn in Tallaght was arrested in a stolen car on 18th September and was placed in a cell in Tallaght Garda Station where he was found dead some hours later. The garda authorities are awaiting the results of the post-mortem and, in the interim, they appointed Detective Superintendent Cormac Gordon from Fitzgibbon Street to investigate the circumstances surrounding the death. (MORE LATER).

By Michael O'Higgins and John Waters. From 'Magill Magazine' , October 1988.
Gibraltar is a very small town. Carmen Proetta's stepbrother is the Police Commissioner. Stephen Bullock, a lawyer, was one of the main eyewitnesses and the firm he is employed by was retained by Kenneth Asquez to represent him when he took the stand to retract his alleged eyewitness account. As with a lot of other small towns its people do not have much time for the niceties of law.
The official from the coroner's office may well have fingered a pulse when he distinguished between the moral and legal position outlined in the quote by Cardinal Hume. Most Gibraltarians welcomed the verdict.
The taxi driver who drove a 'Magill' reporter to the frontier was delighted with the verdict and, asked why, if there had been an intention only to make arrests, Seán Savage had been shot sixteen times, he replied - "Probably because the soldier who shot him ran out of bullets". [END of 'THE ANATOMY OF AN AFTERNOON : THE STORY OF THE GIBRALTAR KILLINGS' . NEXT - 'THE IRA' , FROM 'MAGILL' , 1980.]

ON THIS DATE (3RD DECEMBER) 93 YEARS AGO : TRUCE AND TREATY AND THE PARTING OF THE WAYS.

Cork IRA Volunteers, pictured in the 1920's : it was men like these, and the organisation and objective they fought for, that Westminster wanted to kill.
'In November 1920 two soldiers from the Essex Regiment dressed in civilian clothes were arrested by the I.R.A. in West Cork. The pair claimed they were deserters who wanted help to get back to Britain. One of the soldiers claimed that his brother was a sergeant in the Essex Regiment stationed at Bandon Barracks who was also eager to desert and would be willing to supply intelligence information which could be useful for a raid on the barracks. When arrangements were made for three I.R.A. officers, Captain John Galvin, Lieutenant Jim Donohue and Section-Commander Joe Begley to meet this sergeant on December 3rd they were surprised by soldiers from the Essex regiment and shot dead. According to the local I.R.A. leader Tom Barry his comrades had been killed in a trap which the two deserters had set- "Of course, the two pseudo-deserters were spies. Acting under instructions to treat them as such, their I.R.A. escort had lodged them under guard, not in friendly houses but in British loyalist homes. Despite the vigilance of the guards , one of them dropped a note giving the particulars of the Brigade Column Commander’s appointment near Bandon. This was conveyed by the loyalists to the enemy and hence the deaths of the three Bandon Volunteers. Some time after the two British spies were brought to Kilbree, Clonakilty and there they were executed...." (from here.)
In his book 'Guerrilla Days in Ireland', Tom Barry says he interviewed the two British Army 'deserters' on the 25th November 1920 as he, and his IRA column, wanted to get into the British barracks in Bandon and remove all the weapons. He set up the meeting with the Essex sergeant, said to be the brother of one of the 'deserters'. Barry later stated - "One of the oldest ruses in war is to send spies, posing as deserters into enemy lines. The classic example is, I think, the American Civil War, when hundreds of these pseudo-deserters were discovered as spies by both armies and dealt with as such....."
And "dealt with as such" they should be ; in those days spies,informers and turncoats had to be weeded out as they attempted to blend-in with their enemy and tried to appear to be on the same side as those they secretly conspired against. But not so today - they openly present themselves in public and, indeed, are lauded by the political establishments that employ them. We need more 'Guerrilla Days' in this whole country....

This annual republican event has been given a boost by this decision - at the time of writing, four swimmers, all sponsored, have been confirmed (subject, as usual, to a 'health check' immediately beforehand) and Mr Claus will be on site. The 'lemonade' from Donegal has already arrived and is safely tucked away in a secure storage area (!) and all seems to be shaping-up nicely. Two table loads of 'goodies' have been collected locally from the pubs and shops etc (a big 'Thank You' to Bernard and the lads and lassies for that!) and turf , logs and other firewood is being held for Cabhair in a near-by yard. We will post more updates re the swim on this blog as we receive same - if you can make it on the day you will be most welcome and if you can't get there, you might consider sponsoring one of the swimmers or simply dropping a small envelope (with a few bob in it!) into 223 Parnell Street in Dublin. Your support will be appreciated, thanks!

TOO LITTLE AND TOO LATE TO ACKNOWLEDGE THE ELEPHANT IN THE ROOM. 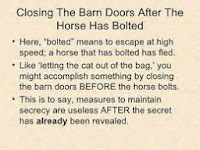 Nationalist Six County 'Policing Board' member (and one of the leaders of Provisional Sinn Féin) Gerry Kelly once again showed his 'establishment' credentials in a recent interview and, even though he didn't say anything new ("...I am not against the use of informants and I’ve never said that...of course police services operate on the basis that they gain information...(I have called for)people to bring forward information so it would be a complete contradiction for me to say I am against people giving information...whether you are a covert human intelligent source or otherwise...") , for one reason or another it proved a bridge too far for one of his fellow nationalists (and party member) Frank McGirr (Colm's brother) who stated that he was.... "...so annoyed with Gerry Kelly. I am a member of Sinn Féin no longer from today. I don’t support informers. Informers are low lives. Thirty-one years ago my youngest brother Colm was murdered by the SAS on December 4 at Clonoe and that was due to police informers..." (from here.)
Where the hell has Frank been living for the last 28 years? Kelly and his Provo teammates have been singing an anti-republican tune of one type or another, albeit sometimes in a lower key, since 1986, to such an extent that anyone with a republican pulse would know to avoid them. Perhaps in another 28 years Frank will come to the conclusion that 'Kelly's Heroes' are not, in fact, attempting to achieve the same objective that his brother died for. Perhaps...
Thanks for reading, Sharon.