"WHAT'S IN IT FOR ME?" - SHAMELESS GOMBEENS GO ON THE RECORD.

"I have a question for you Nina, I have a question for you. What's in it for me?," he asks. McElvaney goes on to say that he would be able to help and queries again, "What are you putting on the table for me...are you going to pay me by the hour or by the job?," he asks during the same conversation. After 'Nina' tells McElvaney that she's coming to Ireland he tells her to "...have plenty of Sterling with you. Ten grand would be a start...if you let me down, there'll be war.."
The above headline (link) and the paragraph following it, 'featuring' (now former) Fine Gael politician Hugh 'I-trapped-RTE-and-my-own-party' McElvaney, is just one example of how politics 'work' in this corrupt State. All Leinster House-based political parties have an endless supply of in situ and/or up-and-coming political representatives that are aware that they have, at best, on average about four years in between elections in which to feather their own nest.
There are three solutions to the political gombeen men and women that contaminate political society in this backward Free State : vote NOTA (1) and keep doing so at all elections, State and local, until such time as the political establishment concede that it is a new political system (2) that's needed, not 'new' political reps to carry-on working the present corrupt system. And this is the third solution, for those who don't wait to wait for (1) or (2) to materialise. 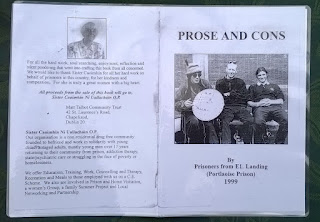 By prisoners from E1 Landing, Portlaoise Prison, 1999.
ACKNOWLEDGMENTS :
Grateful thanks to the following for their help, support, assistance and encouragement, and all those who helped with the typing and word processing over the past few months. Many thanks to Cian Sharkhin, the editor of the book, Mr Bill Donoghue, Governor, Portlaoise, Mr Seán Wynne, supervising teacher, the education unit in Portlaoise Prison and the education staff, especially Zack, Helena and Jane. Education officers Bill Carroll and Dave McDonald, Rita Kelly, writer, print unit, Arbour Hill.
First Print : November 1999, reprinted March 2000, illustrations by D O'Hare, Zack and Natasha. Photograph selection : Eamonn Kelly and Harry Melia.
CARING PERSON.
You are the one
who cares for the poor
and disadvantaged in Ballyfermot
visits the prisoners since the late 70's
bring them clothes and money
gets them jobs and flats.

Dozens never went back in again

You are the one who tried
so hard
to save so many more,

They are full of joy

You are the one who shows love
Sister Caoimhín.
John Doran.
(Next : 'Wee Kitten'. )

IS PEACE SAFE WITH ANDREWS....? 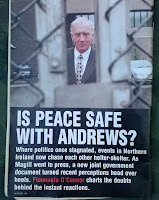 Where politics once stagnated, events in Northern Ireland now chase each other helter-skelter. As 'Magill' went to press, a new joint government document turned recent perceptions head over heels. Fionnuala O'Connor charts the doubts behind the instant reactions. From 'Magill' magazine, February 1998.
But the SDLP leader's profile in the talks process generally is curious. Like the Taoiseach's special adviser on the north, Martin Mansergh, Hume was out of the country on the crucial weekend. He has been more absent than present for much of the process to date, say participants. Dublin might well have difficulty deciding where SDLP authority now lies, other parties suggest.
"Hume can't stand this stuff now," said a former fan who hopes against hope, "I think he might be pacing himself for the final stretch." Another is glad the famously impatient SDLP leader has paid sparing visits to the talks. "He'd be climbing the walls if he was here more. You can see him deciding to switch off for the good of his health. The head goes down on the arms. I don't know if he actually sleeps."
It is of course possible that nationalist, particularly republican, discontent with Dublin and London is exaggerated as part of a general 'positioning' by all parties—gearing up as negotiation on specifics becomes unavoidable. "Everybody's posturing," said one tired politician. "Everybody's positioning at this stage." (MORE LATER.)

By Ursula Barry.
. What is there for women in Ireland to commemorate in 1916? Did the 1916 Proclamation and the subsequent 'Democratic Programme of the First Dáil' contain radical or revolutionary statements on the position of women in Irish society that were later betrayed or sold out in the process of establishing the Free State?
From 'Iris' magazine, Easter 1991.
Within 20 years of the establishment of the Free State a legislative framework had been put in place reflecting conservative and reactionary thinking with particularly serious implications for women. Women who had played a key role in both republican and workers' organisations as well as asserting their own demands for the vote were systematically excluded from public life and constrained to the private domestic sphere in both the Free State and the North.
But more than that : social life was viciously suppressed in the Free State, where literature, film, sexual expression and even dancing were the target of repressive laws. The 1920's saw the denial of the right to civil divorce, the virtual exclusion of women from jury service and the savage censorship of films and other publications.
During the 1930's the focus shifted inevitably towards sex as contraceptives were outlawed, in a piece of legislation that simultaneously penalised brother-keepers, and the 'Public Dance Halls Act' of 1935 gave district justices the power to regulate and control public dances, a move directly in line with a Catholic Church pastoral on 'the evils of modern dancing' a few years earlier and in that same year the 'Conditions of Employment Bill 1935' imposed a maximum proportion of women workers in industry and gave the State minister for labour the right to prohibit women completely. So much for equal opportunities! (MORE LATER.)


ON THIS DATE (9TH DECEMBER) 42 YEARS AGO : ANOTHER FALSE TREATY ACCEPTED BY THE FREE STATERS.

The 'Sunningdale Agreement' was an attempt in 1973 by Westminster at a 'power-sharing' arrangement between the British political establishment and Irish 'civil-right' nationalists regarding the British-occupied six north-eastern counties of Ireland. The document was signed by British PM Edward Heath and Free State 'Taoiseach' Liam Cosgrave on the 9th December 1973 at Sunningdale Park Hotel in Berkshire, England, and spawned a 'power-sharing Northern Ireland Executive' and a cross-border 'Council of Ireland', both of which were rejected by the then republican movement (but which were accepted by the UUP, the SDLP, Free State Labour Party and the Alliance Party) and, indeed, the whole set-up collapsed within a year and 'direct rule' from Westminster was imposed.
When, 25 years after Sunningdale (ie in 1998) a similar half-way-house treaty was being promoted by the political establishments in this country and England and by the Provisional organisation, the republican leadership here again spoke out about yet another bad treaty - "...the great unanswered question before history is why did Paisley on the one hand and the present Provo leadership on the other not accept and work the Sunningdale Agreement of 1973 which offered more and for which less was to be paid than the 1998 Belfast Agreement? Did we, as a people, have to endure 25 years more of sacrifice and suffering until both elements were poised to divide the major share of the spoils of office between them...when the Framework Documents were issued in 1995 (what) Irish people were facing was a repeat of Sunningdale with the Provos on board this time. Indeed, the British Prime Minister Edward Heath is reported as saying that "..the Good Friday Agreement was modelled on Sunningdale. But the present prime minister has never acknowledged that. He may even be ignorant of it for all I know. But obviously we know the people who were working out the new agreement went back over the whole of Sunningdale and more or less copied it." But the Stormont Deal was actually less than Sunningdale. The l973 Agreement provided for an evolving Council of Ireland while the 1998 accord contains the possibility of merely cross-border bodies which would be responsible to the New Stormont and cannot grow and develop without the permission of that Unionist-dominated assembly. Further, the 26-County State has paid more for the Stormont Agreement than it did for Sunningdale. Articles 2 and 3 of the 1937 Constitution were not given away in 1973; in 1998 they were and the nationalist people of the Six Occupied Counties were reduced – in the eyes of the 26-County State – to the level in rights of people with one Irish grandparent living as far away as Australia or New Zealand..."
The republican position, then as now, can be summed-up in the words of Seán MacDiarmada - "We bleed that the nation may live. I die that the nation may live. Damn your concessions, England; we want our country."


ON THIS DATE (9TH DECEMBER) 58 YEARS AGO : UNITED IRISHMEN, THE LONDON TIMES AND POLITICAL ACTORS... The following article was published in 'The United Irishman' newspaper in January 1958 - 'An article in 'The London Times' newspaper of December 9th, 1957, entitled 'Actors In The Political Scene', stated : 'The country families of the North of Ireland, after surrendering control to the captains of industry for a long period , are well established in the present government.' There, perhaps, is the key to the whole situation : the 'lords of land' and the 'barons of industry' who together make up the Tory-Unionist Ascendancy, the 'master-minds' with Britain's Tories, of the anti-freedom struggle in Ireland. These are the 'gentry' who imposed their views on the Orange rank-and-file under the guise of religion - the ones who stand to lose most by separation from Britain. It is those gentlemen who act as Britain's puppets in Ireland : even those who consider themselves as 'left-wingers' can be enticed to forget where they came from.
In a fit of pitiful pleading, David Bleakley stated : "It is an anachronism that an economically insecure Northern Ireland should exist in the midst of an industrially thriving British community. Ulster's labour force is ready, anxious and able to work its way through to prosperity. All it asks is to be given the tools and the jobs." He should have said that the whole concept of Occupied Ireland is an anachronism - that the only way we can all 'work our way through to prosperity' is by first winning vocational independence and driving British imperialism from our land. That would be wisdom but one does not expect wisdom for Ireland in the columns of 'The London Times' newspaper...'
The word 'anachronism' ('something [such as a word, an object, or an event] that is mistakenly placed in a time where it does not belong in a story, movie, etc/ a person or a thing that seems to belong to the past and not to fit in the present..') is apt when describing the continuing military and political occupation of part of Ireland by Westminster, but unfortunately it's not only in the columns of English newspapers that such wisdom is absent. We have, and always have had, our 'Times' readers here, too. 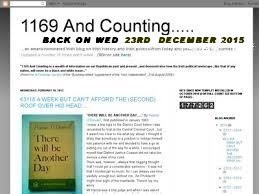 ...we won't be posting our usual contribution, and probably won't be in a position to post anything at all ; this coming weekend (Saturday/Sunday 12th/13th December 2015) is spoke for already with a 650-ticket raffle to be run for the Cabhair organisation in a venue on the Dublin/Kildare border (work on which begins on the Tuesday before the actual raffle) and the 'autopsy' into same which will take place on Monday evening 14th in RSF Head Office on Parnell Street in Dublin and then it's straight back to the preparations for the Cabhair Christmas Swim, which is the 39th successive such event. Our next 'normal' (!) post will be on Wednesday 23rd December 2015, although if anything grabs our attention between this and then we might do a 'ghoster' - but it would wannabe good!
Thanks for reading, Sharon.