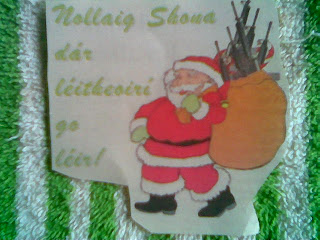 ...when we all tend to get distracted by the prevailing pressures : but some of us keep our eye on the ball as well! Almost seventy years ago , a dedicated group of Irish Volunteers went on a Christmas 'shopping spree' with a difference - "...and when he stood up straight again he saw the muzzle of a revolver pointed in his face..." " Eighty-six years ago, in December 1922, the Curragh Camp was the scene of a terrible tragedy; it was the execution, by firing squad, of seven young men in the Military Detention Barracks, now the Curragh Prison. The full story of the events of the week from 13 December 1922, when the men were arrested, to 19 December 1922, when they were executed, is not now known. All of the people involved are dead, and with them their stories. It appears that all official records of the executions have been lost or destroyed....."
(From here)

Between 17 November 1922 and 2 May 1923 , seventy-seven Republican prisoners were removed from their prison cells and shot dead by order of the Free State administration . In this post we name those 77 men and list where each man was executed and the date of same : we do so in the hope that , after the search engines have archived this information it will be retrieved by those who , like us , are of the opinion that these men should not be forgotten.

The above-listed 77 men did not take up arms in the belief that they were fighting for the establishment of a morally-corrupt so-called 'half-way-house' institution , nor did they do so to assist the British in the 'governance' of one of their 'part' colonies : that which those men and many others fought for remains to be achieved . You can help present-day Irish Republicans to achieve that aim....... 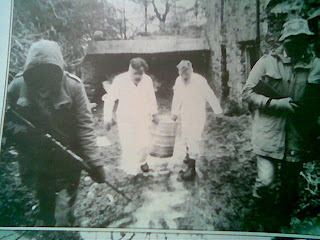 An Economic and Resistance Campaign was re-emphasised in the updated 'Eire Nua' document and a committee headed by Post Office Engineering trade unionist Paddy Bolger was set up to devise a policy for the next Ard Fheis . The Economic Resistance Campaign forsees the involvement of Sinn Fein in trade union struggles like the PAYE marches and opposition to the 'National(sic) Wage Agreement', and to push Republican issues at grass roots trade union level . It also intends to encourage housing , unemployment and social agitation by the Republican Movement .

Those two developments reflect a political change in Republican thinking that is part and parcel of the IRA's 'long war' scenario : if the IRA must stay around to fight that war , say the 'radicals' , then Sinn Fein must have something other than the initially intoxicating but in the long term irrelevant slogan of 'Brits Out!' . ('1169...' Comment : the 'Brits Out!' slogan , when aimed at Westminster as is the case when used by Irish republicans , is not "irrelevant" - far from it : until that political and military 'connection' is broke there will be no political improvement in the Six County situation . And Sinn Fein has "something other" than mere 'slogans' to offer.)

But those two developments and in particular the Economic Resistance Campaign are at the root of conservative unease with the move leftwards : not only is the term 'Economic Resistance' uncomfortably reminiscent of the 'communist' Officials and their concept of a 'National Liberation Front' but it also smacks of the same politics that led to the 1970 split over recognition of the 'two States' in Ireland........ 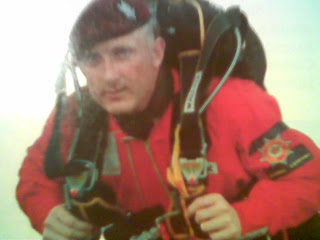 British military spy John Colin Wallace decided to contact his colleague Fred Holroyd, after seeing him on television , to look for help : " We were introduced by our Chief , Craig Smellie. I recognised Holroyd right away , even though in those days he wore a beard and dressed like a tramp as part of his undercover mission which took him south of the border . "

Holroyd revealed on the TV programme some details of the dispute between MI5 and MI6 to which Wallace traces his problems . Like him , Holroyd had been forced to quit his spy job , moving to Rhodesia where he became a Major in command of an Army battalion fighting black guerrillas .

Wallace says - " I wrote to Captain Holroyd that night , reminding him of the time when we met in the MI6 office in Ulster (sic) and asked for help in clearing my name ." Holroyd responded right away and , within weeks , he had turned up 'new evidence' to prove that Wallace could not have killed Jonathan Lewis . A vital witness , Amanda Metcalf , was interviewed by Holroyd who discovered that Metcalf had served Jonathan Lewis at her parents hotel , 'The Golden Goose' , on the A27 motorway close to the sea-side town of Arundel , long after police said Lewis must have been lying unconscious in the boot of Wallace's BBC car . Amanda Metcalf said Lewis looked grim and worried , and was with another man . Wallace believes that that man was the real killer - a business friend of Lewis who has a criminal record.......

On February 7th , 1980 , 32 women prisoners in Armagh Jail began a 'no-wash' protest : in an old jail like that , dirt accumulates far more quickly than in modern prisons . The women's periods were a particularly dangerous time for infection and several women did develop skin diseases and bowel troubles , yet their morale was higher than it had ever been .

While people on the outside were watching horrified , the women prisoners managed to remain completely united , supportive of each other , and determined to carry the protest through to the bitter end . And this they did , inflicting a defeat on prison governor George Scott's regime in the process .

The women's participation in the first hunger-strike further showed their determination : on December 1st 1980, Mairead Farrell , Mary Doyle and Mairead Nugent joined the fast . They remained on the Prison Wing , confined in an excreta-covered cell for almost two weeks , before they were transferred to the Hospital Wing of the jail . Their condition was deteriorating rapidly . The women ended their protest on December 19th 1980 , one day after the H-Block hunger-strikers , only after they had received official confirmation from the Republican Movement that the strike had in fact ended . The three women remained in the Hospital Wing until December 23rd 1980 , and were then removed and thrown back into their cells and immediately put back on lock-up , with no parcels allowed and complete loss of privileges . Subsequently the 'no-wash' protest ended in all the jails on March 1st 1981 , as Bobby Sands embarked on his hunger-strike . The women POW's were moved to clean cells where they maintained their 'no-work' protest.......

(PLEASE NOTE : this is our last '3-in-1' post for 2008 - we are not quite finished yet for the year , as we will be posting CABHAIR Swim updates and other pieces , but we will not be posting any more '3-in-1' articles untill the New Year. We will , however , be back before Christmas Day and between then and the New Year with other comments etc - Thanks!)
Sharon.

The Irish 'royal' is on the left. But only in the picture.

The 'President' of this corrupt wee Statelet , Mary McAleese , addressed her subjects yesterday from the comforts of Arizona , where she is on a mission to drum-up increased trade between our Fat-Cats and any other Fat-Cats that reckon they can make a few bob out of us. In an apparent attempt to get us to work for less than we need to pay our way , Mary stated that we were all "..."overwhelmed with greed..." ,and stated : "I think that every one of us would have to say with our hands on our hearts that we were all consumed by that same element of consumerism. Somewhere along the line we began to think that we weren't happy with deferred gratification. We had to have it now and in this moment, and I think that we have paid a very, very big price for that very radical shift..."
(From here. )

One wonders how Mary McAleese can find the time in her busy itinerary to visit Arizona especially when , as far as we know , her husbands colleague, Jackie McDonald, was not present . One also wonders if Mrs McAleese will receive an extra allowance , on top of the €6,613 per week which her spokesperson stated she receives "...for entertainment and personal expenses . The substantial proportion of this allowance goes to meet the cost of food , refreshments and entertainment.." We may yet have to do a collection , readers ......
Incidentally , Mary McAleese did not have an agreed proposer or seconder in 1997 when she sought the nomination for the position of State President from Fianna Fail . As she said herself at the time - " Either of the candidates (Albert Reynolds and Michael O' Kennedy, on the left in this photo, anyway,) could have got rid of me , there and then ; they would have been perfectly within their rights to insist that we follow the rules . That would have been the end of me and I would not have been a threat to whichever one of them was elected . I was very grateful for their generosity ."
Martin McAleese stated at the time , in relation to that same Fianna Fail nomination meeting : " When Rory O'Hanlon (Fianna Fail Chairperson at the time) told us about the new procedure (ie that Fianna Fail were willing to forgo proposer and seconder) , I couldn't believe that Albert had left the door open for her like that . I can only put it down to overconfidence on his part . If I was in his shoes , I'm afraid I would have insisted on party rules being obeyed ."
The McAleese's and their like , in Leinster House and in the Free State Senate , are non-productive leeches that are living beyond our means. They jet-set around the globe like 'royalty' on a salary and expenses that those they are obstentially 'attempting' to 'drum-up' jobs for wouldn't see in a life time. They should do the 'patriotic' thing and resign . After apologising , and paying back the taxpayer the millions that they have fleeced.
Sharon.