This Blog has been reliably informed that , contrary to speculation that Martin McGuinness will seek a six-week 'leave of absence' from his 'job' as a British Minister and Second-In-Waiting to the Throne of the 'Fiefdom Of Northern Ireland' in order that he may contest the election for the Free State Presidency , Martin McGuinness has secretly resigned from the British Stormont Administration and has been suitably rewarded by his employer for his years of service - 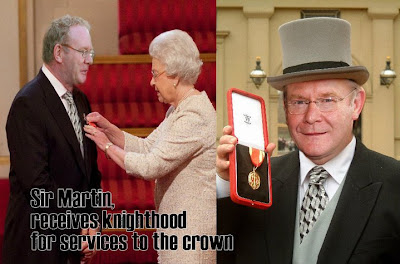 - our EXCLUSIVE !!! picture shows Lord McGuinness receiving a medal from his Majesty , Mrs Windsor-Saxe-Coburg-Gotha , who thanked Sir McGuinness "....for putting manners on the Natives and reminding them of where their place was in our society.." and slipped Viscount McGuinness a wee brown envelope , along with his wages and expenses, stating - ".....because one has been told how frightfully expensive those election things can be..".

When asked by this intrepid '1169 Reporter' to comment on his chances of being elected to the position of State President (a term which Master McGuinness objected to , claiming that it brought back woeful memories of when he had to hide from the British , rather than work alongside them) the Master(de)bater looked me squarley in the eye , through his monocle , stating - " My Dear , I don't leave anything to chance. I intend to go gunning for the other candidates but will fire several warning shots across their bow first..."
He then handed me this picture , and requested that it be published.... 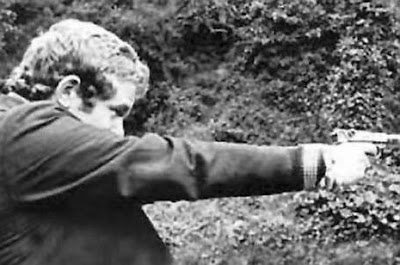 ....stating that although, truthfully, he is not known as a 'straight shooter' , he used to have plenty of friends who were 'good at that type of thing' and that he would , if necessary , demand that his aide-de-camp contact one of them 'for a favour...'
I made my excuses and left , but not before thinking how apt that actually was , as His Excellency McGuinness had , many years ago , made his excuses and left.....
Thanks for reading,
Sharon.