THE MURDER OF JOHN CORCORAN -

John O' Donoghue apparently has bought the line that the investigation of the case has been " hampered by the continued absence " outside the jurisdiction of Seán O' Callaghan - but they made no attempt at all to contact O' Callaghan on his release from jail ; indeed , even though 'MAGILL' magazine made O' Callaghan's mobile phone number available to the garda officer supposedly investigating this case , he couldn't be bothered pursuing the matter , at least until the end of January last, once his first attempt to telephone the number had failed to elicit an answer.

As we reported in the February issue of this magazine , the much-trumpeted report into the case had been completed and given to the Department of Justice before any contact had been made with Seán O' Callaghan or any contact had been attempted . In spite of this , John O' Donoghue declared to Leinster House - " I am satisfied from a report I recently received from the garda that they are pursuing the investigations as far as they can."

Is there not an extraordinary coincidence between the garda reluctance to pursue this case at all and the existence of evidence that they themselves were complicit in the murder of John Corcoran ? This evidence again comes from Seán O' Callaghan and , in this respect at least, it is compelling.......
(MORE LATER).

" When I was with the Taoiseach on 29th April he said suddenly to me - 'when you said last Tuesday that you thought that the Government might be secretly involved I saw RED , I was not able to speak to you I was so furious'. "

APRIL 22nd , 1970 :
" This was Budget Day and , during the morning, the Commissioner telephoned me to say that the Minister for Finance , Mr Haughey, had had an accident in a fall off a horse and that he was in the Mater Nursing Home. I informed the Taoiseach who had already heard from another source. Later , the Commissioner phoned me again to say that a strange rumour was circulating in North County Dublin that Mr Haughey's accident occurred on licensed premises on the previous night.

Within a couple of days there were all sorts of rumours in golf clubs , political circles etc as to how the accident occurred , with various husbands , fathers , brothers or lovers having struck the blow in any one of dozens of pubs around Dublin. In short , the accident served a Rabelaisian purpose without anybody really believing that it was other than a fall from a horse......."
(MORE LATER). 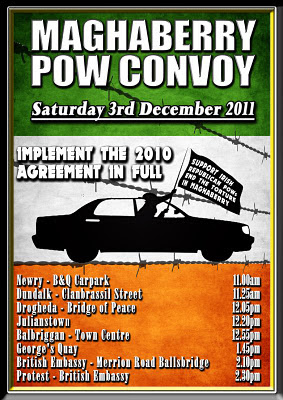 This is an Independent event organised by Duleek Independent Republicans. That organisation are appealing to all Irish Republican organisations/independents to participate in this convoy from Newry to the British Embassy in Dublin to demand the full implementation of the 2010 agreement.
All participants are asked to decorate their vehicles with flags, posters, etc relevant to the convoy theme, "IMPLEMENT THE 2010 AGREEMENT IN FULL" . Let the message be loud and clear that Irish Republicans are not going to stand idly by and allow Republican prisoners to be criminalised.
The convoy will pass through Dundalk, Drogheda, Julianstown, Balbriggan, George's Quay, Trinity College and out to the British Embassy at Ballsbridge , where a one hour protest will take place outside the embassy.
Please forward the word and encourage as many as possible to participate. 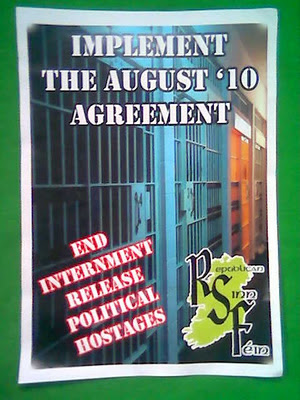 A recently-produced (by RSF) POW poster , on display throughout the State and in the Occupied Six Counties. 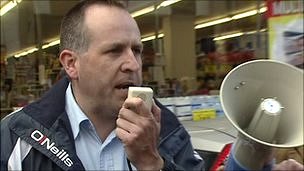 Republican Sinn Féin held a very successful protest at the main entrance to Croke Park on November 25th , 2011 , against the presence of the RUC/PSNI in the stadium, defying an attempt by the 26-County police to close the road to any protests. Inside a team from the 26-County police were playing a team from the RUC/PSNI in a Gaelic football match.

Speaking at the protest the President of Republican Sinn Féin Des Dalton said: "The protest today is about driving home the message that British occupation of any part of Ireland is neither normal nor acceptable. The presence of the British colonial police in Croke Park is a betrayal of the principles upon which Cumann Lúthchleas Gael was founded. Foremost amongst these principles is Ireland’s right to its essential unity as a nation. The GAA has never recognised the British-imposed border but today the leadership of the GAA has allowed the same British forces who deny that unity of Ireland on to the pitch at Croke Park.

The GAA is being hijacked by the British and 26-County political establishments to bolster their campaign of normalising British rule and the partition of Ireland. The very fact that this game is being played behind closed doors and under tight security tells us that it is far from normal. If, as we are constantly told, that relations with the British State are now normal why all the secrecy and security? The truth is that British rule in Ireland will never be normal." Republican Sinn Féin is to be congratulated for , once again, publicly highlighting the on-going injustice that is the British military and political presence in Ireland.


'SIT-DOWN' MORE EFFECTIVE THAN A MARCH : On July 6th 1953, 1,000 unemployed people sat on O' Connell Bridge , in Dublin, for 15 minutes holding up traffic - they were protesting a three-day waiting time for relief (unemployment benefit/dole) money.

In the opinion of this blog , a sit-down protest in the main street of a city/town would be a more effective form of social protest than a march through that main street : with yet another savage budget due to hit employed and unemployed in this State within the next week , the trade union movement - such as it is - should begin organising sit-down protests in as many areas as possible and should maintain same until such time as major financial changes are introduced ensuring that the poor and the poorly paid stop being victimised for the 'mistakes' and/or greed of the politicians and their banker colleagues. But that's not likely to happen any time soon , as it appears that the trade union movement in this State has more in common with those politicians and the bankers than they have with those they are supposed to represent.
Shame on them.
Thanks for reading ,
Sharon.