'THERE WILL BE ANOTHER DAY.....' By Peadar O'Donnell ; first published in January 1963.
Trade union leaders in Dublin were undoubtedly on friendly terms with IRA officers , who trusted them absolutely : trade union rooms were used for IRA meetings , which wanted men attended , and Tom Johnson wrote the draft for the Democratic Programme of Dáil Éireann. The Labour Movement did , indeed , demonstrate independently that it had ends of its own to serve - it celebrated the first anniversary of the Russian Revolution by an overflow meeting in the Mansion House in Dublin and it staged demonstrations against British crimes in Ireland ('1169...' Comment : ....whereas today trade unions will avail of the services offered by those same British criminals..) and Tom Foran , General President of the Irish Transport and General Workers' Union , publicly described those demonstrations as dress rehearsals for 'The Workers' Republic'. As an official of Foran's and O' Brien's union , I came within hearing of the buzz of excited talk around union headquarters at Liberty Hall : I was lucky enough , while a student teacher in training in Dublin , 1911-1913 , to become interested in Labour papers and run into Labour meetings. It was my good luck that just then an uncle of mine , Peter Rodgers , home from Butte , Montana , where he was an active 'Wobblie', was on hand to sharpen , still further , my awareness of the class struggle. It did not seem strange to me , therefore , that the people I met at Liberty Hall should emphasise that the real fight would begin when the middle-class tried to duck out of the Republican struggle on terms that would suit them , but betray the Revolution. When that time came the Labour movement - to me that always meant the trade union movement - would take on the role which the Citizen Army played in the period of confusion on the eve of the 1916 Rising : it would be the point of rally for the independence movement in its second hour of crisis. I accepted this view of things eagerly..... (MORE LATER).

THE PETER BERRY PAPERS....... The Top Secret Memoirs of Ireland's Most Powerful Civil Servant : Dirty Tricks, Election '69/ Spying on a Unionist Politician/ Keeping the (State) Taoiseach informed/ The Garda Fallon Murder/ Advice to Jack Lynch- 'Fire the pair of them...'/ Vivion De Valera's advice to O'Malley/ Rumours of a Coup D'Etat/ The Internment Plot, November 1970/ Secret Meeting with William Craig. From 'MAGILL' magazine , June 1980.
" The Committee of Public Accounts had asked the Manager why documents had been released from the account when the banks re-opened despite the fact that the police had been making enquiries and the Manager's reply was that a request from the Department of Finance to retain all documents did not come until afterwards ie in late September or October. But , as I explained earlier, I had made this request for the retention of documents in the previous May and had been given to understand from the Group Law Agent that the bank would co-operate. The Committee's questioning of the Manager was sharp and his replies and actions in some other respects were commented on. The Report of the Committee has strictures ; on page 59 it has this to say - '.....moreover , the evidence given on behalf of this bank was unsatisfactory and the Committee did not receive from this bank the assistance it had a right to expect in tracing the money that passed through these accounts...' . If the Committee had had knowledge of my request , on behalf of the Minister for Justice , in May 1970, their strictures would , doubtless , have been ever more severe......." (MORE LATER).

Sean Fitzpatrick and Lar Bradshaw were great friends at the time - 'golf buddies' - and each was seen by their wannabe 'golf buddie' admirers as 'occupying the space' where they , themselves, hoped to exist one fine day : a 'Captain of Industry' , with connections to political bosses , property speculators and the so-called 'Leaders' of society. Life was good for Sean and Lar.
The jobs ('Positions') they held in their respective fields were extremely well paid and included a huge expense allowance as it was recognised , by their Boards , that 'entertaining clients' was an important part of their working day. Sean was a Bank Boss , in charge of 'Anglo Irish Bank' and moved in circles that were even too rich for him - one of his best known 'business deals' that , like 'his' bank , went sour on him , was an investment he made with, amongst other such luminaries , the 'King' of Morocco - both were involved in a (failed) casino and theme park operation in Macau , a so-called 'SAR' of China.
Anyway , back to this particular aspect of his dealings in Dublin : Sean was a Board Director of the Dublin Docklands Development Authority (DDDA) , where his 'golf buddie' , Larry Bradshaw , was the boss and, by pure coincidence , Larry was a Board Director of Anglo Irish Bank , where Sean was the boss ! In 2006 , with hundreds of millions of taxpayer-supplied Euro at his 'disposal' , Larry thought it would be a good idea to spend €412 million to purchase a (contaminated) 25-acre site in Ringsend , Dublin , and Sean's bank (!) was , fortunately (!) on hand to part-finance the 'deal' : the rest , as they say , is history , and is but one signpost on the crooked road that has taken this poxy State to the position it's in - a financial and moral basket case , with our interchangeable 'leaders' in Leinster House - who would be no strangers to lifting their little fingers on a golf course with the likes of Sean and Lar - completely uninterested in any aspect of the above and similar scandals : their one and only concern is to ensure that they remain in Office long enough to qualify for their pension.
But even at this late stage , there is a solution - the alternative is to carry-on as we are , changing the colours every few years of the political and business criminals that have elbowed their way to the taxpayer-funded pension-trough that State politicians and their property-speculating business friends are up to their worthless , non-productive necks in. We owe it to future generations to take a stand now.....
400 X 3 + 250 X 4 + 50 X 5 = 2,450...... 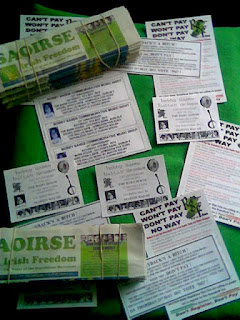 RSF leaflets for 5th May 2012.
RSF Head Office has prepared 2,450 Republican leaflets for distribution at this years Bobby Sands Commemoration which will be held in Dublin on Saturday 5th May 2012 : these leaflets have been assembled in 'packs/booklets' , 400 of which will contain three leaflets , whilst 250 will have four leaflets and 50 will have five leaflets , giving a 'pack' total of 700. It was suggested by Head Office that any 'packs' left over be distributed at the function that same night in 'The Barn House' pub , to which the leaflet team replied "God Bless your innocence...." !
Experience has proven to myself and the rest of the leaflet team that the 700 'packs' we have will be gone before the Commemoration is over and , had we had 1,000 packs , we could have distributed them no problem. So , if you're looking for an 'RSF Leaflet Pack' on Saturday 5th May 2012 , your best chance to get one will be between O' Connell Bridge and the Ambassador from 12.30 pm to , hopefully , about 2.30pm. After 2.30pm , your chances are slim to none ! See you in Dublin City Centre that afternoon , or at the gig that night....
Thanks for reading,
Sharon.